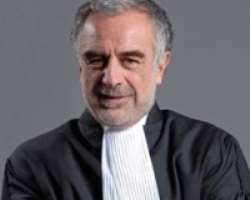 THE International Criminal Court (ICC) and the International Labour Organisation (ILO) were among global bodies that expressed concern over the crisis in Libya yesterday.

Also, United States-based Nigerians and the African Union (AU) have spoken out against the situation in Libya and urged the Federal Government to condemn the state violence and extra-judicial killings against the unarmed Libyan people and potentially against Nigerians in Libya.

Much violence is being reported in Libya and world leaders are also warning that the actions of the Libyan ruler, Col. Muammar Gaddafi and of his government are crimes against humanity.

Gaddafi has told state TV that Osama bin Laden and his followers are to blame for the protests wracking his country.

In a phone call addressed to residents of the town of al-Zawiya, Col. Gaddafi said young people were being duped with drugs and alcohol to take part in 'destruction and sabotage'.

Col. Gaddafi said the protesters had no genuine demands and were being dictated to by the al-Qaeda leader.

'Bin Laden… this is the enemy who is manipulating people. Do not be swayed by bin Laden,' he said.

'It is obvious now that this issue is run by al-Qaeda. Those armed youngsters, our children, are incited by people who are wanted by America and the western world.

'Those inciting are very few in number and we have to capture them.'

From the U.S. came a call from the American arm of the Pro-National Conference  (PRONACO), where the group's chairman, Dr. Baba Adam, released an open letter to President Goodluck Jonathan, urging the Federal Government not to remain quiet on the situation.

His letter came on the heels of the statement of the AU also expressing deep concern on the Libya's crisis and deciding, 'to urgently dispatch a mission to Libya to assess the situation on the ground.'

In a statement after its meeting on Wednesday in Addis Ababa, the AU's Peace and Security Council said the continental body 'strongly condemns the indiscriminate and excessive use of force and lethal weapons against peaceful protestors, in violation of human rights and International Humanitarian Law, which continues to contribute to the loss of human life and the destruction of property.'

But the ICC said it could only intervene if the Libyan authorities accept its jurisdiction through article 12(3) of the Rome Statute.

In a statement made available to The Guardian yesterday by ICC's chief prosecutor, Luis Moreno-Ocampo, on the uprising in Libya, he said the decision to do justice in Libya should be taken by the Libyans themselves.

'The decision to do justice in Libya should be taken by the Libyan people. Currently, Libya is not a State Party to the Rome Statute. Therefore, intervention by the ICC on the alleged crimes committed in Libya can occur only if the Libyan authorities accept the jurisdiction of the Court, (through article 12(3) of the Rome Statute).'

He added: 'In the absence of such step, the United Nations Security Council can decide to refer the situation to the court.  The Office of the Prosecutor will act only after either decision is taken.'

Reports yesterday said that army units and militiamen loyal to Gaddafi struck back against rebellious Libyans who have risen up in cities close to the capital, attacking a mosque where many were holding an anti-government sit-in and battling with others who had seized control of an airport. A doctor at the mosque said 10 people were killed.

The assaults aimed to push back a revolt that has moved closer to Gaddafi's bastion in the capital, Tripoli. The uprising has already broken away nearly the eastern half of Libya and unravelled parts of Gaddafi's regime.

The security of workers in the troubled Libya has formed a major concern for the International Labour Organisation (ILO).

The Director-General of ILO, Juan Somavia, in a statement yesterday, charged Libyan leaders to put a stop to the killings of demonstrators.

He said: 'Libyan leaders must put an immediate stop to the massive killings, large-scale violence and generalised repression unleashed against peaceful demonstrations of people exercising their legitimate rights to freedom of expression and assembly.'

He added: 'Of grave concern to the ILO is the plight of domestic and migrant workers and their families caught in the midst of this deepening humanitarian, social and political crisis. Their rights, voices and dignity must be respected.

This includes respect for the basic right to freedom of association of employers and of workers.'

The standards supervisory bodies of the ILO have repeatedly requested Libya to let workers set up and join organisations of their own choosing. The ILO has expressed strong concern that people who have tried to exercise this right have been subject to repressive measures, including forced labour.

The ILO Director-General stated: 'National and international conditions must be created for a peaceful resolution of this conflict. The will of the people must be listened to, including importantly the representative organisations of workers and of employers.'

The Director-General of the ILO stressed that the Libyan people deserved to benefit from a sustained effort for development with social justice which gives all women and men, and particularly youth, their rightful share in the fruits of progress and respects dignity and basic rights through decent work.