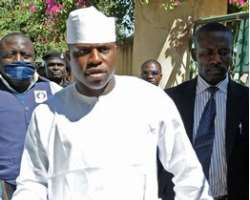 Huhuonline.com can disclose that the Nigerian House of Representatives, Thursday, passed the Freedom of Information Bill (FOI), 11 years after it was first introduced in the National Assembly. The Joint Committee of the House,   Information and National Orientation and Justice, which rounded off work on the bill which had inputs from the Open Society Justice Initiative and other media rights groups presented it to the House which deleted clauses 12 and 18 because some other sections in the bill had dwelt on the issues in the sections.

Several areas treated by the joint committee in the bill include rights of access to records, information and government institutions, request for access, notice about where access to records are requested, transfer of request, extension of time limits, where access is refused, and action for waivers, destruction or falsification of records and where information is not available in discreet form.   Areas of waivers in the Act which were treated are International Affairs and Defence, in which case the head of government or public institution may refuse to disclose any record which may be 'injurious to the conduct of international affairs and the defence of the Federal Republic of Nigeria. '

Immediately the bill was passed, stakeholders in journalism as well as civil and human rights groups hailed the decision of the members with some calling on the Senate to follow suite.

The bill which had several times been rejected by the members for fear that it would be misused by the public was sponsored by Abike Dabiri-Erewa.   The legislator who was visibly elated was at the passage of the bill and   lauded   the efforts of the Civil Society groups in the Country for not relenting in the push for action.   In her words, 'with the passage of this bill, we've taken a major step and I am happy that the bill has been passed under the leadership of Dimeji Bankole.' She urged the Senate to hasten the passage of the bill.

Minority Leader of the House, Femi Gbajabiamila, who also spoke on the issue, said the passage of the Bill was the result of the persistent struggle of opposition forces to the status quo and a sign that the House is disposed to democracy.   He said: 'It's a welcome development and its long overdue. It will stimulate good governance which is predicated on access to information.   "This shows that the House of Representatives is a listening House.

'   The House spokesman, Eseme Eyiboh, also explained that the passage of the bill by the House will bring more responsibility and accountability into governance.   He said:

'We have now entered into a new regime of responsibility and accountability.'   The Nigerian Guild of Editors (NGE) in a statement by its President, Mr. Gbenga Adefaye, said:

"This is   the second time within a decade, that the House would respond to our collective hunger for openness and transparency in the administration of the Federal Republic of   Nigeria. The FOI law will certainly aid accountability in our public life.

'For the Guild, it is remarkable that the leadership of the House of Representatives has kept its words to the Guild, to pass this bill because it agrees that the nation (not just the media) needs it. The Guild will like to note also the concurrence of the leadership of the House that a Freedom of Information Law will make legislation easier as nobody in the Ministries and the MDAs can withhold information that is needed for public good - whether for legislative purposes or basic information and education of the citizenry by the media.

'The Guild now calls on the Senate to borrow a leaf from the House of Representatives by passing the Bill early enough for Presidential assent. We are delighted that the Minister of Information and Communication, Mr. Labaran Maku, had during the biennial convention of the Nigerian Guild of Editors in Lagos last month, publicly committed to lobbying for Presidential assent of the Bill once it is passed by the National Assembly.

We expect him to honour his words, once the Senate does its patriotic duty of opening up the system for accountable government.

'While we wait to see the content of the Bill as passed by the House of Representatives, the Guild would like to put the media on notice that a Freedom of Information Law only helps to foster a   more informed and socially responsible press.'

President of the Nigeria Union Journalists, NUJ, Mr. Garuba Mohammed, also called it was a victory for democracy saying would promote accountability, transparency and good governance as well as enhance investigative journalism.

He said:   'It is a welcome development and a very bold progressive decision by the House of Representatives. As you are aware, the agitations for the FOI have been for a while. It is very progressive. It is a victory for Democracy. It will enhance accountability, transparency and good governance.

"For the media, it will enhance investigative journalism. We hope the Senate will also pass the bill before the legislative year so that the two Chambers can harmonize it for Presidential asset.   I commend the House of Representatives. I have gone through the bill as passed, I think it is fair."

Also, the Socio-Economic Rights and Accountability Project (SERAP) in its statement, obtained by huhuonline.com said, "it was an important development, which will improve the waning fight against corruption in the country".

The statement which was signed by its Executive Director, Adetokunbo Mumuni, said: 'Every elected leader has a responsibility to enable and ensure that the citizens fully enjoy their human right to know, and we applaud the role and leadership of the House of Representatives on the passage of the bill.'