Yes, I have been heartbroken so many times —Bukky Wright 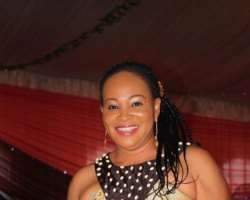 She is as popular as the Yoruba home industry! Indeed, she is one of the gladiators in the nation's movie industry, otherwise called Nollywood. As an actress, beautiful Bukky Wright enjoys some kind of cult following, especially because she is usually very much at home with any given role in movies and on television. In the past years, her marital life, in particular, has been a subject of heated discussions among her fans. In this no-holds-barred encounter with BAYO ADEOYE, Wright, mother of two, talks about a number of seriocomic issues that have defined her inspirational journey in life

A lot of bad stories have been written about you in the past. Doesn't this bother you?

Yes, as a human being, it does. But usually, I just think about it for a few minutes and I move on.

But at what point in your life did you resolve not to be bothered about such stories?

When some stories are written about you so many times, it gets to a point that you just stop being bothered about them. I just feel perhaps that is how they want to sell their newspapers. As a human being, I always say that life and business are like a race; so, if you want to win a race, you don't look back or worry about what anybody is talking or writing about you.

Can you recall any particular negative story that had been written about you in the past which you cannot forget in a hurry?

I don't think about my past but my present. It is just like writing a story and producing it; once I am through with it, I forget it and begin to think about another one. Also, it is like a Yoruba adage that says “Eni ti o su ni o gbagbe; eni ti o ko o ni gbagbe.” (Meaning he who harms forgets; but the harmed doesn't forget easily). If you believe that you can spoil the reputation of anyone with impunity, then, you should realise that what goes around comes around.

In this wise, if anyone writes a bad report about you and he forgets it as soon as it is published, then, you at the epicentre of it all should not forget whatever the negative story that might have been written about you.

Yes, I might not forget, but I don't like to dwell on the past. But if you insist, I will tell you that I remember one that said, “Bukky Wright is a lesbian” and “Gbenga Daniel beats wife over Bukky Wright.”

If those stories did affect you psychologically, how long did it take you to get over it?

It affected me psychologically for some time, but I later forgot it and moved on. Having weighed the pros and cons of it, I just concluded that after all, they didn't say I was a thief.

But do you realise that there is no smoke without fire? And if you believed you are not what they claimed you are in the stories, what
action did you take?

Recently, you told a magazine that you intend getting married soon, how soon is the marriage coming up?

I am getting married soon, but I can't tell you exactly when.

If you are to write your autobiography, what events or incidents will occupy prominent chapters?

Everything about my life is important.

But certain things must be especially memorable in your life?

Okay, my parents, my children and people that I have met on my way while growing up. I would also talk about people that have tried to make or break me.

Who are the people that have tried to break you and in what way?

I guess you must have suffered some setbacks in your career and in life, generally?

You will definitely experience some setbacks in your career. Again, you can't tell me that everybody you have met while growing up in your career has been good to you.

So, when specifically have you suffered a setback in life?

As a human being, you sometimes get yourself involved in something and you feel like, 'Oh! God, I shouldn't be here.' At some point in life, you sit down and think of some mistakes you've made in life. But as a human being, you think over it and move on.

Earlier you talked about your parents, your children and some other people that you have met on your way up in life, but you never mentioned the father of your children. Would you react to this?

That's why I said you might have met some people that would try to make or break you.

Could you share with me some fond memories of your relationship with the father of your children?

Oh! Fantastic! It is because he gives me what a lot of people in life will not be able to get with millions of dollars! That's why he cannot be in my black book.

If he had done that for you, why did you part ways?

It is not every relationship that you are into that will last forever.

What did you learn from that relationship while it lasted?

I learnt that whatever you do, whoever you are and wherever you find yourself in, just thank God.

How did you meet the father of your children?

I met him through a friend; we were friends and later became lovers.

How tough was it when you had to part ways?

It was very tough. No woman in her right senses will ever pray for such a thing. But there are some situations you find yourself in life that you can't help. No woman would like to leave her first husband for another man. A lot of women out there would have tried to make their marriages to work, but when they don't work out well, what should they do? That means they are not meant to be together because the will of God will always come true. If the will of God says you will remain as husband and wife, no one can decide otherwise. I don't blame anybody for whatever happens to him or her.

Were you heartbroken when it happened?

Oh! Yeah, I was heartbroken. I know every woman out there prays to have a good home and pray to have a husband to call hers.

How many times have you been heartbroken?

How many times have I been heartbroken? Many times, and it doesn't have to be through relationship alone. You could heartbroken by some experience you suffered in the hands of some friends. As long as you live, you will be heartbroken one way or the other.

Were you affected mentally?

Never! I tell people that no matter how badly I am heartbroken, it never affects me mentally.

You later had another shot at marriage. Were you under any pressure to go into it?

As I said, each time you fail, you keep trying your best.

Maybe there were some things you did not do right in those two relationships as a wife?

I can't say because I don't know. I know I tried my best, but I guess my best was not good enough. But I will tell you one man's meat is another man's poison.

What did you do wrong that you wish you could go back and correct?

I am not going to apportion blame this time around. But I will say that you should accept whatever happens to you in life. You see, if I was still married to the father of my children, there wouldn't have been that household name called Bukky Wright today. This I know for sure. So,
I see it as God wanting me to go somewhere else and do something else.

So, I will be right to say that you sacrificed your marriage for stardom?

I didn't purposely do it, but it has happened. And there is nothing I can do about it. That is why I keep saying that the will of God will definitely come to pass.

You have been in two failed marriages and when they talk about artistes who are single mothers, your name comes up. Are you still nursing the hope of getting married someday?

The will of God will surely come to pass in one's life. I would say never say never! I don't care if they call me a single mother!

Is it one of your prayer points that God should give you another husband?

Yes, I tell God that I want to have a home!

That means you are nursing the dream of having another husband?

Any reasonable woman will nurse the dream of having a man of her own and any man will nurse the dream of having a woman of his own. If you don't think of anything else, you will think of getting home to meet a companion. Again, when you are old, there will be a time that all your children will grow up and leave your home to raise their families. So, you will be left with either your wife or husband.

In my interviews with some women, they made me realise that one of the reasons they went into another marriage after their first marriage broke up was because they could not do without sex. So, they said preferred to remarry rather than jump from one bed to another. Could this be your own reason too?

That is why I told you that any woman will love to have her own husband. I will love to get married again so as to have a man to call mine.
You lost your mum three years ago. What do you miss most about her?

I miss her so much. She was my friend, my companion and my confidant.

How bothered was she about your failed marriages?

Oh! She was very bothered. No mother would love to see her daughter's marriage collapse. She never liked it, but nobody can change the will of God.

But I learnt she was instrumental to the collapse of your second marriage. It was reported that she joined hand with you to send your husband away when he alleged that she was responsible for the miscarriages you had. Would you react to this?

People say and write different kinds of things, but I will tell you that no responsible mother will send her daughter's husband away. She is dead now, so don't let us bring her into this discussion.

Apart from the death of your mother, what else has ever moved you to tears?

It was the death of my father. He meant a lot to me just like my mother.

Were they still married at the time of their deaths?

My mother was leaving with me when she died.

Recently, it was also reported that you adopted the name Wright. So, what is the real name of your biological father?

I am happy that my father was alive at the time the story came out. And he was never bothered. He told my mother that he was not bothered because she never told him she had me for another person. And my father never in his lifetime disowned me as his child.