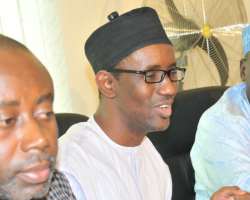 ABUJA, Feb 23, (THEWILL) - The House of Representatives today declared that it has commenced investigations into the operations of the Economic and Financial Crimes Commission (EFCC) over the ‘missing’ N20 billion naira recovered from the former Inspector General of Police, Mr. Tafa Balogun. The money was allegedly stolen from the police force by Balogun.

Mallam Nuhu Ribadu, the Presidential candidate of the Action Congress of Nigeria (ACN), was the Chairman of the Economic and Financial Crimes Commission (EFCC) at the time the agency successfully prosecuted the ex-police boss and recovered the funds.

The disclosure was made during the consideration of a “Bill for An Act to Establish the Nigeria Police Fund and for Matters Connected Therewith, 2010”.

Before the Bill was referred to the Police Affairs Committee for “a two-week investigation”, Chairman of the House Committee on Aviation, Hon. Halims Agoda (PDP/Delta), had drawn the attention of the House to the alleged disappearance of the funds recovered from Balogun, urging the House to expedite action on its recovery.

He said: “While we are all concerned about the paucity of funding for the Nigerian Police Force, in spite of rising insecurity, we must, as a House, bear in mind that the N20 billion recovered from Former Inspector General of Police by the EFCC (Economic and Financial Crimes Commission), just disappeared into nowhere.

“So the EFCC and the police must produce this money, because it belongs to the Police and must be returned to the Police. Mr. Speaker, my dear colleagues, we cannot afford to have the money go like that. It is the responsibility of this House that money is recovered and sent back to the Police Account,” he charged.

The lawmaker alleged that funds earlier raised by other sources, without the approval of the National Assembly for police, were swindled by President Olusegun Obasanjo Government (1999-2007).

“It can be recalled that past efforts were made to set up a fund for the Police, but the past administration wasted the funds,” he alleged.

It was at this point that the Speaker asked the Chairmen of Committees on Police and EFCC that: “Where is the money? Where is the money?” The query led to the resolve by the House to direct the Committee on Drugs, Narcotics, Economic and Financial Crimes Commission launch an investigation.