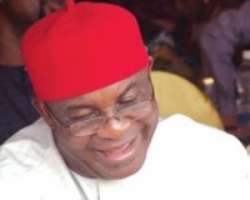 It suspended its relevant rules yesterday to treat the bill expeditiously. The bill, which stipulates N18,000 as minimum wage in the country, if concurred by the House of Representatives, will substitute the extant National Minimum Wage Act, which pegs minimum wage at N7,500.

Section 2 (1) of the bill says 'As from the commencement of this Act, it shall be the duty of every employer to pay a wage not less than the national minimum wage of N18,000 per month to every worker under his establishment.'

The Lower House also yesterday passed into law the long awaited Anti-Terrorism Bill, a week after the Senate endorsed its version of the legislation.

Thrice, President Goodluck Jonathan had written a letter of appeal to the Legislature on the need to pass the bill in compliance with the International Convention on Terrorism.

The Deputy Senate President, Ike Ekweremadu, said the planned law would give Nigerian workers some relief.

'We have responded appropriately to the yearnings of our workers whom we are representing in this chamber. Today (yesterday) is a happy day because we have shown that we are conscious of the sufferings of our people. This country is rich enough to cater for everybody if we avoid the avarices of a few people.' he said.

He advised the workers to reciprocate the gesture through dedication to work and fulfilling their obligations. 'The need has come for us to pay more tax to support the new wage,'' he remarked.

Leading the debate, the Senate Leader, Taslim Folarin called for the amendment of the constitution to allow state governments legislate on workers' wages.

The Deputy Senate Leader, Victor Ndoma-Egba, noted that Nigerian workers deserve more than the N18,000, adding that the current standard of living in the country must be captured.

The Chairman of the Independent National Electoral Commission (INEC), Prof. Attahiru Jega, also took his quest for more funds to the Upper House. He told the lawmakers that if the N5 billion budget proposed for the production of the permanent voter's card was not approved, many voters in the country would not have the card.

At a budget session with the Senate Committee on Electoral Matters, Jega said the commission had proposed a budget of N5 billion for the project but the Federal  Ministry of Finance reduced it to N2.755 billion, which was not adequate for the exercise.

He explained that in the just concluded voters' registration exercise, the commission recorded about 67 million voters and would continue to register more Nigerians after the April elections.

He disclosed that in the budget for 2011, the commission made a proposal for 80 million permanent voter's cards with the hope that the number of eligible voters would increase after the elections.

'Although we have not registered up to 80 million voters, but after elections, there will be continuous registration and we have to start the preparation now. The earlier we make provision for the permanent voter's card, the better. We made a proposal of N5 billion but it was reduced to N2.7 billion. If it is left the way it is, we will have a problem because we won't be able to give the 67 million registered voters the permanent cards,'' he said.

Jega also told the committee that the commission had been bombarded with requests for funds by civil society organisations, adding that within the last six months, INEC has received requests amounting to about N1 billion.

The Lower House had last week started the clause-by-clause consideration of the anti-terrorism bill and adjourned till yesterday.

The bill provides a legal framework for the prevention, prohibition and combating of acts of terrorism in Nigeria, as well as prescribes penalties for violating any of its provisions.

Section 2(c) of the bill defines an 'act of terrorism' as anyone involved or causes an attack upon a person's life which may cause serious bodily harm or death; kidnapping of a person; destruction to a government or public facility, transport system, an infrastructural facility including an information system, a fixed platform located on the continental shelf, public place or private property likely to endanger human life or result in major economic loss. The seizure of an aircraft, ship or other means of public or goods transport and the use of such means of transportation for any of the purposes…'

According to the bill, a person who belongs or professes to belong to a proscribed organisation commits an offence under this Act and shall on conviction be liable to imprisonment for a maximum term of 20 years.

'For avoidance of doubts political parties should not be regarded as proscribed organisations and nobody should be treated as such because of his/her political beliefs.'

Meanwhile, the House of Representatives Committee on Police Affairs has said it would commence investigations into the procurement of equipment for the Nigerian Police Force in the 2010 budget, which is expected to lapse on March 31.

Chairman of the Committee, Abdul Ningi who made the disclosure when the ministry appeared before it for at a budget defence session, said the panel was worried by the trend of low capital budget releases to the ministry by the Budget and Procurement offices in the Presidency.

Meanwhile, the Minister of Foreign Affairs, Odein Ajumogobia, has alerted of fresh threats by some countries to take over property belonging to Nigerian missions due to outstanding debts.

The minister, who disclosed this yesterday during 2011 ministry's budget defence before the Senate Committee on Foreign Affairs led by Senator Jubril Aminu, said the structures were in bad state due to paucity of fund.

Ajumogobia also disclosed that the directive of President Goodluck Jonathan to open two additional missions, in Southern Sudan and Africa South America (ASA) Summit in Caracas in Venezuela might not be feasible because there was no money.

The minister painted a worrisome picture of the nation's missions. 'Many missions therefore owe arrears of salaries to staff. Many others have borrowed from lending institutions as a stop-gap measure. I must say that the cause of this state of affairs is attributable to perennial underfunding of our activities,' he said.

Asking for improvement in the financial provision for the ministry, he said: 'This ministry's budget envelope is grossly inadequate to meet its requirement at headquarters, directorates/parastatals and overseas missions. It is clear from analysis that this Ministry's 2011 proposed budget would hardly provide the needed impetus required of the Ministry towards achieving the Vision 20:2020.'