WILL NIGERIA CONTINUE TO KILL THE CHAMPIONS OF RENAISSANCE? 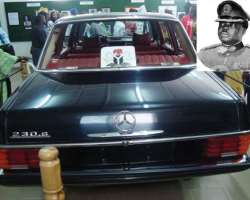 Those who do not have a sense of history are goading history and indeed historical events to repeat themselves. If this recurrence is just about mere tales and pleasantries, we need not worry and I would not bother myself to remind us of some of these gory past of our nation that keep reoccurring. Three decades and five year have gone by that our beloved Murtala Ramat Mohammed was killed on his way to work in the glare of everyone in the city of Lagos. Many more Nigerians have been killed just like that, if not in more horrendous manner. I am not writing this article to remind those who lost their beloveds or breadwinners, of the painful passing of their loved ones, but to remind Nigeria and indeed Nigerians that we need not forget these deaths, not just of Murtala, but countless others who have been killed by Nigeria or indeed those who hold sway in steering the ship of our nation.

Sunday the thirteenth of February was the anniversary of Murtala’s killing and I looked around Nigeria but there was neither sound nor comments to remind us that a former president of Nigeria was killed on that day. Not even from the Presidency. Everyone seems to be consumed by the fervent of elections in the urge to have yet another go at the plundering of our nation. Have will all forgotten? This ‘national amnesia’ reminds me of that saying that ‘Nigeria is not worth dying for’. Rightly so, this saying has been confirmed again and again in the very short history of our nation. As a people and a nation we seem to have developed a permanent amnesia for our painful past and, also those glorious past, which ought to have inundated the tales and stories that we pass on to new generations. These reminders are essentials ingredients for keeping alive those essences of our core values as a people and a nation. No wonder our value systems are fast eroding and being replaced by new cultures and new value systems which in my opinion are alien to Nigeria, at least the good old Nigeria.

In half a century of our existence as a nation, many fighters in this category of the champions of renaissance have passed on and it amazes me that everyone moves on and we soon forget the labour of these heroes. Or have we stopped singing that verse of our national anthem or does that mean these words mean little or nothing anymore to the mind of the Nigerian? Beyond those attempts to associate with and offer glorious tributes at the burial of these men and women who died in their quest for a new Nigeria, even by those who in their lifetime did all they could to kill them, kill their spirit or convert them to join the leagues of looters and destroyers of our nation, we should develop a psyche that remembers these Nigerians. It is even the more incumbent on us as a nation and a people if they were killed in mysterious circumstances and for sheer fact that their convictions and selfless quests run contrary to the biddings of those who lord it over us. This reminder is essential for healing the nation.

Someone might ask, what about the monuments? For me, those monuments are rather pacifiers conceived mostly in bad faith, assuming all these champions have a monument to their legacy. Even when the monuments are good intentioned, they have become just names, reminding us nothing about the virtues of these noble men and women or indeed what they died for. The generational amnesia is so virulent that we have stopped asking to be reminded of these champions.

Murtala Mohammed is just but one of the many Nigerians who have been killed for being the champions of renaissance. This man, killed thirty-five years ago at the age of thirty-eight was symbolic of the quest for renaissance. What shocks and still inspires me about him and his life, particularly as the president is the restitutions he made, though not a born-again Christian, the purging and restructuring of the civil service and government parastatals, the demobilization of the military from politics, and those beautiful plans for which some other folks would later take the glory. One other thing unique about his presidency is his very simple and humble lifestyle, devoid of the roguish and brutal styles that have become the penchant of those who led Nigeria after him, including the military and civilians. The man demystified power. Murtala did not move about Lagos or the rest of Nigeria harassing and mutilating other Nigerians on his path.

Though some still feel very aggrieved till this day for the purging he did, I empathize with them, but that singular act was exactly what Nigeria needed at the time to move on and in the right direction. Thirty-five years down the line, government in Nigeria has become so over bloated that seventy per cent of the national budget goes for recurrent. We have been busy eating away our tomorrow. The massive investments in infrastructure in his short reign lasting only 200 days as a president has not been beaten by any other. No wonder the destroyers of our nation had to kill him.

And indeed, they continue to kill anyone who dares to champion renaissance. Those they would not kill, they lure and entice to join the depraved plundering of our commonwealth. No wonder, the instinct of an average Nigerian these days no matter their religion or ethnicity, education or political inclination is to join in the plundering, even when that illegal cut from the national cake is but a ridiculous piece compared to what they would have had were equality, transparency, distributive justice and priority for the nation’s interest being applied in the use of our resources.

As the years go by, we keep losing out on the opportunity for renaissance because Nigeria has continued to kill the champions of renaissance. Not many Nigerians can fearlessly champion renaissance, even those who are busy calling for revolution. May be we need a reminder; there can never be a revolution when the nation continues to kill those who dares to dream of a better a Nigeria. Those who dare to dream and yet value their lives have left the nation in droves, in the quest for lands with opportunities for their dreams to blossom.

With the alarming increases in all the ironies of a nation and her institutions, the pains of a people and daily loss of selfhood, the need for renaissance has never been more compelling. But I ask, will Nigeria continue to kill the champions of renaissance?

Taofeek Ramat is at [email protected]