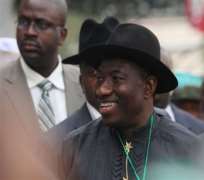 The self styled Asiwaju Amoda Yekini Ogunlere called Tinubu heightened the insults by referring to President Ebele imprudent choice of words in the West as slighting our parents. Of course, it is all politics. We just have to ask most Nigerians who is more of a rascal by reputation between Asiwaju Amoda Yekini Ogunlere and Ebele Jonathan. The crook of “international proportion” is the obvious winner.

Instead of turning this into ethnic bashing as usual, Nigerians have to be careful so that politicians do not play on our emotions for fun and power to loot the treasury. Some party members have been trying to milk blood out of this unfortunate choice of words by Ebele and the more he tries to get out of it, the more his opponents suck it to him. If the choice of words is going to determine this election, Asiwaju just goof big time also.

Lagos State may have benefited less than other states from the oil boon from the same Ijaw “drunk fisherman” ethnic group but that is not a reason to bash their son while complaining about someone bashing your parent. The last time we check, Asiwaju threw his parents from Iragbiji, Osun state under the bus. So Ebele could not even touch his parents and we did not feel he insulted our parents either.

Ebele has been going round the Country campaigning drawing attention of different ethnic groups to what he has in common with them. He made sure the Igbo understand his name is Azikiwe, that Hausa realized he was loyal to Yar’adua and that Yoruba know how much he admired the economic genius of Awolowo. No matter what he does, many of us are not so impressed with his PDP and their “nest of killers”.

However, the default party is not ACN led by one of the biggest rascals soiled by drug plea bargain in the United States but hailed and elected Governor in Lagos State of Nigeria. It is beyond imagination how anyone with that reputation can be elected as a dog catcher anywhere else. But then, and again, we are talking about Nigerian politics. So what do you expect, eh?

Boy, those Lagosians! This is the same rascal the people of Lagos allowed to field his wife Remi Tinubu for Senator Lagos Central, his daughter Sade Tinubu for Agege Lagos State House of Assembly, his son in-law Oyetude Ojo for House of Representative and Lola Akande, Remi’s senior sister for House of Assembly. This is what is called family plan, abi no be so?

Nigerians have to be careful and must watch out for those trying to use our ethnic base to divide us. Even worse is to personally insult the parents of an African. Ebele has never done that, it is a spin to get maximum political juice out. When people go to vote, let us hope they will do so from their head, not their feet.

Moreover, the Ijaw and the Yoruba are the sons and daughters of Adimu or Oduduwa so the Yoruba versus the Ijaw brawl that those uninformed have been trying to create will not work. Indeed, Nigerians are more related to one another than those they claim are their ancestors from outside Africa. So please chill!

If we are serious about changing Nigeria and we think only PDP and ACN can gather enough geographical spread across the Country to unite us, we need to take over both parties from cabals, drug dealers and “nest of killers” to make them useful to us. As long as both parties are led by these children of god, rather than calling them children of devils, we will keep on making the same mistakes expecting different results.

All parties and politicians must concentrate on what they can do for Nigeria, not how much they can loot out of it. It is not enough to get a university professor to carve out a mission or plan that nobody will look at once in power. Other professors, taxi and mule drivers must be able to discern it, appraise it and even tear it into pieces if it will not work. That is the way to hold them responsible once in power. Even military men know how to fool us with their initial mission statement. So watch out brothers and sisters!