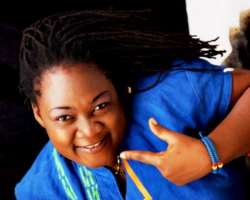 Comedienne Damilola Adekoya popularly known as Princess was this morning Monday, February 14, 2011 robbed by 10 armed men at about 6.30am at her Iwaya, Lagos home. The bandits allegedly made away with phones and other undisclosed valuables. No one was hurt. Princess says she was home with her friends, sister and niece at the time of the incident.

A shaken Princess who spoke to us on the phone disclosed that the robbers told her not to panic and promised they would not harm her. 'They were respectful, they said they like me and that they won't hurt me but I should give them their share of the Gulder Ultimate Search money', Princess says.

According to Ms. Adekoya, the gang apologized after they had stripped the household of tangibles.

Members of the Nigerian Police Force have since the unfortunate occurrence swung to action after visiting Princess' apartment upon receiving a distress call.