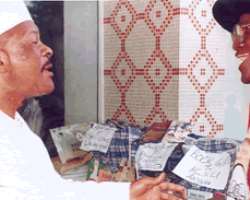 
In 1960, Government Secondary School, Okene, in present-day Kogi State recorded 100 per cent pass in the West African School Certificate Examination (WASCE). Out of the 21 students that sat for the exam, 18 had Division One while three came out with Division Two grades.

This feat was repeated in other years, especially in 1967, when the school made the highest number of Division One grades ever recorded in the annals of school history in the Northern region. Out of 56 candidates, 26 students came out in Division One, 13 in Division Two, while 13 others had Division Three. Only four students were referred. It was from this set of achievers that 15 professors in various disciplines later emerged, including Professor Timothy Asobele, the Acting Dean, School of Post Graduate Studies, University of Lagos.

Regrettably, this glory of academic excellence had since departed from the land. Today, the monster of failure has taken over the throne, unleashing its fury on students year after year. The harvest of academic failures has brought many students to their knees in tears. Every year, the nation is grieved by the below average performance of thousands of students in national examinations conducted by the West African Examinations Council (WAEC), the National Examinations Council (NECO) and the Joint Admissions and Matriculation Board, where only 20 per cent of the candidates pass.

The situation has become so bad that most students fear public examination bodies like a dreaded plague. For most students, the fear of WAEC is the beginning of wisdom. Statistics released by JAMB revealed that from 2007 to 2009, a total of 2,993,197 candidates sat for the University Matriculation Examination, but only 427,777 of them secured admission in universities nationwide.

Similar reports from WAEC indicate that the level of attainment of candidates in all papers over the years has been appalling. The result of 2010 November/December West African Senior School Certificate Examination didn't come as a surprise when only 20.04 per cent of 310,077 candidates obtained five credits in core subjects.

The distress caused by this situation led the Ministry of Education, Science and Technology, Kogi State to invite stakeholders in the education sector recently to a summit. In a letter addressed to key resource persons, R.K Oyebode, who signed on behalf of the state Commissioner for Education, described the mass failure in the area as an embarrassment to the state government.

'The general decay in the education system, resulting in the poor performance of Kogi State students in public examinations in recent times is regrettable and constitutes an embarrassment to Kogi State Government. This cannot be allowed to continue. At the instance of the Commissioner, Ministry of Education, the State Executive Council approved that a state education summit be convened, where prominent educationists and stakeholders in the state will converge to brainstorm and proffer solutions to stop this unacceptable situation.'

A similar action was taken by a motivational consultant firm, Standard Mandate International (SMI), led by Mr. Nelson Ayodele, who took the bull by the horn recently by organising the Students' Academic Success Summit at the main auditorium of the University of Lagos.

'Our main goal through this intervention is to drastically reduce the rate of failure in WASSCE, SSCE and UTME in our nation now and in the future by providing a regular platform for instructing final year students.' Ayodele said paucity of fund could not allow the organisation to extend the programme to other states of the federation and prayed for support from corporate bodies, institutions and the government.

The Head of National Office, WAEC, Dr. Iyi Uwadiae, in a goodwill message relayed by the Deputy Registrar/Controller, Science Department, Mrs Olayinka Ajibade, explained to the students that the exam body should not be seen as a public enemy because it does not deliberately fail candidates in their exams.

Addressing over 900 final year students drawn from 42 schools in Lagos and Ogun States, Ajibade in her paper titled, 'Poor performance in WASSCE: Perceived Causes Attributable to Candidates and Suggested Remedies', blamed the dismal performance in WASSCE on 21 causative factors.

While elaborating the student-related factors, she decried the poor reading culture among students in the country, which result in inadequate coverage of the syllabus and non-familiarity with test requirements.

'The reports highlight common pitfalls so that prospective candidates can avoid such. It is advisable to make use of them because smart persons learn from the mistakes of others,' she said.

Ajibade said good coverage of the syllabus should be achieved before the start of examination because the examination addresses a range of knowledge and skills that candidates must be able to demonstrate. Another contributing factor to the high failure rate, according to her, is the poor grasp of English Language as a medium of expression.

She warned students against the use of SMS or e-mail parlance in examination.

'From an early point in your course, endeavour to build a level of vocabulary appropriate for your level because clarity of expression is crucial to success,' she advised. The WAEC official decried the problem of unidentified scripts, as some candidates forget to write their names and examination number. She frowned at such oversight and warned candidates to resist the pride of leaving the hall early in an attempt to impress their colleagues.

She also warned against infringement of examination rules as strict punishment would be meted out to culprits. 'Examination malpractice demonstrates lack of integrity and should be shunned as it does not lead to lasting success,' she advised. Also speaking, the representative of the Joint Admission and Matriculation Board (JAMB), Mrs Aisha Dahiru, said less than 20 per cent of candidates that wrote the Unified Tertiary Matriculation Examination (UTME) get admitted into Nigerian universities.

She also attributed the general poor performance to foundation factors, citing problems associated with the students' basic education, the formative years and secondary schools. Dahiru also blamed teachers saying, '…It is no secret that the quality of teachers affects the performance of a student in an examination. Unfortunately, the good schools, which are usually privately-owned, charge exorbitant fees which only the rich can afford.'

The JAMB official warned candidates against wrong subject combination, poor shading of the script and errors associated with online registration. She said the attitude of some parents that force careers on their children could also lead to failure.

In his paper at the summit, the Acting Dean, School of Postgraduate Studies, University of Lagos, Professor Asobele declared war against ignorance, as he described Nigeria as the biggest book market in Africa.

In his paper titled, 'The Politics of Knowledge: The Debate on the Place of Books, he stressed the need to revive reading culture and called on the Kogi State government to subsidize book production meant for children and youths.

'Kogi State should create an enabling environment to encourage reading in all types and at all levels of society. By this I mean the illiterates should be given adult education lessons in the library stock with adult education books in order to help foster in them the right reading habit.

'All-round education should be the goal and not an education aimed at passing NECO, WASSCE, SSCE, but for the total development of an individual', he said.

Professor Asobele also recommended a legislation for the provision of well-equipped libraries in the state.

Asobele, an author of over 60 books, also tasked the government on provision of school blocks, furniture for school libraries, and enhanced inputs in the form of books, science equipment and other teaching aids. He said providing teachers with basic facilities would help upgrade their competencies and skills for better performance.