TALENT IN NIGERIA IS GREATER THAN IN AMERICA 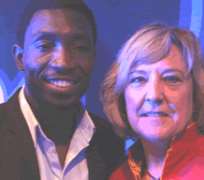 Lillias Bode with Timi Dakolo
For the on-going entertainment show on Nigerian Television stations, there is no doubt that raw talents will be smoked out of their obscurity from the remotest and tiniest villages. They will be sieved, refined, fine-tuned until they are made stars, and super-stars and their sonorous voices will one day, rule the world.

While these prospective award winning artistes are passing through the mills in the Ojodu, Ikeja-based Nigerian Idol studios, the only visible faces that are most commonly seen are those of the judges on the prime-time show while there are many other people who also see to the success of this show

Lillias Bode is one of those unseen faces. Although, she remains unseen, her voice is as important as some of the faces whose sense of judgement make or mar the contestants. Lillias, from South Africa is one of the technical minds behind the show. She is the series producer of the Nigerian Idol show.

Her romance with film and television started 30 years ago as a continuity girl. She progressed to production manager, and was a film editor at the South African Broadcast Corporation for about four years until she joined Peter Bode as a film editor and producer at Peter Bode Productions. Since 1997 she has been freelancing mainly associated with Videovision Entertainment as a Line producer and supervising producer on many of their television productions.

Recently, Woman of the Sun sought out Lillias Bode at their studios where she talked about the Nigerian Idol show and also bared her mind on her impression about Nigeria.

Here are excerpts:
Can you give me a sense of your background?
After graduating with a theatre arts degree I worked for several years in the South African feature film industry before joining the national television broadcaster as a film editor. I soon left and formed a production company with my future husband called Peter Bode Productions. We have been working together in the television industry ever since and have been lucky to have worked on most of the big television shows in South Africa

From what you have seen so far, what can you say about the Nigerian talents?

The Nigerian singing talent is without doubt amongst the highest in the world. I am sure any one of our top 10 in this season of Idols would comfortably have won the last South Africa Idol.

Would you say that you got the best people for the contest?

There are always people who are really good who slip through the cracks, but by and large we ended up with a really outstanding group of singers

From the 500 contestants you got from the different regions, do you think that luck has any role in the case of the final 10 contestants?

Yes, I do think that lady luck plays a part in any competition

Do you think that all the contestants, both those who win and the ones who pulled out on the way, have musical career after wards?

This is so dependant on the personality, drive and determination of each individual. We have seen internationally that the winners often fade away and those who came 2nd or 3rd do even better

From previous records, winners of such shows do not always end up taking music as their careers.

What do you make of that?
Again, I think it has to do with the committment of the winner. Everyone who enters these competitions thinks they will make a career of music if they win but thatâ€ is often not the case. Winning Idols is only the first step – the rest of the journey, up the ladder is up to each person's own will and determination

Do you also not think that while screening the contestants that the best might have been lost while you were trimming down the number?

It is possible, but so much care went into the selection that it is unlikely. It is also very dependant on the taste of the judges and obviously some people got 2 or 3 no's and did not make it through, but you or I may not have agreed with them

As a producer, what would you say are the major challenges in terms of infrastructure in putting up this show?

The most difficult thing about working in the Nigerian television industry is the scarcity of skills. The crews that we work with are all highly motivated and enthusiastic, but because the industry is so small there are not enough of them to go around. Specialised skills like set painting, video wall operators and count down production sectretary's are very scarce and inexperienced.

How would you compare the discovery of talents in the American version of the show with what you have seen in Nigeria?

Having been to Nigeria for about two years now, what interests you most about the Nigerian people and how do you feel being here?

WhatI love especially about Nigeria is the people. They are warm, welcoming, friendly, clever and what is so encouraging and heartwarming….. they want to learn, they get involved and listen with burning enthusiasm

What is your impression about Nigeria?
Nigeria is an irresistable country to live in – the pace is frenetic and the energy contagious. I think it is Africa best. If we could just get stable power and get rid of corruption I believe Nigeria will soar.

What Nigerian food do you like most?
I am addicted to jollof rice and yam chips! But I regret to say, all other Nigerian foods are very different and foreign to anybody who grew up outside of Nigeria.

You took up a Yoruba name, Bode, what influenced your choice of the name and in what circumstance did you adopt the name?

To be honest my name is not Yoruba – it is my husband's surname and is of German origin! But we have now adopted it as a full Yoruba name and we delight in saying we are Nigerian because of our name! We consider ourselves very lucky.

Would you like to marry a Nigerian if you have not been married?

Definitely! I think Nigerian men are the sexiest in the world! Should I add…..In case he is listening …..after my husband.