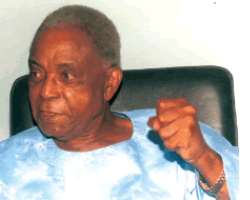 A former Minister of State for Defence, Mike Oziegbe Onolememen, has urged the Federal Government to immortalize foremost nationalist, Pa Anthony Enahoro, by upgrading the Federal Technical College in Uromi, Edo State, to a University of Science and Technology and rename it 'Anthony Enahoro University of Science and Technology.'

Enahoro, who passed on in December 2010, was among the first generation of Nigerian politicians that fought for the country's independence from Britain. The ex-Minister, who spoke in Abuja, said immortalizing Enahoro would be an honour for the sacrifice the late nationalist and politician made for the nation.

'A lot has been said of the patriotic and pivotal role played by Chief Anthony Enahoro in freeing Nigerians from the shackles of British colonialism - a fight he started at the young age of 21as the youngest editor ever of a major national newspaper in Nigeria.

?'Beyond moving the very first motion for the independence of Nigeria in 1953, at a time many of his peers in parliament lacked the courage to challenge colonial rule, Enahoro played more strategic roles in the shaping of modern Nigeria.

'First, as the Chief Federal Negotiator and official mouth-piece of the Federal Government when he served as Federal Commissioner of Information and Labour during the Biafra /Nigeria Civil War, Enahoro helped to steer the negotiations in favour of a united and indivisible Nigeria, through his unparalleled skills, oratory and diplomacy. This was attested to last week by Gen. Yakubu Gowon, then Head of State, at the tribute session in Benin-City, as part of his funeral activities organized by the Edo State Government.