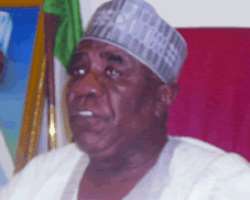 Senate Majority Whip, Mahmud Kanti-Bello, has called for the resignation of the Chief Justice of Nigeria, Justice Alloysius Katsina-Alu, and the Court of Appeal President, Justice Isa Ayo Salami, for dragging the image of the judiciary in the mud.

Kanti-Bello said the quarrel between the two top officers has dragged the revered image of the judiciary in the mud and urged them to throw in the towel. But both Senators Joseph Waku and Rufai Hanga disagreed with Kanti-Bello, saying that rather than resign, Justice Ayo Salami should be praised for standing on the side of truth.

Kanti-Bello, who saw the open altercation as a disgrace to the judiciary and a danger for the nation's democracy, noted: 'what they are doing is a total disgrace to the nation. The judiciary is supposed to be the last hope for the layman. That is where we run to for assistance when we are wronged. But if the judiciary itself cannot help itself, then all hope is lost. It is the first time that we are seeing a ranking member of the judiciary coming out openly to talk and make so weighty an allegation.

'What this portends is that there is a deep rot in that system and the sooner we clear the mess the better for this country. To me as a person, they should both resign and allow us to clear the mess in that sector,' the fiery senator said.

But Waku said, 'The manner the President of the Court of Appeal handled it endeared him to me. He is a hero and with people like him on the bench, we can say there is still hope for this country. Katsina-Alu is the President of the judiciary and Salami is the deputy and for the deputy to refuse to accept the request of his boss is a good thing and I congratulate him for that. 'He should be one of the few heroes we should point to. Of course, you remember how the case he mentioned went. How it was the Supreme Court that eventually decided a case that should ordinarily be decided by the Appeal Court.

'What happened between the two of them is good for our democracy. At least, we now know that the PDP plans to rig the April polls and ensure that the rigging is not upturned at the courts as we saw in some instances before. It is a shame that the CJN is playing the PDP script. The PDP realized that the rigging they did in 2007 was exposed at the Appeal Court so they plan to rig in that place too and the CJN, who must be taking instructions from the President, is trying to carry out such plans. It is a shame,' the Benue senator said.

Former Chairman of the Congress of Progressive Change (CPC), Senator Hanga, also rejected claims that the two judicial officers should resign. He asked, 'Who should go? Is it the man that blew the whistle, in this case, Justice Salami, or the CJN? Justice Salami has not committed any offence. I think it is an eye-opener for Nigerians about what is about to happen in April.