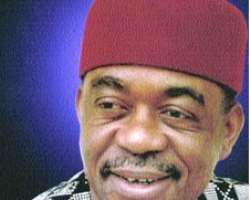 
Despite the court orders restraining the Independent National Electoral Commission (INEC) from accepting and listing the names of embattled Abia State governor, Chief Theodore Orji and his Enugu State counterpart, Mr. Sullivan Chime as candidates in the April governorship election, the Peoples Democratic Party (PDP) yesterday handed over the party's flags to them.

Before the scheduled flag-off of the Jonathan-Sambo campaign in the South-East yesterday, there was tension as the party had been stopped by high courts in Abuja, which restrained the PDP from submitting names of Orji and Chime to the Independent National Electoral Commission (INEC) as its candidates in the April polls.

But at exactly 3:28p.m yesterday, the PDP acting national Chairman, Alhaji Bello Mohammed, at the rally held at the Nnamdi Azikiwe Stadium, in Enugu, called up Orji and handed him the PDP flag, urging him to lead other candidates in Abia to victory at the polls.

After Orji, Governor Martin Elechi received his own flag at 3:30p.m followed by Chime, who got his at 3:33p.m and lastly Governor Ikedi Ohakim of Imo State by 3:37p.m.

However, the duo of Orji and Chime are expected to return to the court next week, where Chief Ikechi Emenike and Chief Anayo Onwuegbu are respectively claiming to be the recognised candidates of the party in Abia and Enugu states.

The duo of Eminike and Onwuegbu were, however, absent from the rally that saw in attendance President Goodluck Jonathan and his deputy, Namadi Sambo and an avalanche of PDP stalwarts from across the country.

Speaking to the large crowd at the stadium, President Jonathan promised the Igbo that he would see that kidnapping, which has become rampant in the region, was stamped out even as he would set machinery in motion to ensure that facilities that would enhance the enterprising spirit of the Igbo are put in place.

He reminded them that his administration decided to upgrade the Enugu airport to international status to ensure that cargoes from Igbo business men and women arrive very close to them.

Similarly, he said they are in the upbeat in the dredging of the River Niger, just as a dry port would be built in Aba for easy access to Igbo traders.

Jonathan also promised that the completion of the Second Niger Bridge would be of utmost priority to his administration if they return in the second dispensation.

He saluted the entrepreneurial skill of the Igbo, thanking them for taking him as one of their own.

Though he said they had not come to campaign, he urged the Igbo to vote for him in the April 9 polls, saying that he believed in the Igbo as they always keep to their promises.

According to him, the coming out of all the traditional rulers from the various states of the region to welcome him, which was the first of its kind since he started his campaign, was a clear signal of his acceptance in the region.

In his welcome address, Governor Chime told Jonathan that he had not come to Enugu to campaign, but to identify with his people who are committed to returning him in the April polls.

He advised Jonathan to go to sleep and never bother to come back campaigning in the region, as the governors of the states and their people are on top of the situation and would surely deliver the party at the polls.

Also, former vice president, Dr Alex Ekwueme, toed the line of Chime, as he assured the president of the support of the zone.

Ekwueme pointed out that the PDP got landslide victory in 1999 in the zone, advising that what was left out now for the party in achieving the same feat was for the leadership to align and reach an accord.

Also Governor Peter Obi of Anambra State, whose party, the All Progressives Grand Alliance (APGA), held its national convention the previous day in Anambra State, where they adopted Jonathan as their presidential candidate, tried to explain why they took that decision.

Obi, who spoke in Igbo said he and the national leader of the party, Dim Chukwuemeka Odumegwu Ojukwu as well as APGA factional chairman, Chief Victor Umeh, agreed to do so.

Besides, he said that the South-East governors had agreed to support Jonathan, just as they vowed that none of them would vie for the positions of president or vice.