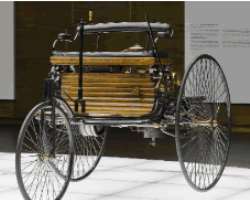 International guests from the automotive industry and the fields of politics, business, sports, society and the media, as well as members of Daimler's Board of Management, Supervisory Board and Executive Managers from all over the world, were in the same happy mood as Daimler AG celebrated exactly 125 years after Carl Benz registered his 'vehicle with gas-engine drive' under patent number 37435 with the Berlin Patent Office in 1886.

Approximately 1,400 guests were hosted by the inventor of the automobile at the Mercedes-Benz World in Stuttgart. The evening was moderated by DesirÃ©e Nosbusch with guests of honour including the German Chancellor, Dr. Angela Merkel, and the Prime Minister of the Federal State of Baden-WÃ¼rttemberg, Stefan Mappus. In attendance included, renowned Mercedes-Benz formular one record title winner, Michael Schumacher, Nico Rosberg and Franz Beckenbauer - German football coach, manager, and former player.

'In January, we celebrated a significant milestone by marking 125 years since the original patent application was filed by Mercedes-Benz founding father. This ultimately layed the foundation for all present-day Mercedes-Benz Vehicles,' said Mirko Plath, Managing Director, Weststar Associates Limited, Authorised General Distributor of Mercedes-Benz in Nigeria. 'As the inventor of the automobile, Mercedes-Benz innovations have continued to set the benchmark in the automotive sector.

'This year, we will be laying significant milestones especially with the relocation of our offices and the grand opening of a state of the art Mercedes-Benz centre by one of our accredited dealers in Lagos. Our historic commitment to always offer customers the absolute best, combined with our collective ambition to lead the industry, are proud components of our heritage that will continue to remain key factors for future growth as we invest in research and development to constantly 'reinvent' the automobile.'

When Carl Benz registered his Patent number 37435 in Berlin on January 29, 1886, nobody could possibly have imagined the triumphant march the modern motor car would embark upon over the following 125 years. Less than 100 kilometres away and almost at the same time, Swabian inventor and entrepreneur Gottlieb Daimler was working on his motor wagon, to which he gave the finishing touches that very year. However, both had to wait some years before the groundbreaking development they had succeeded in initiating became a profitable commercial proposition.

Dr. Dieter Zetsche, Chairman of the Board of Management of Daimler AG and Head of Mercedes-Benz, emphasized the importance of the automobile: 'The invention of Daimler and Benz has changed the world for the better - and it will continue to do so. History shows that when a society becomes physically mobile it also becomes socially mobile and economically successful. As the inventor of the automobile, Daimler strives to be at the forefront of shaping future mobility.'

After 65 years of post-war production, the Mercedes-Benz brand has reached a new milestone. 30 million automobiles with the three-pointed star have been delivered to customers since 1945. This unit-sale according to Dr. Dieter Zetsche is another major milestone in the history of the Mercedes-Benz brand demonstrating the popularity our cars have enjoyed for many decades with customers around the world.