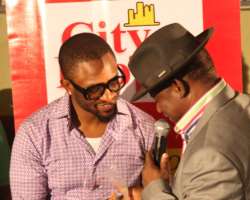 It was fun, excitement, banters and all at the star studded reception for Darey last Sunday

On Sunday, February 6, 2011 not only did R&B King Darey Art Alade spend his evening hobnobbing with colleagues, Journalists, Radio DJs and industry top shots, he was also the centre of attraction as City people hosted him to a grand reception in honour of his outstanding achievements in the Nigerian music industry. “He was decorated with an award as “The King of R&B” in Nigeria.

The event was hosted by a team of comperes, including Tosyn Bucknor, Tee A, Ali Baba and Gbenga Adeyinka, who drilled and thrilled guests; taking them through series of jokes and comic sketches. Waje was the only artiste that performed at the event!

In view of this Bisi Olatilo presented a glass crystal plague to honor Darey on behalf of City people Darey in turn thanked everybody for honouring him.