JOS, THE ROAD TO MOGADISHU -WHAT NO ONE WANTS TO SAY 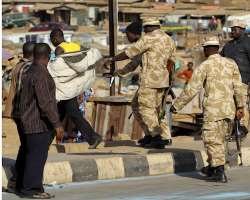 I have watched, read and listened; it’s been one news report after the other, commentary-by-commentary, grief, pain, sorrow, and trading of blames. The causalities have been on the increase, it’s close to averaging two dead per day, depending on whose figures we are relying on.

However the issues still remain virtually the same, very little is known about the true causes of the Jos killings. But a fact remains that we are on our way to Mogadishu...one brutal step at a time.

In Jos, Plateau state, it has gone all so sour, we all talk about peace, without realizing the amount of hate in the open market all free for grasp. Everybody has his/her version based on religion, ethnic cleavages, and economic leverage.

In Jos, Plateau today, no one has opened up to say, how we got to this point...Where children and women are butchered with savagery irrespective of faith and creed, where family breadwinners and bakeries are hacked down in their prime.

We have closed our eyes, ears and noses, lost our consciences, as we have become victims of our own self-inflicted docility. In parts of Jos, local youths now kill and eat those they perceive to be enemies...The Newspapers did not tell you this, neither did anyone tell you that in Jos today, there is an average of one gun for every ten houses, unlicensed arms and ammunition.

I am sure most Nigerians in other parts are unaware that we have gotten to the level where we get text messages such as "This is from a reliable source, please do not buy apples or suya from them, they have poisoned it...bla bla bla".

I am sure many Nigerians on facebook, tweeter, various social network groups and list serves do not know that we have redefined terms that are part of our conflictology...There is the 'them, us, they, namu, nasu, harane, dan kasa, jarawa, and all sorts'.

It all depends on which parts you belong to...Beroms Vs Fulanis, Hausas vs natives, Hausas vs Igbos, as these was being penned it was vs students. Landowners vs settlers, the dominant vs the domineering, the rich vs the poor, the state government vs the special task force, women vs army, it’s just endless

How could I forget, some people vs Jang, there are also those who believe that the only solution is a state of emergency. It all depends on where you stand, how it affects you and how much you care.

My next office neighbour has not been seen for three weeks...Peter Nnoli another close associate was identified by his wedding band and chaplet. He was killed and burnt! Another friend Suleiman was burnt, he was on his way to Yola, interestingly sad he was actually Christian, he was not given opportunity to state his tribe, religion or anything.

How did we get to where we are in Jos and its environs? When did we descend to a state where we in Jos have to be careful of the kinds of clothes we wear, you dare not wear a kaftan if you are not Muslim, and trust me it’s no use wearing a jeans and shirt looking like James Chuwang in an environ where you should ordinarily be Aminu Mohammed.

I am sure no one told you in Jos that we have neutral points where business persons meet. If I owe you and I reside in Angwar Rogo and you in Tudun Wada, we arrange for a neutral place to meet.

Did you know that motorbikes have their operational zones, that you do not dare enter a vehicle without making sure the composition of the passengers?

That no matter the situation peradventure you are Muslim, you dare not by mistake, error or omission hit a Christian on the road, even if the accident was his fault and that the city centre is on self-imposed curfew, with citizenry all home and in their comfort zones between 5 and 6pm.

That today most persons would rather an Abuja plate number for between 30 and 40 thousand Naira, than a Plateau driving plate number that is barely 15 thousand.

Banks only work till 2pm and that’s depending on the day, and Saturday banking is just off the radar for now.

Most of us, or put rather politely some of sit in comfort zones and watch as women attack soldiers, burn their camps and we look for justification forgetting that in the real sense these are acts of treasonable felony.

Some say Jang is the problem, others say it’s his enemies, Beroms are killed by the dozens almost weekly in their local villages, settlers, indigenes, Christians, Muslims and pagans are slaughtered, hacked down and accidentally discharged by fellow Nigerians in uniform and without uniforms in the city and environs.

No sane person is going to fill University of Jos as a school in the next JAMB admissions. The School has almost a dozen and more of its students still in hospital as a result of varying degrees of gunshot wounds and cuts in two days of protestations, arson, attacks and violence.

No one is being held responsible. There is a threateningly alarming increasing level and doze of distrust. The governor has completely failed, not as a multiple result of his but a function of a complete failure of the entire security network and leadership apparatus, from Jonathan to Jang.

In Plateau, The Special Task Force reports to the Defence Headquarters, the Commissioner of Police reports to Abuja, and Jang sits in Jos, he cannot even pay workers as he battles saboteurs from his own backyard and contends with his self-denial that he is in charge.

Respected senior citizens like Gowon are more concerned praying for Nigeria, and travelling to find peace in Ivory Coast than Jos...Yahaya Kwande is with Atiku, when not filling court cases, he is granting interviews on zoning. Solomon is tired, preferring to shuttle Abuja to ease tension and help himself to transport fare as a Northern Elder in support of Jonathan.

The likes of Useni out of boredom is aiming for the Senate, Domkat Bali is content fighting court cases to remain Ponzhi Tarok.

It’s more of Jang's problem than a collective problem of a people, off course he is the governor. The Fulanis are aggrieved, rightly so too, the Igbos are weighing the option of retaliatory actions, with right to do so. Yorubas are caught in-between with its Christian and Muslim population. Indigenous persons are tired and believe that the answer is wholesale, pursuing of all strangers, which is not a bad idea too, so let’s see how it plays out.

I once said when this year’s killings commenced that the Jos massacres represent a failure in all ramifications on the part of those that have been vested with authority whether by votes or rigging, from Jonathan as C-in-C to Jang, religious, civil, opinion, and traditional leaders.

But as a people we are all even more concerned about Tunisia and Egypt, forgetting that even these places have a far more enhanced level of comfort than our backyard here. Yet these places are feeling the heat. So we have failed, we just have failed to live as brothers and sisters because ‘maybe’ we are not?

Civil wars or uprisings only need a conflagration point to explode. People live their lives in fear; neighbourhoods are raising militias groups in the guise of neighbourhood watch. We are breeding a disaster.

Better a bomb, than pathways riddled with landmines. We see it as it’s become in Borno, Bauchi...I could go on and on. But what is there to say, to families that have suffered looses in these senseless killings, how do we explain to the orphans, are we sure we discern the magnitude of socio-psycho economic damage we planting?

God save Nigeria, but Nigerians need to save themselves. Do we really desire peace, or we continue till the last man standing.