UNION BANK AND ITS LABOUR MANAGEMENT 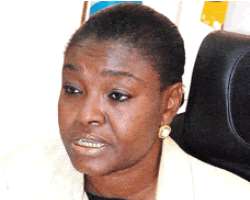 Mrs. Funke Osibodu
The appointment of Mrs. Funke Osibodu as Group Managing Director and Chief Executive of Union Bank Plc almost two years ago, was no doubt, a great victory for the Nigerian womenfolk.

The regulatory and supervisory authorities must have reposed unflinching confidence in her, so much so that they did not have any doubt whatsoever in bestowing this colossus, called 'Union Bank Plc' on the shoulders of a woman, who must have been perceived as an Amazon of sort.

I averred that the two women among the CEOs appointed to oversee the eight CBN-acquired banks must have practically demonstrated excellence to warrant the authorities to single them out as primum inter peres.

From the inception of her appointment, Mrs. Osibodu was perceived as a business-minded individual who, in spite of all odds, was set to turn-around the beleaguered bank.  But recent happenings seem to cast doubt in many, who now strongly feel that she may not be mindful of the implications of her decisions and actions in the running of the bank.

The raging battle between the management of the bank under her headship and the two domestic labour unions is a pointer to buttress this assertion.  Unequivocally, there seems to be absolute misconception of the principle of social partnership in labour-management relations in Union Bank Plc.

I am particularly disturbed at the lingering imbroglio that led to the termination of the appointments of 13 senior and middle level employees of the bank for, 'not reneging the participation in union activities.' According to report, a circular was on January 13, 2011, issued directing that the senior and the junior unions in the bank should cease to exist forthwith because they were engaging in 'unlawful operations.' However, what constitutes 'unlawful operations' was not stated.

One is deeply concerned about the industrial relations implications of the whole scenario.  It is not an uncommon phenomenon to witness industrial disputes of this nature, but what is intriguing in this case is the dimension of abolishing unionism of the employees.  Curious! One may exclaim.

Perhaps, the management of the Union Bank Plc - an old generation bank for that matter – should be reminded of the entrenchment of the right to peaceful assembly and association in our Constitution.  Thus, Section 40 of the nation's Law Book elucidates that 'Every person shall be entitled to assemble freely and associate with other persons, and in particular he may form or belong to any political party, trade union or any other association for the protection of his interest.'  In fact, it has become pertinent to ask whether an employer has the power and the right to order the cessation of unionism in a unionized organization, without genuine reasons.  The reasons being adduced here are not weighty enough to warrant the injustice being meted out to these THIRTEEN.

For the avoidance of doubt, it is the Registrar of Trade Unions under the Federal Ministry of Labour and Productivity, who is bestowed with the statutory power to register or de-register trade unions in accordance with the Trade Unions Act.  For the management of Union Bank Plc under Mrs. Osibodu to arrogate to itself this power is a total departure from the Nigerian industrial relations' norm.

It is absolutely unlawful to punish a worker for no other reason than participation in labour related activities.

For purpose of clarity it is undemocratic, unacceptable under the law, and to say the least absolutely antediluvian for a foremost Nigerian bank run by supposedly patriotic Nigerians to tread the path of backwardness in our march from obscurity to light.  In this current dispensation where every effort is being made to re-write our history and unite our great nation, permit me to say that the enthronement of industrial democracy, as against anti-labour and all forms of repressive tendencies should rather be encouraged.

Union Bank Plc is a bank that has come a long way and cannot be said to have a dearth of the right caliber personnel who are qualified and experienced, especially in the area of labour management relations, to guide management in decision-making. Two things are perceived here: the management is either being misadvised or averse to good advice and opts to remain unnecessarily obstinate.

The beauty of  the Nigeria's industrial relations policy is the institution of voluntarism with limited interventionist approach. Here, the state does not hurriedly apply a sledge hammer to quell industrial crisis where one is perceived. The labour and the employer are allowed ample opportunity to settle the disputes in accordance with the laid down procedure.  Section 3 (1) of the Trade Disputes Act (as amended) is not shrouded in secrecy.  If this is not feasible, parties should endeavour to enlist the services of a Mediator as statutorily provided.  Either party may take up the matter with the Minister of Labour where the Mediator is unable to achieve settlement.

Union Bank Plc should note that the interest of the Nigerian banking public is at stake.  Depositors are kept in suspense and the Nigerian economy may be in jeopardy if urgent steps are not taken to reverse the ugly trend that may trigger off conflagration of uncontrollable dimension.  Nigeria cannot afford bank liquidation and its unpalatable consequences at this time.

Both management and the labour unions should in the interest of industrial harmony sheath their swords and come to the negotiation table.  If for no other reason, let them remember that they have a mandate from the Central Bank of Nigeria (CBN), to revive the ailing bank.  Furthermore, to save this bank from imminent failure, the Minister of Labour and Productivity should, in accordance with the power vested in him, intervene by referring the warring parties to either Conciliation or the National Industrial Court.

The CBN has contributed immensely in salvaging the image of the banking industry. It will therefore, be unpatriotic of any individual or group to frustrate that noble effort.