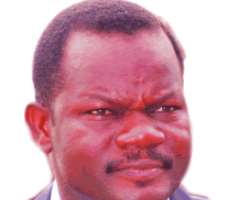 Dr Ade Dosunmu, Peoples Democratic Party (PDP) governorship candidate in Lagos is confronted with a legal hurdle in his quest to contest next April's governorship seat. But the party leadership says no cause for alarm.NDUBUISI ORJI reports

Thursday, February 03, 2011
•Dosunmu
The Lagos State chapter of the PDP and its governorship candidate in the April governorship election is facing  a very big challenge. That is how to get the party members across the state to accept the candidature of Dosunmu as the party's flag bearer in the April polls even if grudgingly.

Indications that the emergence of the former Nigeria Maritime and Safety Agency  (NIMASA) boss as the governorship candidate of the PDP had not gone down well with every interest group in the party emerged recently when a member of the party went to court to challenge Dosunmu's candidacy.

The member, Mr. Oluowo Adeyeri, a delegate from ward A2 Ikorodu in the just concluded state congress of the party where the governorship candidate emerged wants the emergence of Dosunmu as PDP flag bearer nullified. In his suit before a Federal High Court sitting in Lagos that the former NIMASA boss was not qualified to participate in the governorship  primary that produced him.

According to the plaintiff, the governorship candidate had not spent two years as a card carrying member of the party prior to January 9, 2011 when he emerged as  the party's candidate.

He said that as at January 2009, Dosunmu was still a public officer and as such precluded from being  a member of a political party. He said in the absence of  a waiver from the party's leadership,   Dosunmu shouldn't have been allowed to participate in the gubernatorial primaries. The PDP constitution requires party members who have not spent up to two years in the party to get a waiver before standing as the party's candidate in an election.

Besides, the party stalwart said Dosunmu was forcefully removed from office as DG, NIMASA. And that he has a case to answer before the Economic & Financial Crime Commission(EFCC).

The litigant is praying the court to disqualify Dosunmu as the PDP  governorship candidate in Lagos and declare the aspirant with the second highest votes in the primaries as the duly elected candidate of the party in the state.

Dosunmu it would be recalled polled 431 votes to defeat six others in the Lagos State PDP governorship primaries. While Tokunbo Kamson, former Minsiter of State for Defence, Demola Seriki and former Lagos State deputy governor, Femi Pedro scored 182,120 and 108 votes respectively. The other aspirants-Owolabi Silas,Qudus Folami and Babatunde Gbademosi closed the rear with 14,8 and 5 votes each.

In a reaction to the legal suit, the former NIMISA boss  said it is a non issue. One of his aides, Mr Dare Atoye said the litigation smacks of mischief. He told Daily Sun that if his boss had problem with the Economic and Financial Crimes Commission(EFCC) he would have long been arrested to answer to corrupt charges. For him, the EFCC angle is just diversionary.  ' You are a journalist. You can find out for yourself the truth about the EFCC issue. If he (Dosunmu ) had any issue of corruption, the EFCC would have charged him to court. He has no case to answer .The EFCC is just a distraction,'  he reiterated.

On the issue of not getting a waiver, Atoye said those accusing the PDP governorship candidate of not having spent two years in the party or getting a waiver before presenting himself for an elective office are not conversant with the truth about when he joined the PDP. He said they forgot that the office of the Director General, NIMASA is a political appointment, which does not preclude the occupant from being a member of apolitical party.' DG, NIMASA is a political appointment and the occupant of the office can be a politician,' he added.

The state secretary of the party, Mr Olatunji Shelle concurs. He dismisses the suit as frivolous. However, he said it is just a ploy to scuttle the plans of the PDP to win the state in the April elections.

The party scribe told Daily Sun in a telephone interview that Dosunmu has no case to answer on the suit against him. According to him, he was screened and cleared by the State Security Service(SSS) and all the necessary governmental agencies before he was cleared to participate in the primary  election by the PDP Governorship Screening Committee for the South-West.

However, he said the party knows those behind the suit and would deal with them accordingly at the end of  the day. When prodded further, he responded thus: 'I can understand where (the litigant) is coming from. He must be working for somebody against the party. Our candidate is a candidate to beat. Our candidate got all the necessary clearance from the SSS(State Security Service), and all the relevant agencies before he was screened by the party's Governorship Screening Committee for the South-West.

Only for somebody to come from nowhere to go to court to challenge it; but that will not distract us.'

Without mentioning names, Shelle laid the blame   for the litigation at the door steps of one of the governorship aspirants in the just concluded party congress. He said 'there is a particular aspirant that lost; our candidate came first, that aspirant came second.'

In his view, it is that aspirant that has gone to court by proxy to cause problems for the party. He said the party would take a dispassionate look at the matter, once the case is disposed off and sanction that aspirant accordingly for trying to rock the boat.  'we shall discipline that aspirant as soon as the case is over', the party scribe enthused. He expressed hope that the ligation would not affect the party's plan to achieve full reconciliation within its fold.

According to him, so far the party has been able to unite all its feuding members preparatory to the next election.  Kamson ,the man to whom all accusing finger is pointing to, said he has nothing to do with the suit against the party candidate.  Kamson said there is no basis for anyone to insinuate that he is behind the court suit against his party and its governorship candidate in the next election.

According to him, the party stalwart who went to court is praying the court to declare the second aspirant with the largest number of votes cast as the winner of the primary, and that incidentally happens to be him. In his words 'it (suit)is not asking me per say to be declared the candidate. It is  asking that the next aspirant with the highest number of votes should be declared the party's candidate, and that happens to be me. People are just misconstruing it.'

He contended vehemently that the fact that he came second and is the only main contender from Ikorodu does not mean , he is the person behind the suit. ' I am not the one who sponsored that litigation. The person happen to come from Ikorodu. I am from Ikorodu too. I am not against the man, who went to court because it is his fundamental right.

Some people elected him as a delegate. So, he has a right to challenge the outcome of the congress. But I am not the one sponsoring him,'Kamson explained.

In the next couple of days, the legal works in respect to the suit  will begin in the courts. For Dosunmu, it would be a big challenge managing his campaign, alongside a legal suit. But for the PDP winning the suit itself is a  serious issue. The suit has sown a fresh seed of mistrust  in the party.  And for a party that needs all hands on deck to win the next election, that is a serious matter.