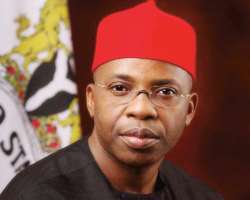 
There is no doubt that the Governor Ikedi Ohakim administration has rebranded Imo State in Nigeria as it has also radically changed the derogatory profile of Owerri as a jungle city for good. That Owerri the capital of Imo State is a beautiful city is being reinforced not by rhetoric but with noticeable developmental and infrastructural renewal projects that has won applause from Nigerians. But Imo State Governor, Ikedi Ohakim has never enjoyed a sustained period of peace. He is besieged by a coterie of political opponents who are united by one consuming passion-removal of Ohakim by every means necessary. Ever since he emerged the Governor of Imo State in 2007,Ohakim has had to battle all manner of political opponents including 18 court cases challenging his election and one by one, Ohakim has emerged victorious in all the cases. But just when he thought he had dealt a final blow to the opposition, another foe would emerge with greater determination to crush him.

It is not unexpected that opposition will attempt to rubbish a good administration's legacy as it is always the case in Nigeria, what is however missing in Imo State is a well articulated view point from the opposition on how to develop Imo State. In Imo State, since 2007, the only weapon of war that politicians use all the time against Ohakim is character assassination, which is the spread of false allegations against a candidate. Character assassination is an attempt to tarnish a person's reputation so as to bring him down. It involves exaggeration or manipulation of facts to present an untrue picture of the targeted person. It is a form of defamation. For living individuals targeted by character assassination, this is so as to result in the individual being rejected by his community, family, or members of his or her living or work environment. In practice, character assassination involve double speak, spreading of rumours, innuendo or deliberate misinformation on topics relating to the subject's morals, integrity, and reputation.

Instead of pointing out better ways to run Imo State, politicians that want to unseat Ohakim resort to misinformation, disinformation, propaganda and name calling so as to deceive the people. To these character assassins, every woe that befalls anybody in Imo State is put on Ohakim. These warp-thinking propagandists are also swift in making wrong and unjust judgement against Ohakim. I had the opportunity to read an article attributed to an uncertain Don Azuka Onwu and published in some online media houses under the caption, EFCC Executive Chairman, Farida Waziri, a good friend of Ikedi Ohakim during his 419 years. If you have gone through that article, you can see just how ridiculous some people can be. Essentially, no one can deny others from making out their opinions about whomever they dislike, after all, the world is made up of friends and enemies. But opinions, in my view, should be constructive, devoid of imaginary negative perception and should wear human face.

In his article, Don Azuka Onwu, or whatever is his real name, claimed to be a boy that worked in an imaginary 419 office of Kingsley Ibe and Ikedi Ohakim at Ajao Estate behind Stop Over Motel along the International Airport road Ikeja. He also alleged that during Ikedi Ohakim's 419 period, his associates were Tony Chukwu, late Zeb Phillips, Eze Cletus Illomuanya (Now a traditional ruler) Chief Reginald Amadi, Orji Uzor Kalu (With SLOK office in Calcutta Crescent Apapa), Ezego, Ode Njiji of Njima Paints and also with Victoria Waziri as Ohakim's man friend.Onwu did not stop at that, he went on to say that looting in Imo state is too much and Farida Waziri is turning a blind eye because she is in a love affair with Ikedi Ohakim. That Ohakim has been sending millions of dollars to Mrs Waziri through one Mr. Moses and that Mrs Waziri met with Ohakim in London the last time he travelled and they met at Intercontinental Hotel on Park Lane. That Ohakim has bought the whole of Abuja.

This kit just like others cannot fly because it is too ridiculous and Ndi-Imo are not blind neither are they fools. The story is not attractive. According to Henry Iwuanyanwu “Someone who says his name is Don Onwu is hiding somewhere with a computer, trading insults on Imo State and on our State Governor like a moron. Instead of using his mind to understand the dynamics of transcendental love and experience the bliss of a higher level so he can engage in constructive or rather object or let me say educative debate, he instead subject his medulla oblongata to such depressive views of a lower nature and waste precious time talking blindly and chasing shadows.”

It is like when they pasted General Ibrahim Badamasi Babangida-Ikedi Ohakim joint posters all over Abuja, suggesting to Nigerians that Ohakim was running for Vice Presidential position. The IBB-Ohakim kit did not fly. It was a poorly executed hatchet job. It was one of those failed efforts by detractors of government to bring Ohakim into conflict with President Goodluck Jonathan.

I couldn't help but laugh while reading Don Azuka Onwu's article. I really pity him for I could see the anguish in his mind as he was pouring out his rage.He is obviously a member of the group determined to hold Imo state hostage for their selfish interest. These unpatriotic elements flavour their resolve with some laughable condiments. Reading them only evoke laughter and pity in view of the manifest failure of the intellect as well as the abundance of human inanities 419 to Nigerians is advanced fee fraud.It is a serious crime. An advance-fee fraud is a confidence trick in which the target is persuaded to advance sums of money in the hope of realizing a significantly larger gain.So, who is a 419 person? A 419 person is someone charged to court and convicted of 419.Was Ikedi Ohakim charged for 419 or jailed for 419 ? Don Onwu should tell us .We want to know. Ohakim's 419 stories is like that of my friend Ndu, a successful Accountant and Contractor who visited his village and the never –do- well in the village seeing his fleets of cars, got envious of his success and brandished him Onye Ogwu Ego. They wondered how a small boy like Ndu will get so rich and concluded that Ndu must have done the money ritual. Don Onwu should provide us with facts of 419 activities involving Ohakim and stop name-calling. If he has criminal information about Ohakim let him report to the police for investigation.

Ohakim's achievement is the plank of his confidence for reelection. Ohakim will be re-elected .Already the people have assured him of their 100 percent votes. They argue that he has justified the mandate they freely gave him with his developmental strides and that one good turns deserve another. According to Senator Francis Arthur Nzeribe “ Only the blind cannot see what Ohakim has done, and will continue to do. Only the deaf cannot hear what Ohakim is doing presently and only the dumb cannot pray to God for Ohakim to win a second term mandate. Ohakim is simply phenomenal, irresistible and insurmountable” Nzeribe also said “I know the political strength of all my colleagues, Rochas Okorocha, Achike Udenwa, Ifeanyi Ararume and Chief Alex Obi, very well. I know their consolidated political capacity as well as their individual capabilities. I am therefore, in a good position to say that they cannot beat Ohakim! It is a trite fact that, it will amount to abomination of the first order for an elder to watch a goat die on the string during child bearing.”

No need for character assassins to continue to use pseudo names in making allegations against Ohakim that cannot be substantiated . No need for anyone to try to paint Imo State black because they want people to believe that Ohakim is bad or wicked and is not performing. All their useless politicking will definitely not work since it has never worked. Ohakim has already won the hearts of Ndi Imo due mainly to his performance and come April 2011 elections, Ohakim will defeat his opponents in the poll, black and blue.