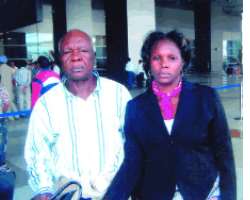 My wife, Goodness Ifeyinwa Opara, whom God used to bring David into this world went with me to India. We were there between November 4, 2010 and January 21, 2011. Fortis Hospital in New Delhi, the Indian capital, was the hospital that we went to seek solution to the renal problem of David, who was born with urinal blockage.

We travelled to India because at Lagos University Teaching Hospital (LUTH) Idiaraba, Lagos, where David was managed between 2007 and 2010, we could not find medical answer, though they diagnosed he had renal failure called chronic kidney disease (CKD).

The Consultant Paediatrician managing him in LUTH gave us a referral letter to an Indian hospital. The letter reads: ' His parents have been extensively counselled on his condition and management options and are well informed of the fact that a kidney transplant is his only hope for cure. Presently, the facilities for paediatric kidney transplant in children are largely unavailable in our country, hence, they have opted to seek this treatment option at your hospital.

I thank you for your expert review and management and look forward to further collaboration with you on his case.

'Presently, the facilities are largely unavailable in our country,' said a doctor in LUTH, a Federal Government tertiary hospital. So, many Nigerians opted to seek treatment option at Indian hospitals, those who could afford it. I paid the bill in Indian hospital, not with my money, but with support of good Nigerians. If I had not that privilege of coming to media for seeking public support, imagine what would have happened. Many have died, who shouldn't have, and more will die. Why?

Within the period, we were in Fortis Hospital in Delhi, there was no morning, that one did not see new arrivals from Nigeria. How do we know? When you see a black person, obviously the skin colour would attract him to you. Then, we would draw near, greet, and ask, are you from Nigeria? If the person is from Nigeria, he will respond in English, but if he is from Congo, (another African country competing with Nigeria), the response would be in French.

I was told at the Nigerian High Commission that, as it is in Fortis Hospital in Delhi, so it is in all thousands of fivestar hospitals scattered in India. The traffic of Nigerian suffering majorly renal, urology (prostrate cancer), heart diseases, diabates, uterine fibroid, orthopedics, thoracic and some others, who come for preventive health checks in India, cause embarrassment.

Dr. Vikas Jain, attending Consultant (urology) in Fortis Hospital, wondered over it and asked, 'why are many Nigerians coming here for treatment. What happened to your hospitals?' I was ashamed to give an answer, but I mustered courage to organise one. The answer I gave was not in defence of our medical system. I was not patriotic because if I had it better in Nigeria, I wouldn't have travelled to spend $36,300 in India. Anyhow, I answered simply that, 'we trust in India's medical competence.

A director of the department of Planning, Research and Policy Analysis in the Federal Ministry of Science and Technology, who was at Fortis Hospital for about two weeks, had urology-related surgery. He felt bad as he saw many Nigerians spending their money in the Indian hospital.

He was embarrassed. He said: 'See how much money we are paying this people. If we have good hospitals in Nigeria, all these money we spend here would remain in our economy and create more jobs for our medical professionals.'

Moneke, expressed concern, stating that if our hospitals are upgraded, the traffic would not be as it is. From experience, I observed that some entered, not with medical visa, but with tourist visa, and decided to do preventive health check-up. Mr.Tijani, who went there for renal transplantation entered with tourist visa, but the visa expired, he went for the renewal and he was made to pay. Medical visa extension attracts no fee.

It is painful to compute how much foreign exchange that is going out of the country through foreign medication. For example, there is no Nigerian that entered India with less than $10,000. Some with serious cases go with more than that. Those of us who went there for renal transplantation, had more than $24,000. Besides, after treatment, many prefer to buy their drugs in India because it is generally believed that Indian drugs are effective. Apart from medication, one also must rent accommodation, whose monthly payment ranges from $600 to $1,000.

Fortis Flt. Lt. Rajan Dhall Hospital is healthcare business which is jointly owned by retired Air Force officer and an Indian businessman with a vision to provide best healthcare service with the best medical professionals to the great number of Indians, but it is sad to see that in Nigeria, our politicians and retired military officers would invest their money in other countries.

As it is now, one does not know who to blame. Either the government for not equipping the hospitals and providing enabling environment or the medical professionals for lack of care and interest in their profession. Does it mean our doctors are not qualified? I don't think so. Though I heard of Nigerian doctor from one of the states in the South- South, who was in Fortis Hospital for cardiac surgery, but the medical expertise he saw humbled him to the extent that he could not disclose his identity as medical doctor. It is interesting to know that many Nigerian medical doctors are visiting India for treatment.

Healthcare, I discovered, is a big industry in India, as one moves round Delhi metropolis, you see very big hospitals strategically located and highly equipped with various modern medical equipment. Medical investigation is made not only easy, but simple and fast. It is as fast as you consult a doctor, he sends out for X-ray, Scan or any other test, you do it and come back with result to see the doctor the same day. In LUTH for example, you have to book between one and two weeks appointment for X-ray while result lasts so long. God help us!