EXCLUSIVE! WHY YOUNG WOMEN ARE WILLING TO DO ANYTHING TO BE A NOLLYWOOD STAR...THE FAME, MEN, WEALTH AND WILD PARTIES 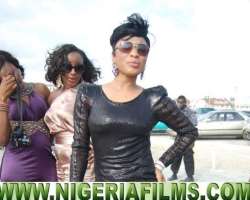 From the suburbs of Accra, Ghana to the bustling streets of Lagos, Nigeria, the hold is almost magical, the dream strong, and abiding. On college campuses, it is often the main issue of discussion, especially among the young and exotic looking pretty students. They have seen their friends and contemporaries take a dizzying leap from the ordinariness and obscurity of their past lives to the mountain of fame, adulation, celebrity status with all the attendant razz-ma-tazz; the wild parties, the men of power and influence, pleading, genuflecting and ready to eat out of their pretty palms. They have seen their friends roll away from the valley of want and poverty into the mountain of new found wealth, where the decrepit food kiosks they used to patronizeonly months before their new found celebrity status are replaced with exotic dining in some of the most expensive restaurants and watering holes in Lagos, Abuja, Accra, Johannesburg-South Africa, Dubai, Port-Harcourt, and other leading cities like Uyo, Owerri, Enugu etc.

They had seen their friends who just a short while back, had put their lives at risk, sitting their pretty limbs on metal contraptions that passed for motor bikes that ferried them about, now ride around town in flashy and custom-made new automobiles, the trucks and other trappings of wealth and good living. They had seen their friends who a while back, had to beg their more fashionable friends to use some of their dresses, shoes and hand bags for parties now parade wardrobes that could make Imelda Marcos green with envy. Above all, they had seen their friends move from the cramped rooms they shared with their fellow students into well furnished apartments in some of the choice locations in town, and they begin to hope and pray for the moment that they too, would join the rank of those nouveau richie – the new glitterati set.

The one tie that binds this new set of wealth totting young women has been their involvement in Nollywood – the African movie industry that has taken the world by storm, creating in the process an avalanche of interest across the globe and stars who have been amply rewarded for plying their craft in the industry. A majority of young women with beauty, poise and elocution now desire to join the ever
expanding list of Nollywood starlets. At any audition or casting call organized by producers, you'd be amazed at the sheer volume and number of young women who turn up to be considered for roles.

Stories abound of these young women desiring to do anything, or go to any extent to ensure that they're selected even for a cameo appearance. Many are said to have been 'couch-cast' a euphemism for trading sex for roles, yet the interest and desire to become Nollywood actresses remains an enduring passion among many young women. The question then becomes: why are these young
women so motivated to become Nollywood actresses? The answer lies in what I have outlined above.

According to several top Nollywood insiders we spoke to, who chose to remain anonymous, since they are major players in the industry, the allure or fascination is based purely on material level. “I mean who wouldn't want to be like Mercy Johnson, Ini Edo, Genevieve, Tonto Dike, Omotola, Rita Dominic, Uche Jumbo, Jackie Appiah, Yvonne Nelson, etc.” our source had analyzed “these are young women who have it all – sleek automobiles, beautiful homes in choice locations and stables of powerful men who are forever willing to indulge their whims.

Let me tell you an instance to buttress this fact. I was with a top actress sometime ago, and her phone rang. The man at the other hand was a very successful businessman, who asked the actress to tell him what she wanted, and to consider it done, if only she would be willing to attend a birthday party he was organizing to mark his 40th birthday. The actress said she wanted to change her car – a 2007 Camry to a RAV 4 truck, and he told her to come and get the key to the new car the next day. And lo and behold! She got the key to the new truck the next day, plus 500.000 Naira (about $3, 500) for gas. I don't want to know what she gave up for all those goodies, but the mere fact that a 23 year old girl, could have a brand new car and a half million Naira for doing nothing, other than being a Nollywood actress provides a compelling reason why most young women would give their right arm to become Nollywood actresses.”

Another source, told us how one of the leading actresses is the official ATM for her friends. “If you were broke, and needed help, and if she (the top actresses) trusted you, she would solve your money problems expeditiously. Once I was on the ropes financially, and I called her for help. She asked me how much money I needed, and I told her I needed about 2000.000 Naira (about $1,500) and she asked me to come over to her house, that she will try to help.

As soon as I got to her place, she called four of her what she called my 'unyielding male friends' – those men who had been promising her a lot of goodies if she would give them a second look. I was surprised to realize that all four men she called send the money she demanded through their drivers within an hour. I recalled one of the guys telling her that she was more valuable than the 300.000 (about $2,000) she demanded, and offered to double it, which he did. In about an hour, my friend had raided close to 2.5 million Naira (about $13,000) without leaving the comforts of her home. I was stunned and in spite of her kindness, envious of such power and hold she had on men.”

Apart from men indulging their whims and seeing them as trophy acquisitions, these actresses are also used for endorsement of various products, which brings them millions of Naira yearly, thereby increasing the pull to become known actresses by most of the starlets and aspiring ones. The downside of all these however, remains the fact that some of these actresses may end up suffering the fate of some of their predecessors who were equally toasted and celebrated, but lost the luster the moment they were no longer considered the 'it' star. As one Nollywood insider intoned “About 20 years ago, soap opera queen – Barbara Soky of the “Mirror in the Sun” fame was like Angelina Jolie of African entertainment. Every man wanted a piece of her, and she was treated like a queen. But where is she today? She has been used, abandoned and dropped like an unwanted item. Even Nollywood, where most had expected her to play a dominant role, given her past professional attainments and pedigree, has spurned her. I am sure she must be wondering in her mind how cruel
and fleeting stardom can be.

So I hope the stars of today who are enjoying the adulation will realize that the life span of most stars in entertainment industry is usually not very long, and that the same people who are toasting them today, will abandon them and move on to newer and fresher faces once the currency of their fame loses its elasticity and appeal.”We hope they are listening!