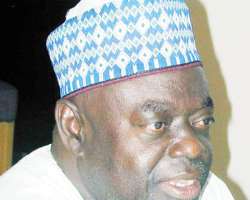 ALIYU BABANGIDA
Mike Odiegwu examines the race for the governorship poll in Niger State and concludes that Governor Aliyu Babangida's main obstacles are in the Congress for Progressive Change and the Action Congress of Nigeria The stage is set. The actors have emerged and the audience has been defined. Each actor has a script and his success depends largely on its content and his ability to memorise and interpret it to win the sympathy of the audience. The audience are watching with keen interests, ready to identify themselves with the most charismatic, benevolent, credible and transparent actor.

The actors, governorship candidates of the four main political parties in Niger state, became flag bearers of their parties after emerging victorious from intra-party elections. The Governor of the state, Dr. Babangida Aliyu, had overwhelming support of members of the Peoples Democratic Party, who declared him their consensus candidate for the top political job in the state.

The party believes that Aliyu, who prefers to be called the Chief Servant, has become a household name and a brand which has a market value. Also, stalwarts of PDP said that Aliyu had interpreted the script (manifestoes) he received from the party in 2007 so well that it would be difficult to find a replacement.

In fact, political observers believe that in the history of democracy in the state, no leader has surpassed the achievements of Aliyu. According to them, if past leaders had done what Aliyu did in three years, Niger would have been the toast of all states in the northern part of Nigeria. At least he was able to construct and rehabilitate vital roads. He paid attention to educational sector improving its infrastructure, teachers' welfare and standard.

Though the state is still grappling with socio-economic problems especially in infrastructural development, observers believe that Aliyu was able to leave his marks virtually in all sectors such as health, sports and agriculture. Perhaps, the suffering people at the grassroots would not forget in a hurry the governor's concept of ward development programme. Every month the governor gives each of the 276 wards in the state N1m to identify and solve its pressing needs. Through the funds which are managed by Ward Development Committees, rural communities have been able to solve the problems of water, flood and road. The money has also been useful in rehabilitating schools and clinics.

Interpreting his roles further, the governor has been able to disseminate messages of his achievements to all corners of the state. Indeed, everybody including children knows the chief servant in the state. His hoardings and posters engraved with his feats are everywhere. People, even the masses in the rural areas, wear him as vests and fez caps while others ride on buses painted with his image. In fact, the face of the chief servant is everywhere beckoning and appealing for support.

Besides, his body language has shown that he is not taking his re-election bid for granted. He has taken some proactive steps. For instance, he has already inaugurated his campaign train and held various stakeholder meetings with different groups in the state. Aliyu has also assembled a 46-member think tank headed by the Secretary to the State Government, Dr. Muhammed Yahaya, with a mandate to work towards delivering all the polling units to PDP.

However, political pundits think that despite his giant strides, Aliyu will not find a return to the Government House easy. They believe that political mines have been buried on the road to the most famous house and that the governor needs experts to uproot them. First, he has to contend with overtures of his formal political associates, who left him angrily to erect walls of opposition in the state. Most of the aggrieved formal allies of the governor can now be found in the Congress for Progressive Change, the Action Congress of Nigeria and the All Nigerian Peoples Party.

But observers have dismissed threats coming from the camp of ANPP. Indeed, internal wrangling has kept the party in tatters. The crisis has divided the party into two factions and stampeded it into holding parallel congresses in the state. The situation was compounded as Mr. David Umaru and Mr. Bala Kuta, began to lay claims to the governorship candidature of the party shortly after the controversial congresses.

Umaru who was the 2007 governorship candidate of the party controls one faction while the other faction is led by Kuta, a member representing Shiroro, Ratia and Muyia Federal Constituency in the House of Representatives. The development has created confusion in the minds of political audience who believe that ANPP is not ready for the governorship race.

While ANPP is languishing in division, CPC is claiming to be the favourite for the governorship position. Its candidate, Alhaji Ibrahim Shettima, has started throwing stones at Aliyu. Shettima, who emerged as the consensus candidate of the party, said he would bring economic transformation to the state. Shettima retired from the Central Bank of Nigeria as a special assistant to the deputy governor of the bank. He played a principal role in the Central Bank's restructuring and re-organisation project code-named EAGLE.

He had vowed to employ the experience he received from the International Monetary Fund Institute and the Central Bank to improve the revenue base of the state. No wonder, he immediately faulted the tax system in the state saying it was not progressive. He claimed that the government lacked creativity to churn up the revenue base of the state through internally generated revenue.

He complained that social and road infrastructure had remained moribund in the state despite over 13 years of PDP's administration. He regretted that the few developmental projects initiated by PDP in the state had been abandoned adding that the government had not found solutions to the security challenges in the state. He specifically faulted the educational programmes of the government observing that pupils were still receiving classes under trees.

He said: 'The urban and township roads are in the state of disrepair. Where the government has taken tentative steps to rehabilitate them it has not taken them to a logical conclusion. The CPC government will give attention to the completion of these abandoned projects.

'A situation whereby some children learn under trees and dilapidated buildings belongs to the old system. In the present 21st century, we need state-of the-art infrastructure for our schools. We need laboratories that are functional and chairs that are motivating. The case of water supply is also a sorry state in Niger state. Even the state capital, Minna cannot boast of regular water supply. CPC will change all of these things'

However, ACN has differed remarkably with CPC. Its candidate, Abubakar Bwari, insisted that the party is the change agent. Bwari a former member of the House of Representatives (1999-2003) and former Chief Whip claimed to be the messiah that will dislodge PDP from the government house. The Director-General of his campaign organisation, Mallam Salman Yusuf, vowed that Bwari would bring total transformation to the state through human and rural development. Specifically he said the party's candidate has promised to build water infrastructure in the state if elected.

But, observers believe that Bwari may have a problem of persuading the political audience in the state to believe in his programme. This is because they observed that most stalwarts of his party including the chairman, Capt. Isa Mokwa (retd) were part of the eight-year reign of former Governor Abdulkadir Kure who did little to develop the state. Pundits, therefore, concluded that emerging candidates should do more than rhetoric to measure up with the standard set by Aliyu who has promised to consolidate on his achievements.