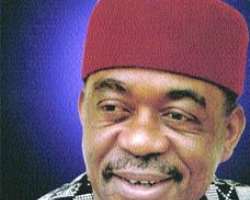 The Deputy Speaker of Abia State House of Assembly, Chief Allwell Asiforo Okere has been accused of importing mercenaries into his village, Ohuru in Ukwa East Local Government. The Abia lawmaker was alleged to have registered mercenaries in the ongoing voters' registration exercise, an allegation the lawmaker had denied.

Daily Sun source hinted that the Deputy Speaker had since the commencement of the exercise been engaged in importing students from a tertiary institution located in Aba metropolis, a school he was said to have visited regularly as Chairman, House Committee on Education.

The source further hinted that Okere who is seeking to represent his people for the third term running, having been first elected into the House in 2003 was said to have employed the services of two of his aides whose names were given as Sunday Okere and Okey Nwachi who used an 18-seater Litace bus belonging to the lawmaker to convey students from the said higher institution from Aba to Ohuru to be registered. The students were said to had been paid various sums for rendering the service.

The purpose it was gathered, was to ensure that the lawmaker whose electoral fortunes were said to have nose-dived over the years. Moreover, since it was no longer the turn of his area to produce candidate to represent Ukwa East in the Abia House of Assembly, got enough people from outside who he was be sure would vote for him during the April elections, to his native Ohuru to register.

Meetings were said to be held regularly at the Ohuru home of the House member who equally presides over such meetings to appraise the success of the exercise or otherwise and re-strategize where necessary. Our source who is from the area said he was worried about the future political implication of what the lawmaker was alleged to be involved in. According to him, 'I am worried stiff about the future political implication of the lawmaker's action to the area. The students that are brought into the village on daily basis to register are not from there.

What happens in the next one or two years when they may have graduated and left the state, would they still come back to vote in our community during elections? It then means the number of eligible voters in the area will be depilated', he said. He said if the National Independent Electoral Commission (INEC's) assurance of conducting a free, fair and credible election this year would be a reality, events such as these and others which had been going on in the place and other areas, would have been checked.

When contacted on phone, Okere denied the allegation. In his words, 'Those making the allegation should come out with clear evidence. Since over one week when I traveled home to register, I have not gone back to my village. What they have told you is nothing but lies' One of the aides accused of involvement in the exercise, Nwachi, equally told Daily Sun on phone over the weekend that there was no atom of truth in the allegation, but refused to entertain more questions as he hung his phone.

Ohanaeze
The Igbo apex socio-cultural organization, Ohanaeze Ndigbo, Lagos State chapter, has told Nigerians in general and Igbos in particular who have not registered in the ongoing voters'registration to take advantage of the extension. The President of the organization, Chief Oliver Akubueze also commended the National Assembly for giving the Independent National Electoral Commission (INEC) the approval to extend the date.

He said it shows that they are listening to the complaints of the people.

Akubueze urged all those had not registered to do so as that would be the only way they could elect the candidates of their choice. He also commended the Governor of Lagos State, Babatunde Raji Fashola for the awareness and incentives he had put in the exercise to motivate people to go and register.

The Ohanaeze chieftain urged INEC to look into the distribution of the DDC machines, adding that while some areas have more than enough, other areas are being starved of the machines. 'Another opportunity is knocking at our door steps and I don't want anybody to be left out. I am appealing to all Nigerians and the Igbo in Lagos to take advantage of the extension of the voters' registration exercise and register. Igbos in Lagos have not been placed in their rightful place in the scheme of things in Lagos going by their contributions to the development of the state. For instance, over 70 per cent of the tax revenue in the state come from us.

But we are not giving substantive positions in the state like being appointed commissioners or board members .Our businesses are also not been protected and everyday we are being exploited and discriminated against. But with our votes we can change all that by voting in an administration that can reckon with us. I also want to urge the Independent National Electoral Commission to look into the lopsidedness in the distribution of the DDC machines.

We have discovered that while some areas have more than enough of the machines. They are not enough in the other areas. That is why in some areas, you can just walk in and register while other areas, you can queue for the whole day without being registered I feel that they should also address this issue as it would help to make the registration faster.

Akubueze also urged the INEC boss not to be distracted by the barrage of criticisms that he should receiving but should be focused on his objective which is to organize a credible, free and fair election election in April.

Katsina
The Emir of Katsina, Abdulmumini Kabir Usman, has allayed fears that eligible female voters in Katsina State may not be allowed to participate effectively in the voters' registration. Receiving a delegation from the Independent National Electoral Commission (INEC) on advocacy visit, the Katsina monarch disclosed that no effort was spared in the mobilization of women and female 18 years and above, across the state to register and obtain their voters' cards in readiness for making informed choices.

The royal father represented by Alhaji Nuhu Abdulkadir, Kauran Katsina, commended the large turn out of women for the registration exercise. Kabir Usman expressed confidence that the women in Katsina were not lagging behind their male counterparts in participating in the exercise as the display of voters' register would show later.

The monarch, who canvassed for the extension of the period for the registration exercise because of the time lost during its shaky start, said the people of Katsina had been adequately sensitized on the exercise and all programmes lined up for this year's electoral process. Earlier, the Director Civil Society and Gender desk, INEC, Mrs. Gladys Nwafor, paid glowing tribute to the monarch for his support and commitment to the nation's democratic development and consolidation.

The director, who was represented by Margaret Ejeh Ikwunja, said the participation of women in all aspects of the electoral process is part of the requirement for the conduct of credible, free and fair elections in the country.

'Concerned about some challenges women face in the exercise of their constitutional rights of political participation, we have come to request the kind support of your royal highness,' Mrs. Nwafor told the Emir.

She advised women and female of voting of voting age should not be disenfranchised by their husbands or parents in the exercise of their constitutional responsibilities. The director also assured that the major changes that had been introduced into the Electoral Act and the constitution would correct past mistakes and pave the way for an electoral process befitting the nation.

Also speaking, the Amirah of the Federation of Muslim Women Association (FOMWAN) in Katsina, Adama Sule Bakori, said women could change the political scene and leadership of the country if they turn out enmasse during this voter registration exercise and the forthcoming general elections.

Yobe
Peoples Democratic Party gubernatorial candidate in Yobe State, Senator Mamman Al-Bishir has alleged that foreigners from neighbouring countries were being imported to partake in the ongoing registration in the state.

Al-Bishir made the allegation at the weekend while speaking with journalists, while assessing the exercise.

'It started very, very slowly' though it is picking up gradually. The major problem we have now is that some mischievous elements are bringing people from far and near, some even from Niger and Chad Republics to come and register as if they are from Yobe State or they live here.  These people they bring in claim they are Nigerians and they will keep them and they will bring them to come and vote during the election. Actually, we are going to frustrate that one.'

Even as he was not forthcoming on the people involved, the PDP gubernatorial candidate however vowed that the plan to rig election through unscrupulous registration would be frustrated. 'I don't want to go into that here.  We have the facts and we shall liaise with appropriate organs of government to handle that.