SAVE ME FROM HANGMAN'S NOOSE - DEATH CONVICT PLEADS 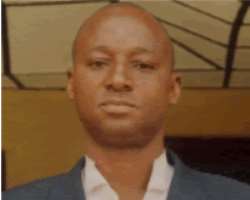 Udeh
Ralph Udeh, 43, was on July 1, 2010, sentenced to death alongside two other persons. They were among 11 accused persons charged with murder, riot and arson in Abia State in 2007, where several people reportedly lost their lives and their bodies missing till date.

This took place in Lokpanta, Umunneochi Local Government Area of the state in January 2007. However, the convict has been pleading that he was not involved, innocent of the charges and is seeking help from anywhere to save him from the hangman's noose. Specifically, the convicted inmate wants Governor Theodore Orji to look into his matter and save him.

In his petition to the governor, written on his behalf by his younger brother, Ugochukwu Emmanuel Udeh, the convict claimed he was not part of the ugly incident he was accused of participating in and that the Police report of the incident clearly exonerated him from the said crime for which he was convicted. He contended that the report was ignored by the court presided over by the retired Chief Judge who sentenced him to death.

He is pleading with the governor to take a look at his case and grant him prerogative right of mercy and set him free .Udeh said he was wrongly tried, and that upon re-examination of his case, the governor would find out that he is innocent of the charges. Udeh is also pleading that he be left off the hook on compassionate ground.

To prove his brother's innocence, the younger Udeh, noted that a petition by the family was sent to the then Inspector General of Police, Mr Mike Okiro, who ordered for a revisit into the investigation and the report of the investigations reportedly exonerated Raphael Udeh.

According to him, the IGP also directed the Abia State Commissioner of Police to immediately release 11 of them including his elder brother, Raph Udeh. The directive contained in a letter and signed by Columbus Okaro, a Commissioner of Police(CP), Legal /Prosecution section of 'D department of the Force Criminal Investigation Department, Abuja ', read in part: 'You will recall that the Deputy Inspector-General of Police ordered for a re-investigation of the above mentioned case by detectives from Force Criminal Investigation Department led by CSP George Chuku. After a careful study of the case , the Deputy Inspector General of Police 'D' has directed that you do the following:

But a spokesman for the Udeh's family, Ugochukwu, told Daily Sun: 'The Abia State Police Command ignored the report and directives of the DIG 'B' Department. Rather than heed it, they rushed my brother and other accused to court sweeping the Abuja's report under the carpet in confirmation of an earlier boast by some people that they would thwart moves of the Police Force HQ. 'To actually show that they meant to send our brother to jail, some of the people who have been threatening to deal with Udeh were appearing at the to counter whatever case Udeh was trying to put forward to exonerate himself.

'The court remanded my brother and others at the Federal Prisons, Umuahia, from where my brother engaged the services of a lawyer who applied and secured his bail on April 2007. He regained his freedom courtesy of Umunneochi High Court presided over by Justice Izima.

'The case was formally filed for trial at the same court that granted my brother's bail. They appeared in court on the three adjourned dates without jumping bail in any of the dates in court. Their lawyers raised the issue of Abuja report but the judge issued an order that the report should not be presented in court on the next date. Unbelievably, as my brother and other accused persons appeared in court, the court ignored the lawyer's comments on the Abuja report. To our surprise, the court reversed itself and refused to accept the report that cleared my brother and others from the crime.

'Rather, the court withdrew their bail and they were remanded in Okigwe Prisons. The case was transferred to the Chief Judge of Abia State, Justice Sunday Imo. At the Chief Judge's court, all efforts to restore my brother and other accused persons' bail were refused by Justice Imo, who claimed he wanted to hear the witnesses before considering their application for bail. They were subjected to all sorts of delays by the prosecuting counsel.

'During the trial that resumed on January 8, 2009, every trick was played including nine adjournments, as one of his police witnesses never appeared in court. For close to three years of this trial, the court was inundated with delays. We endured court strikes, and incessant travels, prompting the court not to sit regularly, waiting patiently for justice to prevail.

'We were, however, always encouraged after each sitting as the truth seemed to constantly be unveiled and the lies against my brother and others totally collapsing as witnesses sharply contradicted each other before and after cross examinations.' However, hope that the perceived unfolding truth would bring justice to the detained persons by releasing them was dashed, as Udeh and two others were slammed with death sentence while the rest were freed.

Ugochukwu said: 'All my brother could do was to shake his head wondering how it was easy for innocent person to be condemned to death, as he was being led out of the dock. My brother and the other convicts were quickly moved away from Umuahia Prisons to Enugu Prisons to calm the nerves of other inmates who were threatening to react violently because of the injustice.

'My brother was never involved in the riot and was never present there. At least the re-investigation proved that. My brother never instigated the women. Rather what prompted their visit to our house in the village was his past ability in settling disputes and encouraging peace in the community and that was the day we were mourning the death of our cousin.

'My brother was not present on the day of the riot, neither did he sponsor anyone as alleged. He was home all day. If they claimed some people died during the riot, then where are their bodies? In court, no evidence to that effect was produced to back up the claim. Even the policemen that re-investigated the case could also not produce evidence that anyone was killed.

We also learnt that the case of death was not incidented at the police station. We are going to file for appeal and we envisage justice would be done.' Ugochukwu appealed to the governor to show interest in the case and help in whatever way he could.