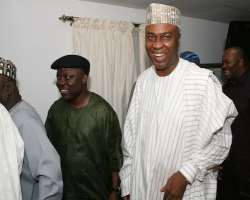 Dr Saraki’s bid for a Senate seat is coming as a surprise to analysts because he had earlier declared his interest to contest the Presidency and when the bid failed he did not announce his interest in a Senate seat until a few hours to the rerun.

His emergence the statement said followed the withdrawal of Alhaji Isiaka Gold from the race, who had earlier defeated Alhaji L.A.K Jimoh to clinch the PDP ticket for Kwara Central Senatorial District.

Earlier, the leader of the five-man Electoral Committee and the Returning Officer for the re-run election, Hon. Anayo Nnebe had urged the delegates to make the primary election a hitch-free exercise.

At the end of the election, Dr Saraki was declared duly elected by Hon. Nnebe having won majority of the total votes cast. He also expressed appreciation on behalf of his committee to the delegates for conducting themselves orderly and peacefully.

In his acceptance speech, Dr Saraki thanked the delegates for the honour done him and assured that he would live up to expectation by serving his people and the constituency diligently and the State as well.

Also speaking, the first runner up, Mallam Yunus Abdulrahman expressed satisfaction with the outcome of the re-run primaries and promised to work for the success of the party at the April election.

The PDP in Kwara is expected to face stiff opposition from two main parties in the state; Allied Congress Party of Nigeria (ACPN), a party founded by the strongman of Kwara politics and father of the governor, Dr Olusola Abubakar Saraki and the Action Congress of Nigeria (ACN).