HOW NOT TO REGISTER VOTERS 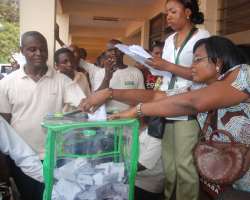 In my previous article titled ‘Jega and the fading optimism’, I dealt with the excruciating experiences of Nigerians trying to register their names as voters in the ongoing registration of voters by the Independent National Electoral Commission (INEC) headed by the erstwhile vice Chancellor of the Bayero University Kano, Professor Attahiru Muhammadu Jega who incidentally came to national limelight during the military regimes when he headed the reputable Academic Staff Union of Universities (ASUU).

I raised a number of issues which cropped up at the announcement last June by President Goodluck Jonathan that he has approved the appointment of Professor Jega to head the Independent National Electoral Commission.

Before Professor Jega was named as the chairman of the electoral body, that institution had attained the notorious status of the worst and most corrupt public institution in Nigeria because of the show of shame that characterized the 2007 general elections which rank as the worst election in the political annals of Nigeria.

This writer also stated that with the difficulties experienced by Nigerians in getting their names registered as voters in the ongoing registration of voters’ exercise due largely to the gross display of ineptitude and inefficiency by officials of the Independent National Electoral Commission, then the optimism raised by a cross section of Nigerians that the appointment of Professor Jega will restore public confidence in the electoral institution will be rapidly eroded.

I got several calls from all across Nigeria and unfortunately, some of my professional colleagues in Journalism who are now working in either the Independent National Electoral Commission or are indeed very close to Professor Jega, accused me of attacking the chairman of the electoral body. A particular caller, who happens to be a man I respect so much, went to the pedestrian level of saying that it was wrong for me to attack Jega since we are in the same civil society community.

A fact that most of these callers forgot is that section 22 of the constitution makes it mandatory that journalists ought to use their media to serve as the conscience of the nation and to raise objections whenever officials of government are derailing or failing to discharge their constitutional duties creditably.

Section 22 of the constitution of the Federal Republic of Nigeria provides that; “The press radio, television and other agencies of the mass media shall at all times be free to uphold the fundamental objectives contained in this chapter and uphold the responsibility and accountability of the Government to the people”.

My last article as aforementioned was not an attack on the person of Professor Jega but was meant to point out the inherent danger to Nigeria’s democracy if officials of the electoral body are left alone to mess up the ongoing registration of voters which in any case is to last for only two weeks which means that Nigerians have only forty eight hours or slightly more to register their names as potential voters.

The problems, difficulties and hindrances faced by Nigerians in getting their names registered in order to obtain the voters’ cards are still very much pronounced in virtually all registration points.

I have been inundated with calls from across the country from Nigerians who told me that for over four days or more, they have being unable to register. I also have a painful personal experience in Abuja while attempting unsuccessfully to register because I discovered that hundreds of potential voters usually troop into the registration point from God knows where, in Wuse two, adjacent former Choscharis motors’ office as early as 1am [one O’clock in the night] in the wee hours of the night to compile their names into a list that would be handed over to the officials of the electoral body whenever they showed up during official times to carry out the exercise which is constantly marred by failure of the Data capturing machines. I visited that particular registration center for three consecutive days and each time I made effort to ask the security operatives from the police and civil Defence attached to the registration center I received the same reply that the list for that particular day had already being compiled the previous night and so I have to report the next night if I ever hope to be registered.

It is a shame that Nigerians have resorted to desperate measures of rushing to the registration centers in the wee hours of the night all in a bid to put down their names for an exercise that ought to begin by 8am each morning which is the commencement of official working hours for the Independent National Electoral Commission. It is also a shame that touting has manifested its ugly head in some of these voters’ registration centers in Abuja because some touts have now hijacked the process of compiling list of people to be registered as early as early hours of the night and the only other way any one coming by 8am can succeed in joining the ‘book of life’ or rather the already compiled list, is to bribe of those persons already entered in that day’s list of those to be registered so that you can take his place and that person who has now received gratification will disappear from the scene and re-appear the next day to also book his name in another new list.

I am also aware that some persons go as far as bribing the security operatives who in turn will bribe the registration officials to facilitate the smooth and speedy registration of that patron who has paid his or her way to obtain voters’ registration card.

Bribery, corruption, touting are all negative attributes of the ongoing voters’ registration exercise because either by omission, commission or design, the data capturing machines deployed by the electoral body in most parts of the country are not working optimally and so the corrupt minded officials are now hiding under the excuses that the machines are not working to perpetrate illegalities.

At the registration point in O.A.U quarters, in Maitama, the officials of the electoral body who are supposed to report to duty by 8am every day disappeared for twenty four hours that is the whole of Friday last week [January 21st 2011] and only reported the next day by 12 pm after this writer had put several phone calls to officials working with the chairman of the Independent National Electoral Commission.

Unfortunately, by the time that the registration officials showed up, over three hundred names of potential voters have being compiled as persons waiting to be registered. For the whole of that day however, only twenty persons were registered but were not issued with their cards because the inks for printing out the cards had finished, according to officials of the electoral commission.

INEC must register every eligible Nigerian voter and the way to go about it is to borrow the suggestion made by the president of the Nigerian Bar Association Mr. Joe Daudu (SAN) to the effect that before the expiration of the two weeks meant for the exercise, a list of all eligible voters must be compiled manually by the electoral body and another one or two weeks period used for recording the finger prints of all those Nigerians that have their names already compiled manually by accredited INEC officials so as not to disenfranchise millions of Nigerians who are unable to register because of the poor state of the data capturing machines deployed by the electoral body.

The Independent National Electoral Commission (INEC) should be told in black and white that it is a breach of the fundamental rights of citizens if some Nigerians are denied their right to be registered as voters.

Article 25 of the international covenant on civil and political Rights states that; every citizen shall have the right to the opportunity, without any of the distinctions mentioned in article 2 and without unreasonable restrictions to

(a) Take part in the conduct of public affairs, directly or through freely chosen representatives;

(b) To vote and to be elected at genuine periodic elections which shall be by universal and equal suffrage and shall be held by secret ballot, guaranteeing the free expression of the will of the elections;

Disenfranchisement of a greater percentage of voters in Nigeria will amount to a gross violation of Article 26 of the international covenant on civil and political rights which provides that; “all persons are equal before the law and are entitled without any discrimination to the equal protection of the law. In this respect, the law shall prohibit any discrimination and guarantee to all persons equal and effective protection against discrimination on any ground such as race, colour, sex, language, religion, political or other opinion, national or social origin, property, birth or other status”:

Section 42(1) of the Constitution states that; “a citizen of Nigeria of a particular community, ethnic group place of origin, sex, religion or political opinion shall not by any reason only that he is such a person

(a) Be subjected either expressly by, or in the practical application of, any law in force (including electoral law) or any executive or administrative action of the government, to disabilities or restrictions to which citizens of Nigeria of other communities, ethnic groups, places of origin, sex, religious or political opinions are not made subject to”.

In chapter 11, Section 14(1) (2) (c) of the Constitution it is provided that the Federal Republic of Nigeria shall be a state based on the principles of democracy and social justice. It is hereby, accordingly, declared that; (c) the participation by the people in their government shall be ensured in accordance with the provisions of this constitution.

INEC must get it right and ensure that all eligible Nigerian voters are registered.