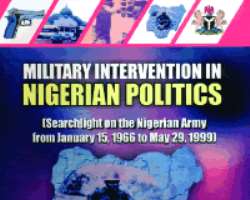 
Some people posit that the Nigerian military parades perhaps the finest set of brains in the land, whether still serving or retired. By the time an officer is fully trained, and has advanced to a certain level in the military, he becomes well rounded both physically and intellectually, and can hold his own in almost all areas of discourse and endeavour.

Another retired military officer, Major Raphael Ajisola Ewuola has proven the veracity of the assertion. In one fell swoop, he is presenting today two seminal works on the military and its interventions in the political life in Nigeria.

The first book, Military Intervention in Nigeria Politics, is in 18 chapters. And the author gives his motive for writing thus: 'This book aims at identifying the cause or causes of disharmony and the lack of camaraderie amongst the Officer Corps and to bring sanity to bear on the military not to allow political activities to over-cloud and override its professional primary role of defending the nation against external aggression and internal conflicts when the needs arise.'

Quite an arduous task the author set for himself. Will he succeed? The answer lies in the womb of time.

Fittingly, this book opens with the history of the Nigerian military, right from colonial days, and the establishment of the British West African Frontier Force by Lord Lugard in 1900.

From his knowledge of the French language, which he studied as a young officer at a university in southern France in 1976, Major Ewuola lets us into the fact that the French word coup means 'to cut up,' while etat is state, nation or country. Coup d'etat therefore is 'the knocking off of a state.' How enlightening for the Nigerian who is familiar with military coup, but who hitherto did not know the etymology of the word.

As a Christian and preacher of the word in civilian life, Major Ewuola parallels coup d'etat with the attempt by Lucifer to seize power in heaven, as contained in the books of Isaiah chapter 14, and Ezekiel chapter 28. He then submits: 'Anyone that stages a coup d'etat against a legitimate government, anointed of God, will have to go the way of Lucifer sooner or later.' Quite heavy. Does it then mean that all those who have staged military coups in Nigeria will never get to heaven? A poser for the author, surely.

The Real Military Problem is the focus of Chapter 3.

Here, the author says the problem with the military pre-1966 coup was the fact that senior officers were seen hobnobbing with politicians of high repute so as to enjoy the spoils of high office. To support this, he cites the account given by Alexander Madiebo, where the then Colonel David Ejoor went to visit Brigadier Ademulegun at home, only to meet the Sardauna of Sokoto, Sir Ahmadu Bello, seated casually on the carpet.

In this chapter, the author reflects on events that led to the first military coup, and concludes: 'It is often said that if there was no crack in a wall, there would be no place for a lizard to hide therein. The civilian regime left its flanks open with its ineptitude, thereby inviting lizards into the bucket of maggots it was carrying on its head.'

Chapter 4 is a collection of different opinions about the real military problem. Views cited include those of Dr Chris Chidebe in the preface of the book 'No place to Hide (Crises and Conflicts inside Biafra),' Bernard Odogwu, in the same book of which he's the author, Major-General James Oluleye, Alexander Madiebo, Adewale Ademoyega, Nelson Ottah, and many others.

The fact that a military coup succeeds does not necessarily mean that the plotters can be called 'successful.' So says the author. In chapter 5, he chronicles successful coups right from the days of Julius Caesar in 49 B.C, to Benito Mussolini in Italy, the Argentinean coups, the Republicans coup in Iraq, Samuel Doe in Liberia, and the ones in Nigerian from 1966 to 1993. He then says: 'The normal thing is for the military to intervene in the government of the civilians, but the abnormal thing was happening here in Nigeria where it was the civilians that intervened in the government of the military.'

'It is a futile efforts to stage any coup at all,' the author posits in Chapter 6, and he backs up this assertion by going back in time to look at power takeover by Macbeth in the Shakespearian play, and then looks at every coup in Nigeria, both successful and unsuccessful. He laments that some brilliant officers fought in the Nigerian Civil War, survived, 'only to come and die in peace time in the hands of assassins and firing squads.' This is not a thing that gladdens the heart, he emphasized.

Chapters 7 to 10 dwell on military governance up to the June 12, 1993 elections. And something sticks in the memory in one of those chapters. 'The military should not run away with the idea that by being recognised as a legitimate government, that it is dong the right thing by taking over or toppling the legitimate government of the civilians that are democratically elected by the collective will of the majority of the people.

Any military government is an aberration.' Heavy words. And food for thought.

He examines the fact that when the military came in 1966, there was a deal with the then civilian regime that the military would only form an Interim National Government. The latter stayed in power for 13 years, and the author asks: 'How interim was interim any way?' But I guess it is the military which must answer that question.

In examining the June 12 imbroglio in Chapter 10, and the aftermath,

the author affirms what we had always known. 'The Abacha take-over of government on November 17, 1993 was obvious enough right from the outset, for any military strategist or a discerning observer to know that the inevitability of Abacha taking over that government was glaring enough for all to see.'

Beyond our shores, Chapter 11 chronicles coup d'etat in Africa, while Chapter 12 focuses on the military headache. And there is this debatable one from the author: 'It is the civilians that will not allow the military boys to rest in their barracks. They are the ones that always stir the boys into action.' True? Not everybody will agree totally.

This is not a book that examines just the problems and does not proffer solutions. That is why Chapter 15 is key. The title is Marketing the Military out of Politics. And the prescriptions include Planning, Organising, Directing, and Controlling. What are the details? Get a copy. And be further educated.

The author is fairly kind to Gen. Ibrahim Babangida whom many Nigerians see as a villain. But page 181 reveals the reason. We see the then Second Lieutenant Ewuola in a photograph with the then Major Babangida, who was the former's Company Commander at the Nigerian Defence Academy. Truly, their relationship dates back in time.

Chapter 16 further deals with how military rule can be avoided in future, Chapter 17 is on the road to democratic rule, and Chapter 18 closes the book. There, you can't miss this one: 'The military should allow the politicians to clear the mess they create, rather than rushing in to seize power any time mistakes, deliberate or indeliberate, are made. Let the politicians learn from their own mistakes and make amends for the better.'

The second book, Civilian & Military Politicians in Nigeria is not far from the first one in terms of thrust and focal point. It is also in 18 chapters, and delves into the concept of man as political animal, the origin of military forces, evil inherent in military dabbling into politics, and then, in another chapter, looks at civilian and military politicians in comparison. To show that he is not just a chronicler of military affairs, Major Ewuola's postulations in Chapter 17 are worthy of note. He dwells on the 2003 politics of 'change' in the South West. Get details of the consequences of the election that was manipulated in favour of a certain party in 2003.

Equally stimulating is the final chapter, which prescribes the way forward for Nigeria and her democracy.

Apart from the fluid, easy to read way in which these two books are written, one cannot miss the depth and profundity of the facts and information therein. Equally commendable is the clean, almost error-free text. But this is hardly surprising, since apart from his own rich intellectual background, the author also has as consultant Professor Dele Orisawayi of the Department of English and Literature Studies, University of Calabar. No wonder the sentences are elegant, the text devoid of annoying errors common to most Nigerian books.

I recommend these two books to all and sundry, but particularly to the military and our politicians. Reading the books will help them fulfil their callings better and not stray into dangerous territories.