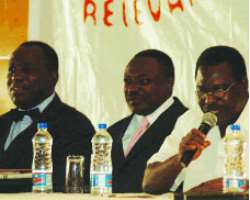 The conference portended a somewhat post mortem on the much publicised Bring Back the Book project initiated last year by President Goodluck Jonathan. Yet it provided another platform for all stakeholders to be heard on the vision of regaining the lost culture of reading among Nigerians.

The one-day seminar tagged Bring Back the Book Initiative, organised by the Committee for Relevant Art (CORA) in Lagos opened a new vista in the on-going quest for the Nigerian book and its reader.

Held at the Banquet Hall of Eko Hotels and Suites, Victoria Island, the conference had the theme When the President Wants to Bring Back the Book, What's to be done Now? and paraded a number of stakeholders drawn mainly from the book industry. In attendance were publishers, writers, book marketers and distributors, librarians, journalists as well as members of relevant NGOs and associations.

The conference was strategically divided into three main segments, including Business of the Book; Creative Aspect of the Book, Educational aspect of the book and the Promotional Aspect of the Book. The first segment expectedly premised on the economies of book production amd marketing. It featured two main papers delivered by the duo of Kunle Shogbehin and Lanre Adesuyi and was aptly moderated by Ben Tomoloju, foremost culture journalist, communicator and former Deputy Editor of The Guardian.

Shogbehin whose paper focused on what the publishers want commended President Jonathan's initiative on books and linked it with the American Reading challenge Act of 1997. He described books as special products which drive economic growth and development. According to him, publishing thrives on literacy and education, hence the environment has to be conducive fro learning before the country evolves a virile reading culture.

But after listing virtually all the constraints against publishing, Shogbehin concluded by suggesting the way forward. He canvassed that paper machinery and equipment should be exempted exempted from tax by the government, and that the Banking and Finance sector should give credits to knowledge-based industries. Shogbehin also called on the electronic and print media to grant reduced adverts rates for those involved in the business of disseminating books.

He thereafter asked governemnet at all levels to institute literary and creative prizes as an inducement to creative writers. Besides, he urged that government should support book exhibitions and fairs aside promoting Nigerian books at international fairs. He insisted that government should equally provide grants for NGOs and other outfits taht are working for theknowledge sector. He rounded off by asking for the empowerment of the Nigeria Copyright Commission as well as the need to set set up a Book Advisory Committee in the Presidency.

For Lanre Adesuyi, the book project by the president should be backed by political will if success would be attained in reviving reading culture. According to Adesuyi who traced the history of Nigeria's educational sector right to 1960, when the Western Nigerian government set the pace for others by introducing free education, the Federal government should now support the initiative by revising the National Book Policy.

Adesuyi also quoted former Vice President Alex Ekwueme as affirming that book desrves a place of honour in national priority list, noting among others that the economic recession of the 1980s and 1990s brought about book famine to the country. But more essentially, Adesuyi called on the Nigerian government to create more jobs for thousands of graduates roaming the streets aside working to eradicate corruption in the land.

While also blaming government for widespread poverty and decayed infrastructure, Adesuyi tasked the ruling class on the crusade of bringing back the book, just as he asked parents to live by example in creating good values (including reading culture)in their children and wards. In the same way, he asked the federal government to emulate its Indian counterpart which has since been promoting and marketing books from its shores to other countries of the world.

Earlier at the conference, Douglas described the Bring Back the Book project as an enduring legacy of the President. He noted that the project is in line with the soul, right and relevance of Nigeria in the comity of nations and that it is important for the country to raise that bar by placing the book where it ought to be. For Toyin Akinosho who presented the CORA statement, an address at at a conference on books could not be complete without reading an excerpt from a book. So he started his speech by reading from Carol Enahoro's Doing Dangerously Well, and thus set the tone for CORA's mission statement and commitment to literary development in Nigeria.

According to Akinosho, CORA which strated its culture advocacy 20 years ago has over the years moved from advocacy to extension service. The latter has forced the committee to dwell more on literacy and literary development, hence many of its quarterly discussions centred on books and reading culture. And as it would later turn out, CORA, somewhere along the line initiated the Lagos Book Fair (LABAF) not merely to exhibit books but to encourge discussions on the contents of selected books aside hosting writers and authors to readings and interactions. And lately too, CORA has extended its services to schools and communities, spreading the gospel of literacy and promoting writers and their works on a larger scale.