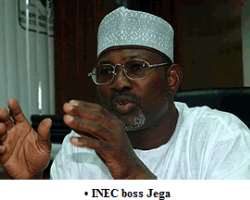 Shock and disbelief could best describe the mood of Anambra State Deputy Governor, Mr. Emeka Sibeudu and the Resident Electoral Commissioner (REC) for the state, Prof. Chukwuemeka Onukaogu, yesterday when the duo led security operatives to discover four registration centres located at a shrine in a deep forest.

The four centres which are in the deep Nziko forest at Nteje in Oyi Local Government Area, were manned by registration officers and had, at the time of the discovery, registered only about 200 voters since the commencement of the exercise 10 days ago.

Following security reports made available to Governor Peter Obi, his deputy and the REC led security operatives to the forest where the startling revelation of the four centres with the accompanying Direct Data Capture (DDC) machines was made.

On arrival at the forest which took about 40 minutes drive from the nearest residential area, the registration officers, mainly corps members, were idle and gazing at the machines with virtually nobody to register.

Reacting to the incident, the shock-stricken Prof. Onukaogu, described as painful, the discovery of four centres serving nobody in a thick forest when there were not enough machines for potential voters in places like Awka, Onitsha, Nnewi, Adazi, Agulu and others.

He said: “I have heard of floating/flying polling booths. Today, I have seen one. I am sad that there are four machines wasting here, whereas there are no machines in Onitsha, Eke Awka, Ozubulu, Nnewi and parts of Anaocha where thousands of people are waiting to be registered.”

Onukaogu noted that the four centres had registered only about 200 voters since the exercise started 10 days ago, when the same machines would have registered several thousands had they been located in densely-populated areas.

He said the irregular location of the centres also posed grave risk to the registration officers and the machines, questioning, “how will I evacuate men and machines in the event of danger?”

The REC boss alleged that the centres have been secured by an influential politician from the area, who would want to use it to rig election, but assured that he would remove three machines and leave one behind, just as he would need to meet with the registration officials before taking action.

Onukaogu stressed that he was constrained by the fact that the “floating registration centres” deep in the forest were documented from the INEC Abuja headquarters and assured it would be corrected. Also speaking, the Deputy Governor, who expressed shock at the location of the registration centres, said: “We have shortfalls in machines. But in the forest here, there are four machines lying idle. All the people we met here are not up to 10. But if you go to some other places, you will find thousands of people waiting to be registered”.

Describing such registration centres as what people use to perpetuate electoral fraud, the deputy governor said: “This, I can assure you, is part of the rascality of the past which the present government under Mr. Peter Obi is trying hard to stamp out of the state.”

However, a former deputy chairman of Oyi Local Government, Chief Samuel Offorkansi, who is overseeing affairs at the voting centres, insisted that the place had been serving as voting and registration centres since 1998, stressing that contrary to what the people think, the centres were in the midst of densely populated villages.