OBAMA ADDRESSES ECONOMY, UNITY IN STATE OF THE UNION SPEECH 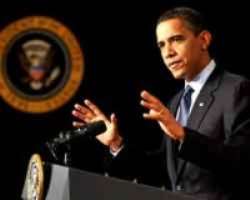 ADDRESSING a demand for economic answers, United States (U.S.) President Barack Obama has put up a bold effort to convince the American people and a divided Congress that he has a vision for speeding up job creation, promoting spending on the core of his agenda but promising to rein in a growing, staggering debt.

In his State of the Union address, the American leader reflected the reality to a nationwide television audience, to address jobs, the issue of most importance to the public and to his hopes for a second term.

Specifically, he focused on improving the education, innovation and infrastructure of the United States as the way to provide a sounder economic base. Also, he backed calls to reduce the government's debt - now topping $14 trillion - and reform government. Those five areas framed the speech, with sprinklings of fresh proposals.

The midterm elections gave Republicans control of the House and a stronger minority vote in the Senate, meaning he hasn't the option of pushing through changes over GOP objections. The contrast between the two parties' visions remains stark, and where to slash spending, and by how much, will drive much of the debate for the rest of 2011.

Obama's speech came just hours after the House was to vote on setting spending for the rest of the year at 2008, pre-recession levels.    That resolution, largely symbolic, would put Republican lawmakers on record in favour of cutting $100 billion from Obama's budget for the current year, as promised in last year's campaign.

In an atmosphere that was more sober and civil than in recent years, the president gave nods to American interests around the globe, with a traditional foreign policy section that will cover the wars in Afghanistan and Iraq, terrorism threats and diplomacy.

The speech came less than three weeks after an assassination attempt on Democratic Representative Gabrielle Giffords in Tucson, Arizona. She is recovering remarkably well after being shot in the head during a one-man rampage that left six dead.

Among those who will sit with first lady Michelle Obama at the president's speech will be the family of a 9-year-old girl who was killed, an aide to Giffords who rushed to help her at the shooting and trauma surgeons who have treated the wounded lawmaker.

In an attempt at unity following an attack on one of their own, some Democratic and Republican lawmakers sat together at the speech. It came a year after Obama's rebuke of a Supreme Court decision in his State of the Union speech led Justice Samuel Alito to mouth back from the audience, 'Not true.'

'If you want an important speech out of Barack Obama right now, he already gave it,' Riley said, referring to the Arizona memorial on January 12.

'What's going to happen now with the State of the Union is part of the ongoing story of Washington, and it is a significant event in the political calendar. Yet from a historical perspective, they just tend not to make a difference.'

Obama in his speech tried to emphasize economic priorities that could draw both public appeal and enough Republican consideration for at least serious debate.

He wrapped them all under the heading of helping the United States to compete more successfully in the world – a 'win the future' rallying cry that Obama's aides hopes will resonate with both workers and business executives and bind the political parties.

Obama has spoken consistently about investing in energy, education, research and transportation. To Republicans, those are code words for more spending.