TRADERS LAMENT AS OCHANGA MARKET GOES UP IN FLAME 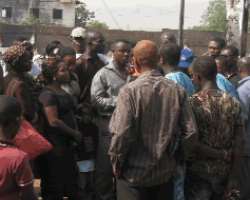 Some of the traders
Traders in the foam market at Ochanga popularly called Menance in Onitsha, Anambra State will not January 14 2011 in a hurry. On that fateful day, fire razed their shops and destroyed good worth over N500 million.

Daily Sun gathered that the fire whose cause was not ascertained started in the evening on that Friday when the owners of the shops had closed for the day and retired home after the day.

According to an eyewitness, Mrs. Ngozi Uwadiegwu, 'the fire started at 8:30 p.m when the traders had closed their shops and retired to their different homes which made it impossible for any of them to save his or her goods.'

Narrating the incident to newsmen, the Chairman, Foam Dealer's Association, Mr. Uchenna Omuka said the cause of the fire was not yet known, adding that the traders in the market had lost everything to the fire.

Hoodlums on rampage
According to Omuka, the matter became worse when hoodlums stormed the market in the guise of trying to safeguard some of the goods and money from being burnt, but only to divert same into their pockets.

He also lamented that all efforts by policemen and other security agencies to save some of the goods proved futile as the fire began in the section where foams were packed, thereby making it ferocious.

Omuka also regretted the incident, saying that lack of equipment and water in the market had contributed to the woes of the traders, especially those in the foam market and called on the state government and other good spirited individuals to come to their aid.

He pointed out that it took the intervention of the Fire Service to save the situation from escalating to other buildings and shops in the market.

One of the victims of the fire outbreak, Miss. Obianuju Nwankwo said that she had just replenished her stock that Thursday only for the fire to raze all the goods, thus rendering her indebted to the company she bought them from.

Her words: 'I just offloaded my goods on Thursday because I deal in thread and as I am talking to you now, I have not paid up to half of the money to the company and it has been destroyed by fire, tell me what I will tell the company.'

Government reaction
The Executive Director, Anambra State Emergency Management Agency, SEMA, Mr Nwabufo Ijezie, described the incident as unfortunate, saying that the agency was going to recommend compensation for the victims of the fire.

He also said that the state SEMA was committed to making sure that such incident was taken care of as well as to bring measures towards sensitizing traders on risk management and processing.

On his part, the Head of Administration, Onitsha South Local Government Area, Hon. Richard Obi, lamenting at the scene of the incident promised to send the report and complaints of the victims to appropriate quarters.

He also said that plans were afoot to sink more boreholes in the markets within Onitsha South council area to provide the traders with water to tackle such incidents.