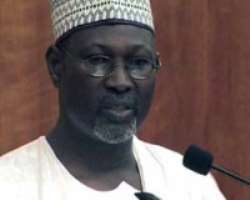 While the Senate summoned the Independent National Electoral Commission (INEC) Chairman, Prof. Attahiru Jega to appear before it this morning for a collective search of solutions to the problems trailing the exercise, the House of Representatives removed the legal hurdles to extending the listing of Nigerian voters.

The Senate, which also deplored the closure of primary and secondary schools in the country for the purpose of allowing Nigerians to fully participate in the scheme, ordered their immediate re-opening.

At the Lower House, members, who resumed plenary yesterday, hurriedly amended the 2010 Electoral Act to give INEC the latitude to extend the exercise for another four weeks.

At the instance of a motion moved by the Deputy Senate Leader Victor Ndoma-Egba, the Upper House resolved to invite Jega to the floor today to offer explanation for the avoidable lapses inherent in the listing of the electorate.

Since the exercise began, there have been widespread complaints and in many areas, the officials conducting the exercise have not been able to use the Direct Data Capture (DDC) machines.

Ndoma-Egba further said that some members of the National Youth Corps Service (NYSC) handling the exercise had abandoned their duty posts due to insecurity and delay in the payment of their allowances, adding that some of the machines had remained faulty and could not capture images 'despite the huge amount approved for the exercise.''

The Deputy Senate President Ike Ekweremadu said he almost ran into trouble when the exercise commenced because he had mobilised people within his senatorial district to register  but when they got to the centres, they were unable to register and therefore, returned to confront him. According to him, 'we are in double jeopardy because we cannot register yet schools are closed.''

The Minority Leader Maji Maina Lawan described the exercise as a sham and lamented that out of the 10 local councils in his senatorial district, six did not have DDC machines. He said instead of accepting that there is a problem, INEC still said that the exercise was moving smoothly.

The Majority Leader Kanti Bello, supported the invitation of Jega, adding that 'what he has been saying is different from what is on the ground.''

Senate President David Mark put the question and it was resolved that Jega should appear before the lawmakers today. The senators also voted overwhelmingly for the reopening all shut schools in the country to enable pupils return to their classes.

In his welcome address to the senators, who reconvened from the Christmas and New Year break, Mark drew their attention to the registration exercise, saying the teething problems which arose at its beginning appeared to persist.

'I am generally very optimistic but I am afraid the ongoing registration does not give me much confidence. The teething problems now appear to be permanent and they are not going away. As we speak today (yesterday), there are so many local governments without DDC machines and nobody knows when the machines will get to those destinations. Unless there is a drastic improvement, very many eligible voters may not get registered,'' he said.

Mark also charged the security agencies to go after those who allegedly stole some of the machines just as he urged the Senate Committee on Electoral Matters to wade into the crisis.

Mark said: 'The Senate Committee on INEC through its oversight function, must ensure that all eligible voters are registered. This has become more worrisome in view of Section 9(5) of the 2010 Electoral Act as amended, which states that voters' registration must stop 60 days before the election. This means that registration cannot go on beyond February 2, 2011 technically.''

He, however, assured that the Senate would pass the Freedom of Information (FOI) Bill and the Petroleum Industry Bill (PIB) before the end of its session.

Reiterating the resolve of the chamber to cut down cost of governance, he said: 'We will honour our promise to reduce our overhead expenditure and to ensure that the general overhead of the federation is reduced even as we will continue to pursue and insist on prudent fiscal and monetary policies. The PIB Bill and Anti-Terrorism Bill will have to be accelerated for us to reap the dividends from the oil industry and guarantee maximum improvement on the safety of life and property.

Briefing journalists after session, Senate spokesman, Ayogu Eze, said the controversy surrounding INEC's January 15, 2011 deadline for the conduct of party primaries was unnecessary because it was an internal affair of political parties.

He said: 'INEC has no right to fix primary election dates for political parties. It is an internal affair of the parties provided it does not go beyond 60 days to the election.

'What INEC is mandated to do is administration of elections. The primary elections and congresses are at the discretion of the political parties. While I don't quarrel with INEC timelines, I believe that the law does not empower INEC to determine when parties conduct their primaries provided that it does not go beyond 60 days to the election.''    In an apparent reaction to the public outcry against the slow pace of the enumeration of the electorate and the need to extend the deadline, the House suspended its relevant rules and procedures to have the bill immediately passed for first, second and third readings on the floor of the chamber.

Thereafter, the House suspended regular plenary for another two weeks, which the Speaker, Dimeji Bankole, said was to enable the chamber's standing committees work on the 2011 Appropriation Bill now before the National Assembly.

Bankole also directed the immediate transmission of the amendment bill to the Senate for harmonisation and concurrence as required by the constitution.

Later at a press conference, spokesman of the House, Eseme Eyiboh, defended the suspension of plenary, stating that members need to be engaged in the voters' registration exercise by way of mobilising their constituents to perform their civic responsibilities.

Explaining the general principles of the Electoral Act (amendment) Bill to lawmakers, Chairman of the House Committee on Rules and Business and lead sponsor of the bill, Ita Enang said INEC could only extend the deadline, if Section 9(5) of the 2010 Act was amended.

The section states that all voters' registration process must stop not later than 60 days to the commencement of the general elections, and by that provision, INEC would have only two days extension possibility since it fixed April 2, 2011 for the first polls on the timetable released late last year.

Ruling after the unanimous voice votes in support of the amendment at the three stages, Bankole said: 'By this amendment, INEC can now extend the deadline for maybe, another four weeks,' followed by the two weeks suspension of plenary.

The almost two-week-old exercise, which started on January 15, 2011, has been laden with several challenges from take-off, including slow response of the Direct Data Capture (DDC) machines, rejection of fingerprints as well as non-availability of the machines among others. These prompted INEC and the Presidency to give hint of a possible extension from the January 29, 2011 deadline.

And despite the lapses associated with the voters' listing, independent observers have said the exercise is gradually gathering momentum after the slow start.

A report compiled by Project 2011 Swift Count, an amalgam of the Federation of Muslim Women Association of Nigeria (FOMWAN), Justice Development and Peace (JDP)/Caritas Nigeria, Nigeria Bar Association (NBA) and Transition Monitoring Group (TMG), indicated that about 1,000 observers were deployed to the nation's 774 local councils for three days of the first week, who hinted that reasonable progress had been made.

In a statement in Abuja yesterday, Moshood Erubami, who is the 1st Co-Chair of Project 2011 Swift Count said on the first few days, all Nigerians knew there were serious problems with distribution of and functioning of equipment. While everyone knows this from their individual experiences, our project is able to put out hard facts, collected through a rigorous and comprehensive observation and our data presents a detailed picture showing the process starting very poorly, but with dramatic improvement over the course of the first week.'

He explained that the trained and accredited observers collected information on Saturday January 15, Thursday, January 20, and Saturday, January 22, 2011.

The group however advised INEC to provide detailed information on the number of people registered daily.

In Akwa Ibom State, the government has declared Friday a work-free day to enable public servants to register.

Similarly, the authorities of Uyo Main Market and other major markets in the metropolis, have said the facilities would be closed today to enable the residents register.

After the State Executive Council (SEC) meeting, the Commissioner for Information and Social Re-orientation, Aniekan Umanah, told journalists that the government had directed that parents and guardians must have evidence of their registration to benefit from the state free and compulsory education programme.

'Voters registration card will therefore be used for self-identification in matters of personal emolument and staff promotion in the state, even resource persons handling inter-ministerial projects and even quasi-contracts will be required to identify themselves with their voters' registration cards', he said.