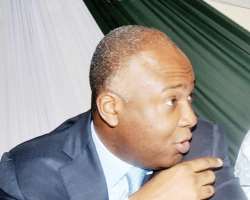 SAN FRANCISCO, Jan 24, (THEWILL) - The Action Congress of Nigeria (ACN) has accused the Kwara State government of compromising the ongoing voter registration exercise in the state by giving N50,000 naira in cash to each of the 1,872 polling centres in the state.

But the Kwara State Government has said the donation was done ‘to cushion the hardships likely to be faced by the registrants.’

The donation she said, ‘should therefore not be interpreted to mean bribe to the registrants or INEC officials on duty but a way of supporting and assisting the on-going registration process.’

THE ACN however wants the ‘donation’ investigated by the electoral commission.

In a statement issued in Ilorin, Kwara State today by its National Publicity Secretary, Alhaji Lai Mohammed, the party urged the Independent National Electoral Commission (INEC) to urgently investigate the reason behind the ''donation'', which was announced on the radio but the purpose of which was not stated.

It said the need for INEC to investigate the inexplicable monetization of the registration exercise in Kwara State becomes even more imperative because the commission has warned against any such unsolicited financial assistance for its officials nationwide, in view of its implications.

''We are also worried about this Greek Gift from the Kwara state government against the backdrop of reports that some DDC machines are being used to register voters in certain unauthorized locations in the state,'' ACN said, adding: ''We know for sure that Nigerians are resolved to fully participate in the voter registration exercise without any financial inducement.''

''The immediate provision of answers to these posers, which are at the core of the investigation we are seeking, will help unravel the real motive of the state government in playing 'Santa Claus' in January. It will also allay the fears of many

people in the state who have expressed grave concern over the donation,'' ACN said

It warned that since voter registration is the bedrock of successful elections, the ongoing exercise must not only be free, fair and non-partisan, it must be seen to be so by all Nigerians who are yearning for free, fair and credible polls in April.

The Kwara State Government Explanation On The Donation

The attention of the Kwara State Government has been drawn to a statement in circulation by a notable opposition party over the N50, 000. 00 cash donation to each registration point in the on-going voters’ registration exercise to cushion the hardships likely to be faced by the registrants.

The Speaker of the State House of Assembly, Alhaji Babatunde Mohammed, who was reported to have announced the State government’s donation, did so out of the magnanimity of the State Governor, Dr Bukola Saraki and his care for the people of the State.

The donation should therefore not be interpreted to mean bribe to the registrants or INEC officials on duty but a way of supporting and assisting the on-going registration process.

Well-meaning individuals and philanthropic organizations nation-wide have risen to the challenge of coming to the rescue of INEC to ensure a successful registration exercise, bearing in mind that the onus rests on every Nigerian to ensure the success of the exercise once and for all.

The motive behind the gesture of the state government was to lessen the burden of its citizens, who in most cases often spend the whole day at the registration unit in an attempt to secure voter’s card arising from various challenges being encountered at the centre.

As responsive and responsible Nigerians, every eligible voter is entitled to a voter’s card to be able to exercise his/her civic right and this can only be done by obtaining a voter’s card. Therefore, nothing legal would be too much to ensure its success.

No reasonable person would read any negative meaning to the State government’s gesture as it was done purely with an open mind to enhance the registration process and lessen the burden of the people of the State.

The general public is hereby advised to disregard the misinformation being peddled around about the state government’s donation by those whose trade in stock is nothing but condemnation, as it was merely to enhance the registration process and lessen the burden of the registrants throughout the duration of the registration exercise irrespective of party affiliation.