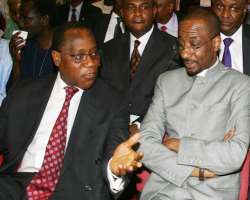 Nigeria issued a $500 million debut Eurobond today with a 7.0 percent yield in a deal that was heavily oversubscribed, as appetite for high-yielding assets outweighed concern about its depleted oil savings.

The successful issue by Africa's top oil exporter, months ahead of elections, could reassure others on the continent of the strength of demand for African debt, convincing them to press ahead with similar but delayed plans.

"The offer has been oversubscribed 2.5 times to about $1.25 billion," a source close to the deal told Reuters.

The 10-year bond was priced in line with Nigeria's 7.0 percent guidance and will pay a 6.75 percent coupon, with settlement on January 28, Thomson Reuters news service IFR said.

The pricing means investors demanded a premium to West African peer Ghana, whose 8.5 percent Eurobond due 2017 is currently yielding around 6.2 percent.

While demand for high-yielding assets, the paucity of West African credit and the relatively low volume of the issue had been expected to fuel appetite, some potential investors were put off by the rapid depletion in Nigeria's oil savings.

Fitch assigned the issue a 'BB-' rating on Friday, saying low debt ratios and robust growth played in Nigeria's favour, but also noting concern about a decline in reserves last year despite a rise in oil prices and production.

"Reserves have risen around $1 billion since the end of 2010, but in the absence of fundamental institutional reforms on the usage of oil revenues and savings, this gradual build-up is unlikely to be sustained," Fitch said.

Standard & Poors has assigned a 'B+' long-term senior unsecured debt rating to the issue.

One leading fund manager who participated in Eurobond issues by Ghana and fellow African oil producer Gabon at the end of 2006 said he was steering clear of Nigeria's offering given concerns over the huge outflows from oil savings.

VANISHING SAVINGS
Nigeria's excess crude account (ECA), into which it saves oil revenues above a benchmark price, has dwindled to less than $1 billion from $20 billion at the start of the current presidential term four years ago.

Foreign reserves, of which the ECA is a part, inched up month-by-month to $33.5 billion by mid-January but are still down more than a quarter on year-ago levels.

Nigeria has shrugged off the concerns, saying the spending was needed to defend the naira currency against increased dollar demand, fund projects in the power sector, and provide seed funding for a planned sovereign wealth fund, which should form a firmer legal basis than the ECA for safeguarding oil savings.

Central Bank Governor Lamido Sanusi told Reuters late on Wednesday he believed the fall in reserves would end as the country's banking sector gets back on its feet after a 2009 bailout and as oil production and prices rise.

"We had to draw on forex (reserves) to meet elevated (dollar) demand levels as we couldn't risk an accelerated exit from quantitative easing while banking reforms were still at initial stages," Sanusi said.

"Now with monetary tightening, higher yields, a recovering equity market ... and progress on banking resolution, a higher oil price and stable output, my sense is that the reserve attrition will stop," he said.

The point of the Eurobond issue by Sub-Saharan Africa's second-biggest economy is to set a benchmark yield curve in the global market, rather than to raise funds, meaning the country has ample funds to repay investors.

"Overall, the risk of default on the Eurobond is marginal," he said in a research note.