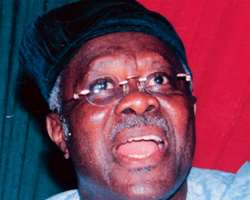 Bode George
AN appeal filled by Chief Bode George, former chairman of the Nigerian Port Authority, NPA, and chieftain of the Peoples Democratic party, PDP was today rejected by an Appeal Court sitting in Lagos.

George had approached the Appeal Court to upturn his two years jail term at the Kirikiri Prison.

The Economic and Financial Crimes Commission had on August 8, 2008 arraigned George and the other accused on a 163-count charge that bordered on alleged abuse of office and award of about N100bn contracts without due process. George, and five others were sentenced to two years imprisonment without an option of fine in October 2009 and expected to serve till July 2011.

At the federal court of appeal in Lagos, Justice Clara Ogunbiyi JCA , ruled that Mr. George's application has no merit. The PDP chieftain was sentenced to prison for corruption on October 26, 2009. His prison term is billed to end in July 2011.