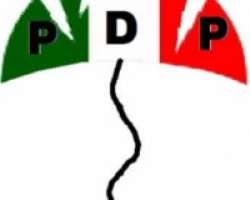 Party to give zone deadline on new chairman
Anyim faces opposition from Ebonyi
MAJOR stakeholders in the race to producing the successor of Dr. Okwesilieze Nwodo as the Peoples Democratic Party (PDP) chairman from the South-East geo-political appear set to change the goal post and game plan.

Unlike their earlier insistence that the office remains in the zone after Nwodo's resignation on Tuesday, governors from the region reportedly developed cold feet towards the office.

And if they carry the day, the PDP's balance of power at the national level may be altered as another office may be allotted to the zone.

But all this will wait till after the general elections and if President Goodluck Jonathan wins the presidential election, another zone outside the South-South and South-East will produce the new PDP chairman.

However, a leader of the PDP in Imo State, Oliver Enwerem alluded to this yesterday when he told The Guardian that the seven-man committee set up to screen candidates for the chairmanship post is no longer necessary as election is fast approaching.

According to him, the thinking of the majority of PDP in the state is that the acting chairman should be allowed to serve the remaining three months after which 'we can now seat down and shop for a replacement.'

Since the return of full-blown democracy to the country in 1999, only the North Central and South-East zones have produced the chairmen of the PDP.

The occupants were the pioneer chairman, Chief Solomon Lar from Plateau State, Chief Barnabas Gemade (Benue), Chief Audu Ogbeh (Benue), Col. Ahmadu Ali (Kogi), who are from the North Central and Chief Vincent Ogbulafor from Abia State and Nwodo (Enugu), the duo from the South-East bloc.

Feelers from the various government houses in the four states of the South-East except Anambra State yesterday showed that the state chief executives are no longer keen on presenting any of their kinsman for the PDP plum job again.

The Guardian learnt that apart from pushing that the new chairman emerges after the April general elections, the governors consider the two persons being tipped for the office as too influential for their liking.

One of the governors, whose state is expected to vie for the office, is said to have refused to discuss the issue with anyone or call a formal forum to discuss the matter with other stakeholders.

It was also learnt that one of the governors openly told his aides that 'the South-East is tired of occupying the PDP chairmanship seat, let them take other things else. We have elections at hand and that is our priority for now.'

Another governor allegedly said that he did not want any more trouble in his state over the chairmanship slot, citing the crisis that a similar move generated in the state when a former Senate President and an erstwhile governor were favourites for the office.

Amid the controversy, it was learnt yesterday that the PDP national leadership might give the South-East an ultimatum to produce Nwodo's successor.

The leadership of the party has allegedly insisted that the zone produce the next chairman to take the party through the April general elections in spite of the new stand of the governors.

A PDP official said the party is worried that if the zone is not put under pressure, the issue of the next chairman might drag longer than necessary and it could affect its chances at the elections.

The issue allegedly featured prominently in the discussion which the members of the National Working Committee (NWC) led by Bello Mohammed had with the President yesterday in Abuja.

The only state, where some stakeholders have shown interest in the PDP chair is Anambra, where there have been pockets of protest against alleged attempt to exclude the state from the race.

The governors' apathy to the office can be deduced from the situation in Imo State. There is no PDP leader in the state that discusses the issue of fielding a candidate for the office.

Even Nze Fidelis Ozichukwu, who allegedly being pushed for the office from the state claimed ignorance of it.

When contacted yesterday, Ozichukwu said: 'I am not aware of anything like that. Nobody has told me of it. I am just hearing it from you. Right now, I am in the village and it will be foolhardy to comment on what I don't know.'

Reacting to The Guardian's report yesterday that Anambra State had been excluded from the contest because it is under the platform of the All Progressive Grand Alliance (APGA), Olisa Metu, said the party members would not accept the position.

He said the fact that Anambra was under the opposition APGA does not inhibit it from occupying the office.

Another leader of the party in the state said there is no provision in the PDP constitution that a state governed by an opposition party cannot present its members for the party's national offices.

With this development, The Guardian learnt that proponents that the PDP Acting Chairman, Alhaji Haliru Bello Mohammed  should remain in office till after the elections are gaining  more support with the party at both the South-East Caucus and the national secretariat.

A PDP leader in Ebonyi State told The Guardian yesterday that none of the four governors was interested in the South-East producing the party's chairman again.

He added that the leadership of the party in Ebonyi is seriously considering the implication of possible emergence of former President of Senate, Anyim Pius Anyim, as the possible replacement for Nwodo.

A former senator from the state, who sought anonymity, told The Guardian that the position of the political class in the South-East is that the National Vice Chairman, Dr. Haliru Bello Mohammed should continue to remain in the acting position pending the completion of the April elections, adding that the ploy is to defer the selection of a national chairman that could cause trouble within the few months he has to stay in office.

He said: 'I want to be frank with you, neither our governor nor any of the three governors want the South-East to produce Nwodo's successor. Their fear is that such a chairman could interfere in their control of the party structure and influence the appointment of ministers and ambassadors from the zone. You know the nature of the campaigns when Sam Egwu and Anyim were initially in the race; now Governor Martins Elechi does not want to prop any godfather in the state, period. Though Anyim is well suited for the post, the lack of home support, especially from his governor would stall his emergence based on recent experience.'

At a meeting in the residence of a top official of the party in Abakaliki, most of the politicians present, according to a source, considered the benefits of the state occupying such a high PDP position but decided that it would not be in the interest of the state government to support the move based on the experience of Enugu State.

'In fact, a greater percentage of those, who attended the meeting, argued that if Anyim is made the national chairman of the PDP, it would neutralise the impact of Dr. Ogbonnaya Onu's chairmanship of All Nigeria Peoples Party (ANPP). Those who support that the former Senate President be projected to replace Nwodo argued that the position would help to attract the needed amenities and attention to the developmental challenges of a rural state like Ebonyi,' the source declared, but added that most of government functionaries felt otherwise.

The source said that the body language of Elechi, shows a lack of enthusiasm on the attempt to make Anyim the national chairman of PDP, pointing out that after denying the former Senate President the opportunity to have a say on who chairs his Ivo Local Council, the governor does not want to promote 'any such agenda that could catapult Anyim to a national pedestal of authority.'

Among those allegedly opposed Ayim's elevation to the PDP chair included a leader of the party and a commissioner in Elechi's cabinet, who have eyes on the governor's seat in 2015.

According to a source, the PDP leader does not want Anyim to be in the office because it could drastically change the political equation in the Ebonyi South Senatorial Zone where he hails from.

The source noted that given his rich legislative experience at the Upper Chamber of the National Assembly, making Anyim the national chairman at this point in the history of PDP would give a sense of belonging to legislature, especially after the attempt to legislate members into National Executive Committees (NECs) of parties failed, adding that no legislator had ever been given prominent position in PDP since its inception as governors have always had their way.