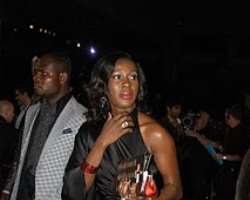 Linus Idahosa have been items for a while now and it seems their inability to get blessings from the man's family – his parent and sister is the reason they are still unmarried, engaged though. We gather that Linus family are kicking against their affair.

The couple however are not backing down. Linus threw a surprise party at Jay Jay Okocha's Club 10 on the actress' birthday.. At that event, he proposed to her – got on his kneels and asked her to marry him.

They have visited his parent but they are still unable to get a date that the parents would agree on.

The couple are however resolved to get married.