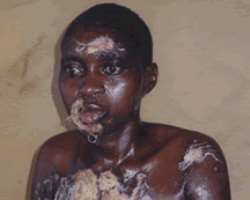 Ukamaka
In recent times, Aku community in Igbo Etiti Local Government Area of Enugu State is progressively sinking into notoriety as a result of series of violent crimes occurring in the community. Only recently, a young school drop-out believed to have acted under insane delusion beheaded his mother in a most gruesome manner and thereafter paraded the community with her head before he was over-powered by armed policemen assisted by villagers.

And only few weeks ago, a mother of three, who ekes-out a living from the retailing of recharge cards was bathed with acid, an incident which a trade unionist, Comrade Ezike Theo Nsuteigbo, described as strange and unprecedented in the history of the community.

'I don't know what has become of us here in Aku. Within six months, we are witnesses to strange occurrences here - son beheading his mother and other forms of atrocities. I attribute this to drug – Indian hemp to be precise. Our people have allowed themselves to be manipulated by Satan. Our leaders and intellectuals are keeping themselves busy with politics and paying little or no heed to pressing community issues. But I know, the Aku General Assembly, the supreme ruling body of the community will address the problem before it gets out of hands', Nzuteigbo said.

After realizing that they had hit a wrong target, an insider said that the assailants tried to also gain entry into where the victim's younger sister, Nnenna Odike, the real target was sleeping.

The source told Daily Sun that the alarm raised by Ukamaka who was writhing in pain attracted villagers to the scene, forcing the attackers to flee.

Daily Sun gathered that one of the attackers might be on a vengeance mission as a result of his unsuccessful love overtures to Nnenna.

It was revealed that one of the suspects already identified by Ukamaka had made overtures of love to Nnenna, but to no avail. He became angry and decided to deform the girl.

The Divisional Police Officer (DPO), Ogbede Police Station, Mr Kuyes has confirmed the arrest of a youth (names withheld) in connection with the acid bath.

Kuyes said the suspect has been referred to the State Police headquarters, Enugu. Speaking with Daily Sun on her hospital bed in Nuskka, Ukamaka said she was able to identify the suspect and the dress he was putting on during the nocturnal attack through the aid of a bush lantern in her room.

'I know the arrested suspect. He was one of the two boys who attacked me. 'I thank God because the acid narrowly missed my eye and the nipples of my breast', narrated Ukamaka who was in pains.

Although the medical director, Dr. Oguonu was not at the hospital at the time Daily Sun visited the hospital, a staff nurse on duty (names withheld) said that Ukamaka's was improving.

According to her, Ukamaka might not need any further surgery, but she expressed fear that some of the scars might develop cheloid, especially the wound on her lip.

How my attackers came in
The noise made by the falling of our door jolted me from sleep. It was in the dead of the night and almost everybody was asleep. There was a lantern in the room and when the door collapsed, I was able to identify one of my attackers and the dress he wore. As I was about to ask them their mission, one of them who was carrying a container flung it at me and I felt burning pains all over my body and I fell on the floor and started to shout for help. I was helpless and did not know what has happened to me. I thought I was dead. While they were breaking my younger sister's door I continued shouting for help. When some courageous relations came to our rescue, the attackers took to their heels.

Nnenna's account
I feel I was the actual target of the attack because while the invaders were trying to force my own door open, I overhead them saying, 'We have made a mistake, Ukamaka is not the person we have come for. One of them said that the attack on my sister was an error, but the room where my sister was sleeping was the room that I used to sleep. Actually, that is true, but unfortunately that night, my sister decided to sleep in my own room. I don't know what actually made her to take such a decision. It was unfortunate. I had no previous quarrel with anybody to the best of my knowledge. Some boys actually make advances to me and some wanted me to sell recharge cards to them at their price. They could not succeed in forcing my room door open before villagers came to our rescue. I thank God because they would have also poured acid on me if the people had not come to our rescue. I am a student. I sell recharge card to help my parents.

Mrs Odike, mother of the victim
I feel very bad about what the attackers of my daughter did to her. We are innocent, my children never offended anybody. They are the quiet type. What I am telling the police is to punish those who disfigured my daughter. Let them be given maximum punishment. We have no money to pay the hospital bill. I am calling on the government and good spirited individuals to come to our aid. My husband is a farmer and I am an ordinary house wife. I am begging the police to see that those who did this thing to my daughter are punished. They have ruined her,?but I thank God that he spared her eyes.

The community leader
I simply attribute what is happening in Aku in recent times to laziness. Enlightened men in Nigeria saw this early enough when they started to raise alarm about the danger of exam malpractices. This is a situation where a university graduate cannot express himself. The incessant violent crimes in Aku today can be attributed to large numbers of drop-outs roaming the town who as a result of frustration have taken to drugs.

The Aku General Assembly is trying to proffer solution to the current trend in the community regarding criminal activities, especially violent crime. Currently, the attention of our enlightened men and women here appear to be passive, but we are strategizi