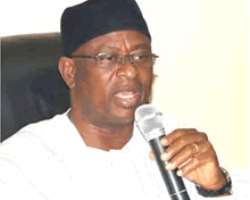 The battle line appears to have been drawn between private schools owners and the Federal Government over the latter's directive that both public and private schools remain closed throughout the voters registration exercise. Originally, meant to last till February 4, the date was later shifted to January 31.

But the National Association of Private Proprietors of Schools (NAPPS) is taking none of that. Consequently, it has directed its members to ignore the directive and reopen their classrooms for its teeming pupils and staff.

The statement issued by the National President of NAPPS, Dr. Saidu Mijinyawa, described the decision as arbitrary, because none of the private schools are involved in the INEC voters 'registration exercise.

He noted that the directive was issued in total disregard to the constitutional provisions and gross insensitivity to members huge investment. He disclosed that it jeopardizes its contractual relationship with stakeholders that include parents, pupils and staff.

To show their displeasure, NAPPS directed its members nationwide to ignore the directive and fulfill 'their obligations to the society by opening the gates of their schools to parents and children as earlier scheduled on January 10 and asked the government and INEC to look for alternative registration venues.'

After the NAPPS directive to its members on Monday, January 10 to reopen for business, Daily Sun monitored the situation at Apapa, Kirikiri, Ikotun, Alimosho, Isolo, Abule Egba, Ikeja,  Mushin, Surulere,  Lagos Island and Oshodi while reports from Ogun State indicate that the schools opened for classes. As at the time of filling this report, some of the proprietors/proprietresses of schools promised to open on January 17. To this end, they said, they have put their teachers on notice. Faulting the directive by the Federal Government, they noted that the government does not foot the bill of running the schools nor do they benefit from Education Trust Fund and Universal Basic Education funds.

In the light of the directive from NAPPS to its members to throw their doors open for academic activities and the support from parents and stakeholders against the government decision, a concerned parent, Chief Timothy Atanda told Daily Sun that many schools would ignore the order and open their doors for pupils and teachers. 'I want them to disregard the directive. Education is on the concurrent list and government does not give them subvention, so why must they interfere in the affairs of the private schools?'

In fact, the Lagos State chairperson of the National Association of Proprietors of Private Schools (NAPPS), Mrs. Elizabeth Kufeji, led others member to Alausa to protest the decision of President Jonathan but they did not meet Governor Babatunde Fashola. Notwithstanding his absence, the schools owners passed on their message to government officials.

'There is no good reason why schools in the country should be closed,' she insisted. 'This is not the first time we are organizing voters' registration in Nigeria. The federal government did not inform private schools owners before announcing their decision.'

After the protest at Alausa and NAPPS reactions, some proprietors/proprietress opened for business but their pupils came in mufti to schools while the teachers resumed for duty. But the population of the children was nothing to write home about. Majority of the recalcitrant schools are located on the streets.

The slight change in the date of resumption notwithstanding, confusion and criticisms have continued to trail the Federal government's decision. The private schools are affected, apart from INEC use of public schools across the country to train Assistant Registration Officers (NYSC members) and other categories of ad-hoc staff for the forthcoming voters registration exercise.

Originally, both public and private schools nationwide were billed to resume from Christmas vacation. But four days to the date, the government through the Director of Basic and Secondary Education at the Ministry of Education, Abuja, Alhaji G.Y. Bello and the Minister of State for Education, Olorogun Kenneth Gbagi, issued a statement postponing it to February 4 and later to January 31.

The government decision made known on Thursday 6, 2011, caught many proprietors/proprietress and parents unawares, as they had prepared for the resumption of their schools and wards for academic activities on Monday, January 10.

Investigations by Daily Sun revealed that the Federal Government did not consult the state governments or the Federal Ministry of Education, the states ministries of education, until reactions began to trail the decision.  First to fire the salvo was the human rights lawyer, Mr. Femi Falana, at a function held in honour of a veteran labour leader. He faulted the decision of President Jonathan to direct schools nationwide closed till after voters registration exercise. Speaking further, he argued that education is on the concurrent list and thus the federal government cannot dictate to states and private school owners how to run their schools.

Falana went a step further to ask the proprietors/proprietresses of private schools nationwide to dare the federal government by throwing its doors open to pupils for the current academic activities and threatened to sue the government if the directive is not reversed.

The Vice President, Nigeria Labour Congress (NLC), Mr. Issa Aremu also condemned the government's decision. Noting that it was not in the best interest of the nation's educational system, Aremu remarked: 'I think the decision to close schools is completely wrong; schools are not registration premises, schools are where our children must be trained, where the future nurses, doctors and engineers are trained.'

The National Parents Teachers Association of Nigeria (NAPTAN) through its National Coordinator, Alhaji Babs Animashaun picked holes in the Federal Government's directive stopping schools from reopening for another academic activity. It noted that the decision would disrupt the academic calendar and that the voters' registration exercise can go on without necessarily affecting the education of pupils. He said NAPTAN frowns at any act of voters' registration that would disrupt the school system and appealed to the federal government to save the poor masses by not disrupting the education of the kids who have been on holiday since December.

Reacting to the directive, the Lagos State Government observed that the right to vote should not jeopardize the right to full and qualitative education. But all the same, it went ahead and appealed to parents, guardians, teachers and students to bear with the situation before announcing that the postponement of resumption of schools had been moved from January 10 to 31.

According to the Permanent Secretary, Ministry of Education, Alausa, Mrs. Omolara Erogbogbo, the government's position is predicated on the fact that not less than 265 schools would be involved in the exercise as proposed by INEC and 'we feel that any distraction the exercise may cause during school period will not be in the best interest of the students and other stakeholders in the education sector'.

Some parents complained to Daily Sun that additional three weeks was too much for their kids to stay at home. More so, they would pay school fees covering the academic calendar. They lamented that having resumed work after a long vacation, the government directive came suddenly making it difficult for them to provide alternative safe places to keep their children.

Some parents who spoke to Daily Sun decried the decision by lamenting that they would now have to pay school fees for lecture/class work not done. Mrs. Titilayo Olatunji, Mr. Kenneth Nwachukwu and Alhaji Kola Adebisi took a swipe at the government for trying to keep their wards at home for another three weeks while their counterparts in the other countries are in school.