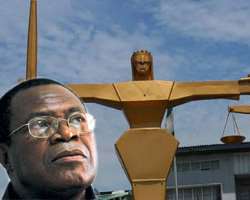 The move was apace last night even as the embattled National Chairman was himself banking on a reprieve which could offer him a soft landing. The decision to remove Nwodo as National Chairman was agreed at a consultation on Sunday night during which his macabre intervention into the proceedings of the party's national convention, Thursday evening, was reviewed in strong negatives.

With Nwodo's hold on the leadership hanging on a knife edge, his antagonists including members of the National Working Committee, NWC, governors, particularly his home governor, Sullivan Chime, were sharpening the arrows against him with the articulation of his alleged impersonal dealing with party officials and members.

The chairman was himself banking on a last minute intervention from President Jonathan at the end of a consultation meeting in the Presidential Villa. The consultation with party chieftains and stakeholders was ongoing as at last night leaving permutations on the prospects of Nwodo remaining in office in the balance.

Quarrel with Gov Chime
Dr. Okwesileze Nwodo
Vanguard gathered last night that Nwodo's problems have spread beyond his quarrell with Governor Chime of Enugu State over control of the State chapter of the party into personality problems with members of the NWC which climaxed with what party officials said yesterday was his strange appearance at the national convention.

Nwodo, it was learnt had been implored by NWC members prior to last Thursday's national convention not to make an appearance at the convention on account of the Enugu High Court order which had barred him from parading himself as the national chairman of the party.

But Nwodo's sudden appearance and his attempt to take charge of the convention was read as an act of sabotage suggestive of a deliberate attempt at upturning the progress of the convention and possibly putting the nomination of the President in legal jeopardy.

Following the convention, party chieftains on Sunday night at a consultative meeting reportedly resolved to move against Nwodo whose seven month stewardship of the party has itself been characterized with internal disharmony both at the NWC and in dealings between the national executive and the state chapters of the party.

Grievances against Nwodo
Indeed, part of the grievance against Nwodo, Vanguard learnt, yesterday, is his unilateral dealing of issues which party executives said had severally put the party in bad light.

The Southeast executive had on Sunday passed a resolution calling on Nwodo to be removed from office.

A state party chairman on his way back to Abuja for the emergency meeting said yesterday: 'If his people say they do not want him, then what can we do? His problem started principally from home but it has spread to a national problem as he equally does not relate well with members of the NWC and even with us State chairmen. He does not seem to regard us well too.'

A prominent party member from Enugu was equally adamant saying that Nwodo had messed up the party saying he would equally canvass for the removal of the national chairman at today's NEC meeting.

Vanguard learnt that Nwodo's problems were well articulated at the Sunday meeting to the point that the national chairman may have become a serious liability to the party and its presidential candidate.

Besides, party chieftains are hoping to use the Nwodo faux pas as a channel to redress the seeming imbalance in the polity in a way to allow the position  of National Chairman rezoned to the North. The acting National Chairman and substantive Deputy National Chairman, Dr. Bello Haliru Mohammed, is from the Northwest, a part of the country where the President got the least of his votes during the last party convention.

Resolution of  S-East caucus
It was being speculated last night that unless the President intervenes, today's NEC could adopt the resolution of the Southeast caucus passing a vote of no confidence on Nwodo.

Part of the communiquÃ© which was signed by the zonal secretary, Mr. Vincent Okpareke, read: 'We hereby pass a vote of no confidence on Dr. Nwodo and ask him to resign his chairmanship of the party, and that if he fails the National Executive Committee of our party should expel him from the party.

'We condemn without reservation the ignoble conduct of the suspended National Chairman of our party, Dr. Nwodo, who by flagrantly disregarding the party's constitution, disobeyed a valid court order by showing up at the special convention and lying to the convention that the order had been vacated, brought shame and embarrassment to the party and therefore us, his kinsmen and women.

'The zone apologises to the country for this calamitous behaviour of Dr. Nwodo in deliberately and wilfully attempting to void the special convention by not only showing up but forcibly taking over the officiating at the convention before he was overpowered and subdued.'

The communiquÃ© appealed to PDP members in the country 'who have deserted the party especially National Assembly members and party stalwarts in Oyo, Osun, Plateau, Anambra, Adamawa and other states, since Dr. Nwodo unleashed his high_handedness on nearly every state chapter of the party, seeking to hand_pick candidates without going through the process of primaries to return to the party.'

The communiquÃ© equally jettisoned Nwodo, their son and declared support for the acting National Chairman, Alhaji Mohammed Bello to run the affairs of the party pending the emergence of another chairman from the South East acceptable to the party members.

Overwhelming endorsement
They restated their overwhelming endorsement of President Jonathan's candidacy and 'our firm belief that he with the Vice President, His Excellency, Architect Namadi Sambo, possess the experience, education and sufficient knowledge of Nigeria's problems to be able to pilot the country to the next level of her development.'

Reacting to the meeting, the embattled National Chairman, Dr. Okwesilieze Nwodo said that the South East zone meeting was not properly constituted.

Nwodo who spoke through his Special Assistant, Media, Ike Abonyi, Nwodo said: 'They didn't call the meeting properly. How many governors were there? How many senators and House of Representative members were there? It was not attended by any governor except Sullivan Chime.

'Their meeting is political. It has no legal implications and they don't have the powers to remove the national chairman.'

Meanwhile, the apex Igbo socio_cultural Organisation, Ohanaeze Ndigbo, yesterday, initiated moves to resolve the crisis that has pitted some Igbo political leaders against Dr. Okwesilieze Nwodo leading to the demand for his removal from office.

Character assassination
Some stakeholders of PDP in the South East Zone also condemned the attempt by a few individuals in the zone to assassinate the character of the PDP National Chairman by mounting campaign of calumny against him just as they accused those who lost their bid to secure the party's ticket as responsible for the plot to unseat Dr. Nwodo.

Governor Sullivan Chime of Enugu State, deputy Senate president, Ike Ekweremadu, Chief Olisa Metu who is the national vice chairman of the party in the South East as well as two deputy governors were among the leaders who met in Enugu and passed a vote of no confidence on Nwodo, Sunday, saying he flouted the Enugu High Court order made on the eve of the national convention of the PDP,  restraining him from operating as the national chairman of the party .

President_General of Ohanaeze, Ambassador Ralph Uwechue who spoke on the move against Nwodo by some leaders of PDP in the South East zone,  said:  'Already, we are trying to reach out to certain persons involved in this latest crisis to see how we resolve it.

'We need unity of Ndigbo in all ramifications and certainly, what has happened now does not portray that we are united. We don't have the details yet of what happened on Sunday but the effect has shown that we have a problem militating against our unity and it is not good that this is happening.'

Expressing regrets over the development, Uwechue  noted that 'any sign of disunity that is made public concerning Ndigbo is not good news. We would want such matters concerning our people to be settled within our fold and not to be treated publicly like this one.

'We are not taking sides but this is creating bad impression about our people. It shows there is open disunity.

And it is not good for those involved and Ndigbo generally, hence, we want a situation where a level of understanding should be reached on this matter.'

It was gathered that Uwechue had been held up in consultations on the matter for the greater part of  yesterday and only took a short break from his meetings to speak to reporters who were waiting for the outcome of his talks with the parties.

Meanwhile, South East stakeholders of PDP said in a statement issued in Enugu that the call on the National Working Committee of the party by a section of the zonal executive committee to remove Nwodo from office was uncalled for and urged the NWC to disregard it.

Zonal executive committee statement
In the statement signed by nine members of the Zonal  Executive Committee of the party including Barrister Okonkwo Emmanuel, Chief Pius Onwe, Hon. Uzo Okere, Chief Mrs Eugenia Ewereuzo, Chief Mrs. E.O. Nwankwu, Barrister John Aneke, Hon. Ikechukwu Mba, Dr. Eugene Mbamalu, Hon. Agbo Egenti and Mrs. Agnes Egbo, the stakeholders said: 'We wish to state that this is not the decision of the entire Zonal Executive Committee, but that of some individuals from the zone who lost out in the recently concluded party primaries with themselves or their surrogates who failed to make it.

'We also advice that if they feel that the National Chairman erred in any form, he should be given fair hearing as provided by the constitution of our great party, PDP instead of washing our dirty lines on the pages of newspapers. We also, therefore, call on the NWC of our great party to disregard this unwarranted call for the removal of Dr. Okwesilieze Nwodo in the interest of peace and oneness in the party.  The discerning public should also ignore this call.

'Finally, we wish to state further that if they continue with their evil plans, we will be left with no option than to mobilize all true Igbo sons and daughters to resist this act of intimidation and political hooliganism.'