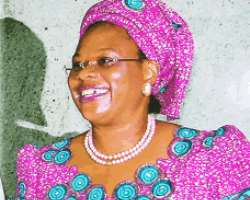 The recent intention to join the Senatorial race in Anambra State by the erstwhile Information and Communication Minister, Prof (Mrs.) Dora Akunyili, was received across the country with aplomb and applause. The reason for this is not far to fetch.

Prof Akunyili has portrayed herself as both an academic and political Amazon and she has beheld the country's political firmament as a colossus and an independent-minded patriot whose objective is how to make life more meaningful and more abundant for the vast generality of Nigerians especially those who exist below the poverty divide.

A professor of Pharmacy, Dr. Akunyili came to national limelight when she held sway as Nigeria's drug czar. She was the halius woman at National Agency for Food, Drug and Administration and Control (NFDAC). Prior to her tenure, drug merchants had held the country by her jugular as they had a field-day. It was as if there was no law guarding against importation of fake and adulterated drugs, food, cosmetics and the like.

The business of fake drugs was booming. Many drug manufacturing companies in Nigeria were only busy churning out fake and adulterated drugs which they pass off and sell to unsuspecting consumers. Others were in the business of partnership with foreign pharmaceutical agencies who bring in sub-standard, fake and adulterated drugs, goods, cosmetics and the like. These fake products usually found their way into the markets in Nigeria where they are purchased and used by helpless consumers.

The consequence was obvious; there were cases of untimely deaths, intractable damages to vital organs of the body and ceaseless illnesses. These unwholesome drugs, foods and cosmetics sent many Nigerians to their untimely graves.

There were danger signals in the health sector. Government's efforts to checkmate the nefarious and unpatriotic activities of the peddlers of these fake and dangerous products proved abortive. In fact, the more the government fought these satanic elements, the more they resisted the fight and they appeared combative, aggressive, unrelenting and dogged in their struggle to entrench fake and adulterated drugs, good and products in the country.

At a time these agents of doom actually had an upper hand in the game of wits with constituted authority. It seemed as if they had sponsors, mentors and godfathers even in official circles as all legislations put in place to rein in on them were worth precious little. In those days, it was even difficult to arraign any of the illegal drug and food dealers in court.

This was the scenario when Prof. Akunyili mounted the saddle as the Director-General of NAFDAC. She reorganized the agency, gave it bite and character. She was a sermon to her subordinates. Dora was, like Caesar's wife, above board. She was perfect, incorruptible, unbending and strict.

She stood for Nigeria and Nigerians. She made sure that her workers did their work in line with the law, rules and regulations of NAFDAC. The drug barons and their foot solders were battled to a standstill. Many fake and adulterated products making their way into the country were intercepted and the brains behind the activities, brought to book. Operatives of NAFDAC were everywhere in the airports, sea ports and borders. It was under Dora's tenure as NAFDAC boss that the practice of embossing NAFDAC number and imprimatur on certified products was commenced.

Drug barons and their collaborators found a veritable threat to their thriving and lucrative business in her. Akunyili was threatened several times. Attempts were made on her life, efforts were made to corrupt her. She faced uncountable temptations and trials. In all, she emerged triumphant and victorious. Her head was truly bloodied, but it remained unbowed. Dora was strong, bold, courageous, and daring, even to a fault, all for the love of our great country and her citizenry. She risked her job, her life, her health, her family and relations in order to serve Nigeria by eliminating the ugly practice of dumping fake, adulterated and bad drugs, foods, narcotics and cosmetics in Nigeria.

She took on pharmaceutical factories and other illicit drug and food-manufacturing outlets in Nigeria head-on. She looked all of them in the face and spared none of them whose products were less than the standard recognized and ordered by NAFDAC.

In this worthy enterprise, it meant practically nothing to Dora that the illegal dealer is her kinsman or woman for her, the law is there and must be obeyed. She even fought her Igbo kith and kin, who were interiors for illegal deals in fake and adulterated products. She dared all of them and unleashed her men into all their hideouts in the South-East. During Dora's tenure as NAFDAC queen, the frequency of raids in markets and other hideouts in search of illegal drug and food outlets and spots was remarkable.

Perhaps, on account of her good works in NAFDAC, Dora was appointed by the late President Yar'Adua's as Information Minister. On Yar'Adua's demise, President Goodluck Jonathan found Akunyili fit, proper and qualified to earn re-appointment into the same ministry. In the information Ministry, Dora continued to show the stuff she was made of. She managed the information portfolio with familiar excellence and panache. She worked harmoniously with her subordinates and she used her credit and personal stuff to sell government policies to the people. She helped the country so much in her dire and trying moments. The country tapped so much from her international stature and goodwill.

Dora came to Nigeria's defence during the Mutallab incident in the United States. When some unpatriotic Nigerians were playing politics and holding the whole country to ransom with Yar'Adua's ill-health, Dora spoke her mind, hit the hammer on the nail and asked Yar'Adua to resign. For this, she received diatribe and invectives in both the print and electronic media. But Dora was not perturbed. She had unburdened herself by speaking the truth in the interest of the country.

It was perhaps against the backdrop of her pedigree and worthy achievements in office that Dora's intention to aspire to the Senate on the platform of APGA was greeted warmly and approvingly all over the country. The need for a woman to stand up and be counted in Nigeria's political terrain cannot be over-emphasized.

A lot of women had been held back in the past by cultural and social considerations from taking part in politics. Politics was branded a dirty game in the past which should have no place for decent women. This notion is untrue, unsupportable, untenable and merely designed by some male chauvinists to continue to relegate the women to the background in the political scheme of things. Many female politicians have given a lie to this hypothesis and now is the time for women to hold their own and contribute their quota to national development. Happily , the Akunyilis' Tallans, Ettes, Njezes, Dame Patience Jonathans, Ezekwesilis, Okojjo-Iwealas and others have shown that women can be trusted to deliver the good.

The time is now to give vent to the creed of dame Patience Jonathan's Women Initiative that women should be given the opportunity to participate in governance. Prof Akunyili's declaration of interest to go to the Senate under APGA is a welcome development. She needs the support of all and sundry in this worthy task. Men, women, youths and all stakeholders owe it a duty to support and rally behind this great patriot, this great lover of Nigeria and Nigerians in her quest to serve the fatherland in another capacity as a senator.

Dr. Akunyili is eminently qualified to occupy a seat in the senate. The senate is the anguish upper chamber of the National Assembly. Its members should be men and women of integrity who have distinguished themselves in their chosen careers and who are thus occupied by only altruistic and nationalistic considerations in all they do.

A senator must be well-educated, broad-minded and nationalistic in outlook. He must have a track-record of excellent performance in previous offices occupied and he must be one who knows the country very well. Our ideal senator should be a statesman who has it all and whose burning desire is to bequeath to posterity a nation with a strong and resilient economy devoid of inflationary trend, a Nigeria with employment opportunities for the youths, a Nigeria where facilities are put in place and a nation with a bright and prosperous future.

The senator of the next senate must be one who seeks what to do for Nigeria and not what Nigeria can do for him. Dora fits this bill perfectly well. Nigeria is blessed to have Dora Akunyili, Anambra State is blessed to have Dora. Awka Central Senatorial Zone is blessed to have Akunyili. Dora deserves our support and vote to enable her to go to the senate to continue the good work she started in NAFDAC. The task of taking Nigeria to the next level is a herculean task. It should not start and end with recitation of platitudes. It requires committed men and women who have the political will to translate dreams to reality.

Prof. Akunyili is one of such committed and selfless Nigerians who have the will, track-record, capability and zeal to take Nigeria to the next level and to speed up her earnest desire to join the community of industrialized and economically independent nations.

Go o, Dora. Do it once more for Nigerians. Your name shall be written in golden letters at the appropriate time. Trudge on, dependable daughter of Nigeria. The masses of Nigeria are solidly behind you. You have been behind them before. You staked even your very life to ensure that they live. This is pay-back time. The prayers and good wishes of Nigerians are your portion.

March on to victory and help, once more, to fit Nigeria.

•Okpala is a commentator on national issues.