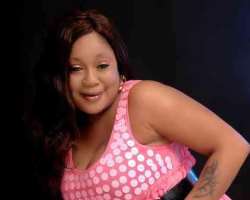 Yoruba movie actress Tayo Odueke popularly known as Sikiratu Sindodo has been ill for over four months. She was admitted and been taken care of at a private ward in Lagos University Teaching Hosiptal where she is undergoing treatment for what doctor can't seem to rightly diagnose. The fair complexioned and bubbly actress is said to have lost her weight extremely with very darkened skin and movement of her arms and leg restricted.

The actress is also finding it hard to make use of the toilet, a source informs.

She was apparently not keeping a low profile as assume by media reports following her absence on the scene. Doctors however insist she is suffering from chronic ulcer and liver problem. After months of trying conventional medicine and failing, her family his calling on well wishers to pray for the actress. Her family also decided to seek spiritual help as they invited two spiritualist to see her at her ward for a solution. Both spiritualist insist it is a spiritual attack which is caused by self misfortune.

Expenses on treatment for her ailment is on steady increase. Speculations have been raised about the self misfortune spiritualist informed about. The actress killed a one year old baby in 2009 in an accident but the family of the baby didn't press charges after she pleaded and her affair with NURTW Boss where she is informed to have turned arrogant and was offensive to every other women in the NURTW boss' life – NURTW Boss MC Oluomo has four wives. A week after her accident where she killed the baby, she was spotted partying allegedly showing no remorse at the death she caused – it is speculated that she is been attacked by family of the one year old baby who have really not forgiven her or one of the women She is reported to have fought with to win the affection of her man.

NFC gather that, she have turned to the church and praying hard for her recovery.