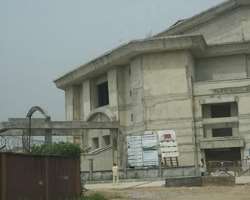 After running the church for many years without a permanent site, Head Pastor of House On The Rock, Paul Adefarasin is set move into the new headquarters of the Church called Millennium Temple.

The new church, built along the Lekki-Epe express way (close to Liberty hall) is said to have cost over N1billion naira to build. Adefarasin confirmed this to his congregation a few Sundays ago and promised a move to the new permanent site in a few months.