AKALA GETS PDP TICKET AS OPPOSITION FAILS TO STOP PRIMARIES 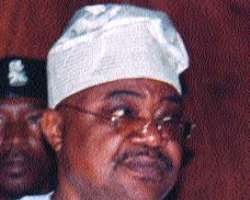 • Akala
Embattled Governor Adebayo Alao-Akala yesterday overcame a major hurdle in his re-election bid, as he secured the Peoples Democratic Party (PDP) ticket to run for a second term.

The party's governorship primary election which held amidst tight security at the mainbowl of the Obafemi Awolowo Stadium, Ibadan, was an easy ride for the governor, as his three main challengers, former special duties minister, Elder Wole Oyelese, Chief Yekini Adeojo and former deputy governor in the state, Hazeem Gbolarumi, and their supporters boycotted the exercise.

The governor polled 1,239 votes as against the lone vote cast for Oyelese, who, besides Alao Akala, was the only candidate cleared for the election by the national screening committee of the party. 16 votes were voided in the election in which 1,256 accredited delegates from the 33 local governments in the state participated.

Alao-Akala, who had faced stiff opposition in his re-election bid mainly from a faction of the party led by Senator Lekan Balogun, Adeojo and detained Senate Leader, Senator Teslim Folarin, among others, was full of sweet victory songs after the chairman of the five-man electoral panel from the Abuja headquarters of the PDP, Alhaji Buhari Bala, announced the election verdict.

'I have conquered the opponents within. What remains is to prepare for the opponents outside and I'm sure I'll defeat them in the general elections,' he told a battery of reporters, amidst cheers from his crowd of supporters shortly before boarding his official Sports Utility Vehicle (SUV) and being driven off.

Moves to stop the shadow election by the Oyelese group failed as Daily Sun learnt that the judge, who was to hear a motion for interlocutory injunction filed at the Federal High Court, on Tuesday, seeking to restrain the conduct of the exercise, could not, because he was hospitalised. The governor's special adviser on public communication, Dotun Oyelade, quoting the Electoral Act, said the courts were not empowered to stop party primaries. But, an aide to the former minister and governorship aspirant told Daily Sun that the action would still be pursued, as the major prayers of the applicants/claimants were for the PDP and the Independent National Electoral Commission (INEC) not to recognise the result of the primary election, on the ground that it was 'factional and illegal, based on an inconclusive congress.'

He vowed that the governor's nomination would be upturned in court as the purported delegates at the primary election were not validly elected. Yesterday's exercise was supervised by the Bala team, including Alhaji Ibrahim Babali (Secretary), Mrs. Polycarp Essien, Mr. Bello Femi and Chief Ayo Aluko Oluokun. It was witnessed by a two-man INEC team of observers, led by Mr. Evalobi; his colleague is Mr. E. Muhammadu. At the event, besides the governor, were: his deputy Taofeek Arapaja, Chief Richard Akinjide (SAN), members of the National Assembly from the state, commissioners, interim chairmen of the 33 local governments areas and state lawmakers. There were two other independent observers, namely Adeloun Adeose and Mba Chinyere. Leader of the PDP national electoral panel, Bala, expressed satisfaction with the election, and commended the conduct of the delegates as 'peaceful and impressive.'

There was heavy security presence at the venue with armed policemen and Nigerian Civil Defence Corps officers, frisking delegates and journalists before being allowed entry into the stadium. Vehicles were barred from the vicinity, except for the governor's convoy and those carrying electoral materials. An Armoured Personnel Carrier (APC) was stationed at the entrance of the stadium.