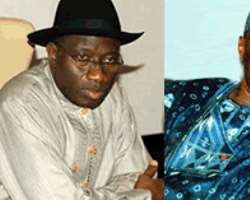 Jonathan & Atiku
Even as the contentious zoning arrangement in the Peoples Democratic Party [PDP], remains an issue few days to its National Convention that will produce the party presidential candidate, the party stalwarts are set for the event scheduled to hold at Eagles Square on Thursday.

Various factors will determine who flies the PDP ticket among the four aspirants in the race. Two of the aspirants —Sarah Jibril and Alhaji Sani Aminu Dutsinma are perceived as dark horses while the incumbent President, Dr Goodluck Jonathan and former Vice-President, Alhaji Atiku Abubakar, are seen as the real contenders.

Sani Aminu Dutsinma from Katsina State is a relatively unknown member of the party, but for the litigations orchestrated by him to contest what he called the attempt by the PDP National Working Committee, [NWC] to jettison the zoning arrangement, as enshrined in Article 7.2[c] of the party constitution.

The contentious section reads:
'…in pursuance of the principle of equity, justice and fairness, the party shall adhere to the policy of rotation and zoning of party and public elective offices and it shall be enforced by the appropriate executive committee at all levels.''

Giving his judgment, the Justice of the Federal High Court, at the Federal Capital Territory, Abuja, Justice Lawal Gummi had dismissed the case, as he noted that zoning is subsisting in the PDP Constitution, but not justiciable, since it is an internal affair of the party.

Dutsinma had since proceeded to the Court of Appeal to challenge the judgment.

But last Thursday at a news conference, the presidential aspirant informed journalists that he had filed another suit asking the Independent National Electoral Commission [INEC], to compel PDP to respect the zoning arrangement in its constitution.

Dutsima in a suit filed before Justice Kafarati of Abuja Judicial Division Court 111 demanded that INEC should make the PDP to comply with the provision of Article 7.2 of its constitution that stipulates rotational presidency and zoning of political and party positions.

The Presidential aspirant said his latest legal action was to consolidate an earlier judgment delivered by Justice Lawal H. Gummi that ruled that section 7.2 of the PDP recognizes the principle of zoning and rotation of power..

'Our main request is an order by the honourable court that the Independent National Electoral Commission directs the Peoples Democratic Party to comply with the provision of Article 7.2 of its constitution and carry out the process for nomination of the candidates and the conduct of the primary elections for the office of the President through the implementation of its existing zoning and rotation principle.'

In the alternative, Dutsima urged the court to direct the INEC to require from the PDP exact manner and duration as well as details of its implementation of Article 7.2 of its Constitution before the conduct of any primary election for the office of the President.

According to him, his decision to follow judicial course to resolve the political crises in the PDP was in the best interest of the country. The presidential aspirant maintained that no argument could invalidate the fact that rotation and zoning remain the best solution to the nation's political problems.

'Regardless of all excuses in order to jettison the zoning and rotational arrangements, we must, with all honesty, understand that it is unwise, unjust, unfair, illegal and may be chaotic and disastrous for our nation.'

While he proclaims to be in the race, Dutsinma has no visible political structure.

Sarah Jibril: She is the only female presidential aspirant in the party. This would be her fifth attempt.

She first came into political limelight when in 1990 during the aborted Third Republic, she contested for the presidential ticket of the defunct Social Democratic Party, [PDP] held in Jos, where the late business mogul, Chief Moshood Abiola won and emerged as the SDP candidate.

From the inception of the current political dispensation in 1999 till date, Jibril had attempted the presidency first in PDP in 1999, before forming the Progressive Grand Alliance, [PAC] to contest the presidential election in 2003.

In 2007, she returned to the PDP and at the presidential primary of the party, held at Eagles Square, Abuja, she garnered four votes. The late president, Umaru Yar'Adua later emerged as the party candidate.

A veteran in the presidential race, she is not worried by the ambition of the incumbent President Jonathan and the ubiquitous former Vice- President, Atiku Abubakar as she continues to declare that she is prepared to confront any obstacle on her way.

Jibril had said the country needs a president, '' that will facilitate and ensure that money/funds and services get to the villages by partnering to reduce people scrambling for money/funds in Abuja''.

She is not bothered by the influence of the overbearing PDP governors who will deliver the delegates, as she told newsmen last year that the governors are paper weight.

Other candidates who conceded to the NPLF choice of Abubakar were former military president, General Ibrahim Babangida; former National Security Adviser, [NSA], General Aliyu Gusau and the Kwara State Governor, Dr Bukola Saraki. Since his adoption by the group, the former vice-President has been galvanizing support for his ambition, ahead of the party national convention.

While he is of the conviction that he would beat the sitting president, to pick the party presidential ticket, Atiku, in a chat with senior editors last year had given indication that his attempt for 2011 presidency might not be his last.

Dr Goodluck Jonathan: Before his formal declaration of interest to partake in the race for his party presidential ticket, his ambition had courted controversy and division within the party—the PDP had since been thrown into the pro-zoning and anti-zoning divide, while in certain quarters it has been given a dangerous colouration of North/South divide.

While some stalwarts of the party insist that the zoning arrangement entrenched in the party should be respected and but Jonathan should not contest but allow the North to produce the party presidential candidate, the anti-zoning group continue to repulse the submission, while proclaiming that zoning had been observed in the breach.

There are also a few party chieftains, like the Jigawa State Governor, Sule Lamido, who are of the view that denying President Jonathan the party ticket would amount to a pass-of-no-confidence in the PDP Federal Government and the party.

But as the leading aspirants continue to appeal to delegates, certain factors and forces would determine who picks the party ticket.

PDP Governors Forum: It is one platform the party leadership: the PDP National Working Committee and the Board of Trustees love to hate, but it continues to hold the ace in the party. The PDP Governors Forum had resisted forms in the party and continue to decides who gets, what and how in their respective states, while proclaiming themselves as party leaders in their respective states.

Since Jonathan emergence as President, the only battle the governors seem to have lost was the removal of Prince Vincent Ogbulafor as the party national chairman.

The PDP Reform Forum was killed at inception, attempt to take the control of the party from governors by the party national chairman, Dr Okwesilizie Nwodo, through e-registration was equally repulsed. They also put up resistance to the PDP NWC antics to reverse the order of party primary to give precedence to the presidential primary, before the governorship. The governors won.

For the governors, it has been serious horse-trading to guarantee their interest and the leading aspirants—both Atiku Abubakar and President Jonathan have been courting the governors.

After the 55th National Executive Committee, [NEC] meeting where the PDP NWC and President Goodluck Jonathan conceded to the governors to have their primary before the party national convention, the governors made a declaration to fulfill their own side of the deal.

Twenty PDP governors inside the party national secretariat announced their endorsement of President Jonathan for the 2011 presidential ticket of the party.

Katsina State Governor, Ibrahim Shema, who announced the communiquÃ© on behalf of his colleagues after the party NEC disclosed that the governors resolved to support President Jonathan for fresh ticket. '' Having deliberated extensively on democratic practices the world over, we observed as follows: Democratic systems all over the world recognize the principle of incumbency and continuity; Entrenched democratic culture persistent in democratic culture and our constitution entitles our president which the PDP governors support;

'We also recognize the Yar'Adua/ Jonathan ticket and therefore encourage President Jonathan to contest the 2011 election as the PDP presidential candidate for a period of four years only''.

In spite of the open pledge, the Jonathan camp is still worried that the governors might do a tragic recant at Eagles Square with their delegates votes.

The G- 84: It is the coalition of PDP chairmen and secretaries, another power block in the party. They will lead the states delegates to the party convention and they always work in concert with the PDP governors.

PDP National Working Committee, Board of Trustees: The PDP NWC, and the BoT should normatively, call the shots in the party, but they trail behind the governors. Attempt by the PDP NWC and the BoT to make members of the National Assembly on the party platform automatic members of the PDP National Executive Committee generated public outcry and indignation from party faithful and they had to yield ground. It will be naÃ¯ve to assume that the aspirant who enjoys the support of these two party structures would lose at the convention.

But Daily Sun investigation however revealed that the PDP NWC is polarized. Only the party national chairman, Dr Nwodo is perceived as Jonathan's man.

The North/South divide: In the choice of a presidential candidate for the party that prides itself as the largest political party in Africa, primordial sentiment would be a factor. Atiku, albeit, a bridge builder is the candidate of the pro-zoning divide in the North which holds tenaciously to the belief that a Jonathan presidency would have short-changed the North which they claim is entitled to two terms presidency according to their interpretation of the zoning arrangement in the PDP constitution.

President Jonathan before his formal declaration was proclaimed as the candidate of the South-South for the 2011 presidency, by the elders from the zone, at their forum held last year in Rivers State.

Former Chairman of the PDP BoT, Chief Tony Annenih had been alleged to have threatened party chieftains from the south-south not to romance Alhaji Atiku Abubakar. It is not unlikely that ethnic factor would play a role in who picks the PDP presidential ticket.