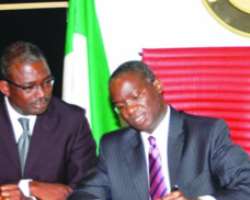 Three times the staff unions of Lagos State tertiary institutions met last year with Governor Babatunde Fashola to deliberate on the issues in contention but thrice their discussion ended in a deadlock until the December 31, 2010 truce, brokered by Dr. Dipo Fashina, former President of the Academic Staff Union of Universities (ASUU), led to the suspension of the four-month-old strike.

Following the failure of the government to get the staff unions in the state's tertiary institutions back to work, Governor Fashola, Daily Sun learnt, contacted the former ASUU boss to mediate in the face-off that led to the closure and disruption of academic calendar in the four state-owned institutions: Lagos State University (LASU), Lagos State Polytechnic (LASPOTECH), Adeniran Ogunsanya College of Education (AOCOED), Ijanikin and Michael Otedola College of Primary Education (MOCPED).

Before the crucial meeting, both parties had stuck to their guns, with Governor Fashola insisting that the state cannot pay the various agreements signed by the national bodies of the unions with the Federal Government, while the unions' leaders insisted that the state has the resources to meet their demands much so with N18 billion being realized monthly from Internally Generated Revenue (IGR). Noting that poorer states have implemented the demands, they insisted on continuing with the strike until their demands were met. Thus the strike lingered on until December 31 when the issues in contention were resolved and the strike suspended on Tuesday and Wednesday, January 4 and 5, 2011.

On arrival, the former ASUU boss immediately went into a close-door meeting with Governor Fashola after which the union leaders were invited and the deal was sealed after some horse-trading. Daily Sun gathered that the decision to resolve the industrial crisis in the four state-owned tertiary institutions by the state government was to avert the impending hammer of the National Universities Commission (NUC) and the Joint Admissions and Matriculation Board (JAMB) which recently barred the South-East universities from Universal Tertiary Matriculation Examination (UTME) this year, due to the six month-old strike embarked upon by their staff unions over similar demands.

Aside Governor Fashola, the Head of Service (Lagos), Prince Adesegun Ogunlewe and Commissioner for Establishment, Mr. Jide Sanwo-Olu were also said to be present at the make-or-mar meeting. Dr. Fashina and Prof. Ajisegiri had had separate discussion with the union leaders after which the agreement was signed between the state government and the unions. Ogunlewe signed for the government while each of the union leaders endorsed the resolutions reached.

Among others, the resolutions include the state-government's acceptance to implement the ASUU,SSANU, NASU,NAAT/ FG agreement of 2009, the financial aspect which would start in January 2011 and the government's acceptance to increase LASU subvention by 25 per cent (while the IGR of the university would complement the balance, accrued arrears from July 1, 2009 to December 31, 2010 would be paid through the university IGR. The 2nd and 3rd tranches of the already approved N3 billion arrears for the four tertiary institutions would be paid, whereas the 2nd tranche shall be received as soon as work resumes, the last would be paid early in 2011).

Other agreements reached at the meeting include the state government's acceptance to embark on intensive development of teaching, research and physical facilities at LASU, the release of white paper on the report of the LASU visitation panel as soon as all inter-ministerial and inter-departmental issues are resolved by the state government, the involvement of LASU staff in the efforts at repositioning and rebuilding viable, qualitative and functional academic programmes and the decision not to victimize any member of the unions who took part in the industrial crisis.

Satisfied with the assurances and commitment received from Governor Fashola during the mediated discussion, the resolution noted that based on success achieved, the unions agreed to hold congresses on Tuesday, January 4, 2011 with a view of reviewing the four-month-old strike. ASUU LASU took the initiative by suspending the industrial action while the other sister unions followed suit after the Joint Action Committee (JAC) meeting at AOCOED on Wednesday, January 5.

Dr. Akinyemi, Chairman of ASUU in LASU, told Daily Sun that the resolution reached after the meeting with Governor Fashola tallies with the one the extended executives of the union submitted to the visitor of LASU. Dated December 29, 2010, it stated that the congress' decision was that academic staffs should resume academic activities immediately.

The ASUU chairman commended parents and students for bearing the pains of the four-month-old strike by the staff unions and urged the state government to live up to its promises in the interest of peace and harmony in the state as well as in the university.

In announcing the suspension of the strike after a meeting of JAC at AOCOED, Ijanikin, Lagos, on Wednesday, January 5, the Chairman of the Colleges of Education Academic Staff Unions (COEASU), AOCOED chapter, Mr. Adeyemi Adesanya said the governor has agreed to start the implementation in January 2011.

Before the public issuance of the communiquÃ© announcing the suspension of the strike, some staff unions' leaders took turns to address some issues in contention. The Chairman, Academic Staff Union of Polytechnics (ASUP), LASPOTECH, Mr. Olatunji Arowolo and the Chairman, Senior Staff Union of Nigerian Universities (SSANU), LASU Chapter, Funmi Sessi, told newsmen that the acceptance of the state government to meet the demands of the unions means the governor has seen reasons to implement the agreement between the various unions and FG.

In the communiquÃ© issued and signed by the leaders of the staff unions from the four state-owned tertiary institutions, they noted that the present disposition of the various Governing Councils and institutions management point to positive response and agreement to implement the various agreements as directed by the state government and noted that in suspending the four month-old strike, the plight of the students and parents was considered in its resolutions.

The resolutions include the immediate payment of the balance of 15 per cent salary increase and HATISS V1 arrears, the 53.37 per cent/56 per cent which started on July 1 2009 (which is to be paid in three installments within the first six months (January and July) in 2011). The issue of 'Lagos factor' in the present salary structure is also to be addressed by the various governing councils of the institutions involved while discussions on other salient issues would continue. With such resolutions, the unions finally suspended the four-month-old strike.

The NANS Zone D Coordinator, Eniola Opeyemi appreciated the decision of Governor Fashola to meet the demands of th staff unions but warned the state government not to use the opportunity to increase school fees as the student body would oppose it.

He disclosed that the strike has affected the students particularly the year students that ought to be at their various stations for the NYSC programme and hoped the state governemtnt would adhered to the agreement by releasing funds for the payment of the staff unions demands.

It should be recalled that the various staff unions made up of academic and non academic staff went on strike in September 2010 due to the failure of the state government to implement the agreement reached with the national unions and the federal government.