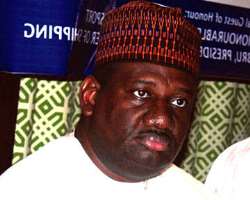 .Crisis in NIMASA
. Grand cospiracy against Omatseye
Shaddy deals of Yusuf Suleiman, Nigeria's honourable Minister of Transport, HMOT, in the Nigerian Maritime Administration and Safety Agency, NIMASA, a major revenue earner for the most populous nation in Africa has brought unending crisis and bickrering in the maritime agency.

Sources in the agency confirmed that Suleiman single-handedly gave approval to several mid-stream discharge in the sector against the law that established NIMASA, due to his partisan-relationship with Intels Nigeria Plc., a leading oil and gas company in Nigeria.

Dirty deals with Intels
Top officials of Intels firm who preffered anonymity due to backlash from security operatives told our correspondent that late President Umaru Musa Yar'Adua declined to grant the embattled company right to collect various fees on behalf of the Nigeria Ports Authourity, NPA. But, same decision was overturned by Suleiman some months after he became the Transport minister. His words: “We are not oblivious of the underground moves of the HMOT, Suleiman, which has brought retrogression to the maritime industry. Since he became a minister, most of his flight tickets for foreign trips were purchased by one Akeem, his personal assistant who liase with Intel's management for funds. We have the receipts and soon we shall tell the whole world how this man have ruined the enviable reputation of President Goodluck Jonathan's administration”.

How Govt. Audit report indicts the minister
The finding of a government audit report undertaken by Akin Omoriodion & Co accussed the agency board under the direct supervision of Suleiman of circumventing due process in its operation by splitting, over-pricing and awarding contracts worth billions of naira beyond their approval threshold. The report accused the Board of awarding contracts in local currency worth $1.863million between January to June 2010, with traces of fraud in refunds, cash advances and supplies. Unfortunately, the minister commissioned the project and claimed “NIMASA awarded 451 contracts during the period at a total cost of N5.4billion”.

Crisis in NIMASA
Further investigation confirms how several capital project for 2009 already advertised in the agnecy were delayed due to the 2009 NIMASA budget by the National Assembly which led to unenable to award the said contract. The said budget was released to a new management under Temisan Omatseye, a maritime expert on July 17, 2009, seven days after their appointment. The management continued the process relying on the adverts for pre-qulification. Appriopriation for the implimentation of the capital projects was received by the new team on October last year, but there were fears among some board members of NIMASA whose conduits for milking the agency had been blocked. For the first time, their Internal Generated Revenue, IGR, surged from $12million per month to $18.5million, which translated to reducing the staff renumeration to between 18-20 percent, thereby allowing a ratio of 45 percent for recurrent and capital expenditure.

The internal crisis assumed dangerous dimension after approval came from President Jonathan to HMOT and Foreign Affairs to support Mrs. Monica Mbanefo quest to be the next Secretary General of the International Maritime Organisation, IMO. The memo sent earlier through the office of HMOT stated clearly that all cost to be incurred for the campaign will be borne by NIMASA board. Right after Mr. President's approval, both Ministers swung into action and not verbal was communicated to all 169 member countries of the IMO, the UN, OIC, AU, D8 and other bodies.

Sources among the agency's board who felt pained with the turn of events explained that Williams Azuh, Nigeria Alternative Permamnent Pepresentative to IMO could not carry out his responsibility to give material and financial support to Mbanefo due lack of money. Eventually, he made a formal request and approval of £300,000 was given from NIMASA main account in Barclays Bank by the agency's board based on Mr. President earlier order. Before the staccato of crisis, only the sum of £26,666 was taken out of the lump sum paid directly to the housing-agents for an office, used as campaign secretariat.

EFCC Petition and cospiracy by NIMASA Board
Sensing that Omatseye is on the path of history as the first Director General of the agency to have increased the Cabotage Vessel Financing Fund from $11million to over $80million and released to Primary Lending Institution for onward disbursement to Nigerians, a petition was written against him by some aggrieved board members to HMOT for a probe. Without waiting for the outcome of the probe, the same board member summoned an emergency meeting and 'suspended' Omatseye against Section 11, sub-section 4, NIMASA Act of 2007.

Dockworker downtool in support of Omatseye
According to Nsikka Samuel, one of the dockworkers "un-ending crisis in NIMASA is due to the greedy ambition of some directors in the maritime agency in contract splitting and circumventing due process in suspending Omatseye, a maritime technocrat appointed by late President Yar'Adua in June 2009, with mandate to turn the fortune of NIMASA around, to boost the economy. All the dockworkers in NIMASA are solidly behind Omatseye because it is during his tenure that majority of us were sent overseas on training, which has impacted on the excellent overall performance of the agency. Without sounding boastful, there is no DG of the agency since its establishment that have achieved the success Omatseye attained. If in doubt, kindly go and find out. Majority of the dockworkers openly put up sad looks in demonstration of their disappointment at the decision of the board members because only recently NIMASA initiated the issuance of biometric identity cards to the workers: the first of its kind to encourage diligence among the dockworkers. Also, many of the dockworkers have been encouraged to put in all their best to ensure optimal performance in the maritime agency. We don't believe in the competence of the board members because they are only interested in their own selfish interest”.

In short, the removal of Omatseye and the Managing Director of Nigeria Ports Authourity, NPA, are deliberate scheme by the HMOT to frustrate directors in the maritime agency who are against his attempt to loot.

Profile of Intels' firm
Intels Nigeria Limited was established 25 years ago with the vision to develop an integrated logistics solution offering a complete package of facilities and services to the Oil & Gas industry in Nigeria.

Intels Nigeria, working in conjunction with Intels West Africa (Intels), has become established as leading supplier of oil and gas logistic support services throughout West Africa and particularly Nigeria. First in Nigeria and then in other countries. Intels pioneered the concept of the integrated 'one-stop-shop' oil service center bringing together terminal operations, logistics plus transit and supply services.