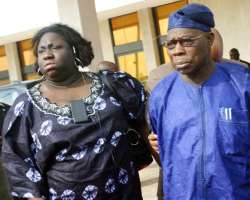 PHOTO: A FILE PHOTO SHOWS FORMER NIGERIAN PRESIDENT OLUSEGUN OBASANJO WITH ONE OF HIS DAUGHTERS AT THE PRESIDENTIAL WING OF THE MURTALA MOHAMMED AIRPORT LAGOS.
Listen to article

Nigeria's former President Olusegun Obasanjo ended a day of mediation in Ivory Coast's crisis on Sunday, saying he was optimistic it could be resolved but not ruling out military intervention to oust incumbent leader Laurent Gbagbo.

Gbagbo has defied huge international pressure to step down after a disputed Nov. 28 presidential election his rival Alassane Ouattara is widely believed to have won. Electoral commission results giving him an eight-point lead were overturned by the Constitutional Court, headed by a Gbagbo ally.

World leaders have recognised Ouattara as president of the world's leading cocoa producer and imposed sanctions on Gbagbo and members of his inner circle, but he retains the backing of the military.

Obasanjo made a surprise visit on Saturday night on a mission sanctioned by Nigeria, part of a flurry of initiatives aimed at persuading Gbagbo to give up power peacefully.

"My own exploration remains positive and to that extent ... I am optimistic," Obasanjo told journalists at a hotel in the West African nation's main city of Abidjan late on Sunday night.

He spent Sunday in talks with Gbagbo and Ouattara, who remains holed up in the lagoon-side Golf Hotel under guard of U.N. peacekeepers and blockaded by pro-Gbagbo military.

West African regional bloc ECOWAS, headed by Nigerian President Goodluck Jonathan, has threatened to remove Gbagbo by force if he refuses to go quietly. But any such military effort would be logistically daunting, and Gbagbo has dismissed such threats as interference in Ivory Coast's sovereign affairs.

Asked whether he still thought military intervention was the solution, Obasanjo replied: "When you have a problem you must consider all possible solutions."

"We know that an election has taken place. The whole world knows the result of the election. My exploration is to see how and where we go from here," he said.

In a sign that cracks were appearing in ECOWAS's tough stance, Ghana's President John Atta Mills announced on Friday that he would not take sides in the conflict and he did not believe a military intervention would solve anything.

Four other African leaders were in Ivory Coast at the start of last week to attempt to mediate, but came back empty-handed.

The United Nations says at least 210 people have been killed in violence since the election, including 14 in inter-ethnic violence in the western town of Duekoue in recent days.