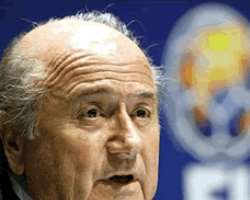 Blatter
Sepp Blatter on Thursday hit out at what he called the “envy and jealousy” of FIFA's success and vowed football's powerful world governing body would not bow to criticism.

FIFA and its 74-year-old president, who is expected to stand for re-election in May, came under heavy fire last year over alleged corruption.

It also faced condemnation by some for awarding the 2018 World Cup to Russia and the 2022 event to Qatar amid claims that the voting system of world football's governing body aids collusion and secrecy.

But Blatter remains defiant, telling the Asian Football Confederation Congress that the organisation continued to grow from strength-to-strength. “In 2010 we had some milestones in the history of football, starting with the first World Cup on the African continent, and what a success,” he said in his address.

“Then, we had the women's Under-17 World Cup which had its first Asian champions — South Korea — and then the decision of FIFA's executive committee to go to new destinations in 2018 and 2022.

“All these successes have created a lot of envy and jealousy in our world because you cannot satisfy everybody.”

He added that FIFA was powerful and rich enough to ward off any attacks. “The success story of FIFA can continue because we are in a comfortable situation, despite the criticism given to FIFA,” he said.

“We have the power and the instruments to go against any attacks that are made.” With elections at key confederations, as well as FIFA, due this year, Blatter cautioned that people needed to learn how to lose, as well as win.

“In 2011, we will have competitions but there is something else at stake, this is the elections in all the confederations,” he said. “Football is still a game and you learn to win, but also to lose, so I ask you to behave and conduct them in a democratic way.”