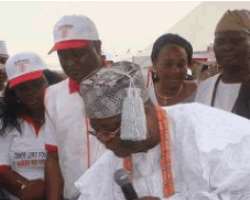 What a way to celebrate one's birthday ceremony? Ask the Deputy Governor, Central Bank of Nigeria, Mr. Tunde Lemo and he would probably tell you that the best way is to assist mankind.

That was exactly what he did penultimate Tuesday when he turned 51 in Abeokuta, Ogun State and he decided to donate a N50million clinic to the Red Cross Society of Nigeria. It was one of the promises he made on December 28, 2009 when he turned 50.

According to the chairman of the foundation, Mr. Kehinde Lawanson: 'What we are doing today is a fulfilment of one of the promises made by Tunde Lemo when he turned 50 exactly last year (2009) and he launched a foundation. We are grateful to God who spared his life to be able to reaslise this dream.

On the day of launching the foundation, we deliberately refused to accept donations from certain quarters. We refused to accept donation from any bank, because Lemo as a Deputy Governor of Central Bank, we do not want bankers or banks who will run foul of the banking laws to be contributing to the foundation and misrepresenting the key objective of the humanitarian gesture.

'As speak to you, this foundation has not received any money from any bank. What Lemo and his team did is to tell the world that we don't want to be compromised. Even the Bible says we should abstain from any appearance of evil. That we have done and inspite of this, God has been kind to us. Inspite of this, we have been able to raise N51 million in 12 months.''

Lawanson told the gathering including Alake of Egbaland, Oba Aremu Adedotun Gbadebo and the Olowu of Owu Abeokuta, Oba Adegboyega Dosunmu that the foundation had earlier donated N2million to a private university in need. The sum of N1million was used in supporting a girl that is in

need of kidney transplant.
Arrangements had been concluded to ensure that the clinic is completed soon for inauguration.

Oba Dosunmu described the ceremony as something unique in Egbaland: 'Today is a great day in the life of this sprawling city of Abeokuta. When we were very young, we never thought civilizaiton could reach this crescendo in Abeokuta. We are grateful to God.

'This place (the site of the proposed clinic) used to be a thick forest where we fetch fire wood to sell at Isabo. We thank God that Tunde Lemo has broken the ground. First, I was shocked to hear that you paid N5million for this parcel of land. But my mind was put at rest when you added that the location is strategic.

'I am sure, the Alake would have got you a better place, but if Alake failed you, Olowu would have got you a better place. May the Lord bless your efforts. Tunde Lemo is someone who is very humble;who will never acclaim himself or promote himself or make noise about himself. He is a man of great honour who is in a class of his own. He is a man who exhumes confidence not only about himself, but about friends and people around him. It is my prayer that may the Lord keep his life, save his life to see beyond the end of this project.

Olowu acknowledged the immesne contributions of the Red Cross and urged its volunteers not to rest on their oars: 'It is one organization in the world that brings succour to the needy across the globe. May God continue to help the volunteers of the international organistion.' Oba Gbadebo: 'Performance in academics, in the classroom has a direct correlation with your performance in life. Tunde Lemo is a man with the Midas touch. I remember very well that before he left Wema Bank, the bank was taken to a greater height.

'We are building a museum in Ake Plaace and I had a revelation that Tunde Lemo will be the perosn to deliver the museum. After I had told him about this, and after he held two meetings with his team, he came up with a master plan that will see us build a first class museum in the palace. ''When it comes to having a milk of human kindness, it is not the amount of money in millions or billions that you bequeath your childen that makes you a great man, but the number of lives you are able to touch that matters.

'No matter your position in life, there is still some little contribution and impact you can make on people. You don't have to be a millionaire or billionaire before you start assisting your people.' The state secretary of the Red Cross, Mr. Wole Aboyade described the donation of the clinic by Lemo as a noble course and urged other meaningful Nigerians to emulate him: 'Red cross is about showing to the needy that we care. There is need for all of us to assist our fellow brothers and sisters who are in dire need of both moral and financial assistance.

'Rather than stack our money away in foreign accounts, where it is actually not need, I urge you all to let it be in Nigeria where it can be used to make an impact as well as use it for the mankind.''

The national vice president, of the Red Cross International in Nigeria, Owelle Rocharas Okorocha was represented by Deacon Timothy Obajide. He urged Lemo to continue with his humanitarian works of assisting the less privilege and prayed that God will continue to bless him abundantly.